Growing up near Boston, Robert Preston had a different view of life, one literally seen through the lens of his father, Phil, an award winning Boston Globe photographer. Phil’s influence weighs heavily on his son’s paintings in pastels and oils, especially in works based on actual photos the elder Preston took, then developed in the 146 year old publications’s dark room.

“My father was a newspaperman and a storyteller,” Preston said. “When he died suddenly in 1977 at 53, all he left was a random assortment of prints…no negatives. I became obsessed with painting from these photographs. Since all his shots were black and white, I decided to invent the color, was thrilled with the result, and went on a hunt for more of his photographs. I knew my father was talented, but immersing myself in these pictures gave me a whole new appreciation of him and his work.”

Preston said the act of adding color to the images was a deeply emotional process of discovery, adding, “I got to collaborate with my long lost father. Sharing his talent is an honor. “Preston studied at Chicago’s Art Institute and then at the Boston Architectural College, but raising a family and running a fine art silkscreen printing business kept him from his own artwork. His business faltered in 1999 when Preston was 42, and oil painting felt, he said, like the next natural choice. Twenty years of mixing and matching color and interpreting other people’s artwork had provided skill sets he “was not aware of.” He taught himself to paint in a matter of weeks.

“I had mastered a profession that disappeared out from under me, so I decided to paint,” Preston said. In addition to recreating his dad’s stark photos of crimes, criminals, accidents, and disasters, the artist became interested in 19th century photography portraits of Lincoln, the Transcontinental Railroad, and the Native American photos of Edward Curtis. (Preston’s drawings of Native Americans are based on Curtis’s work.) Other diverse themes he has interpreted in his unique style include Tarot cards, Princess Diana, Civil War generals, and celebrities like Oprah Winfrey, Deepak Chopra, Shirley MacLaine, and the English occultist, artist, and novelist Aleister Crowley, who appears on the cover of the Beetles’ Sgt. Pepper’s Lonely Hearts Club Band album. His portrait of David Rockefeller garnered significant Google searches. 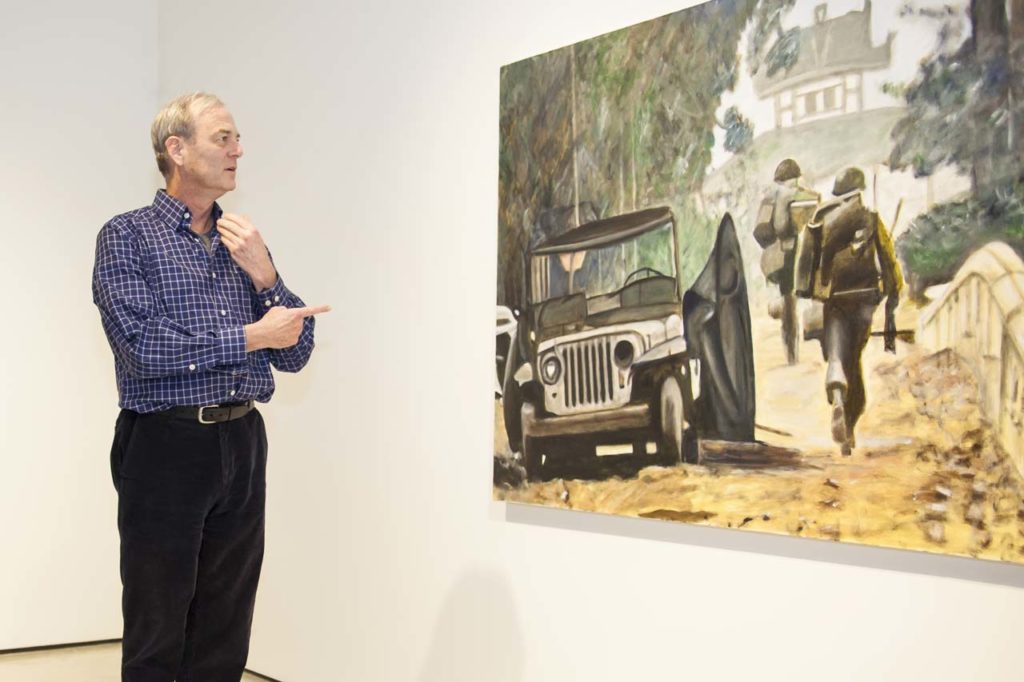 “My pastel ‘Cult Icons’ were a conscious attempt to break away from a reliance on photography,” Preston explained. “Each subject involved as much research as art making. Everyone is a rabbit hole that can take you on an unexpected journey. Often when I paint portraits, there is a moment when I sense my subjects looking at me. I immerse myself in them as much as possible.”

“Question everything,” featuring what he terms “intellectually curious pieces,” is the title of Preston’s recent exhibition at Red Bank’s Detour Gallery. He began doing one person shows in 2001, presenting diverse works in New York City, Hoboken, Jersey City, New Hampshire, Maryland, and Ohio, and has participated in group shows in Asbury Park and Long Branch, as well as Paris, France.

“I have always had an interest in the occult literally that which is hidden from view,” the artist explained. “My contrarian nature likes to counter the prevailing pieties. Tell me to look in one direction and I instinctively look the other way. I am happy to change my mind. It is my nature to question everything.”