WHAT BEGAN AS A SINGLE PHYSICAL THERAPY CENTER IN NEW JERSEY HAS SINCE GROWN INTO THE TRI-STATE’S LEADING IN-NETWORK PROVIDER OF PHYSICAL AND OCCUPATIONAL THERAPY SERVICES WITH MORE THAN 100 LOCATIONS AND COUNTING BUT ACCORDING TO THE CEO, EVERY PATIENT IS STILL TREATED LIKE A VIP

John Gallucci Jr. has been working in clinics since he was 13 years old. Now the president and CEO of JAG-ONE Physical Therapy, a 106-facility (and counting), comprehensive outpatient physical and occupational therapy empire with locations throughout New Jersey, New York, and Pennsylvania, the Staten Island native developed a fervor for rehabilitation when he began working with his parents’ surgical supply company as a young teen, delivering equipment to PT offices throughout Brooklyn.
“I was amazed with the idea of working with people who were injured or sick, assisting with their goals and getting them back to where they want to be,” noted Gallucci, who also worked as a PT aide at a local clinic while in high school. 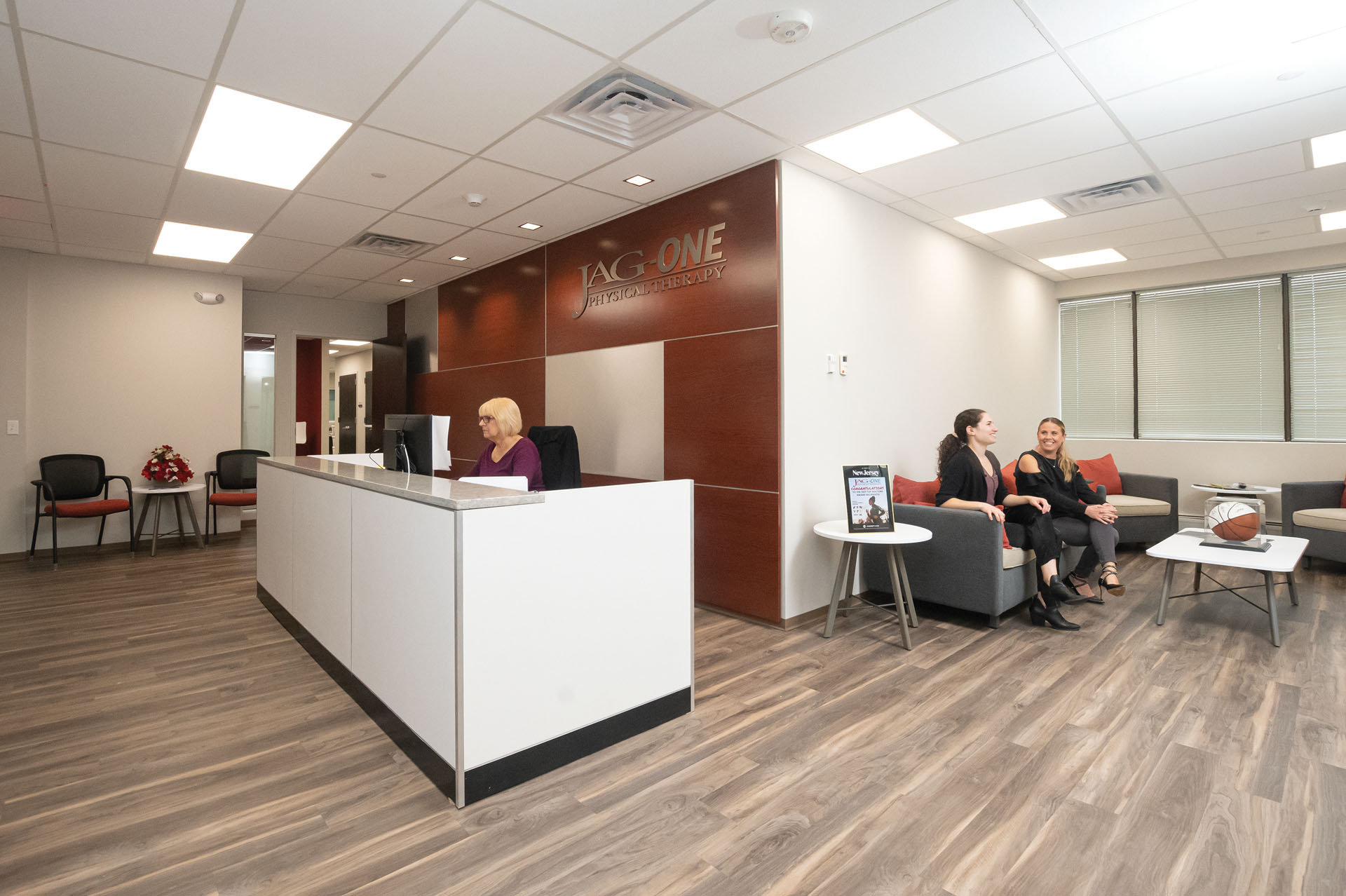 Today, Gallucci helms a massive operation, treating thousands of patients each year, from professional athletes to civil servants. In addition to traditional physical and occupational therapies, JAG-ONE offers hand therapy, sports medicine, worker’s comp, pelvic health, tele therapy, injury prevention, and other specialty services. The company can also boast the largest athletic training services in the state, supporting athletes of all levels, from elementary schools up to professional clubs. Gallucci has penned three books, received numerous awards and recognitions (including “Champion of the C-Suite” by ROI-NJ and Ernst & Young Entrepreneur of the Year), and made several radio and TV appearances, including ESPN’s Outside the Lines.

It all began at a single 1,800-square-foot facility in West Orange, NJ. It was 2004, and Gallucci, armed with a master’s degree in athletic training and doctorate in physical therapy, had already built a wildly successful career in sports medicine, working for prominent teams like the New York Knicks, New York Red Bulls, and New Jersey Devils, when he decided to launch his own practice. From day one, JAG PT’s business plan was to offer performance-based, goal-driven services, catering treatment to the individual. According to the founder, positive motivation and a sense of community are just as vital to healing as equipment and technique. He found early success, but he quickly realized that in order for JAG PT to prosper, he would need to think bigger. “Ultimately, I’m a student of healthcare,” noted Gallucci. “I was watching the trends throughout New York, New Jersey, Pennsylvania, and Connecticut, and I realized that a simple one-man practice wasn’t going to get the visibility from the consumers or the payers.” 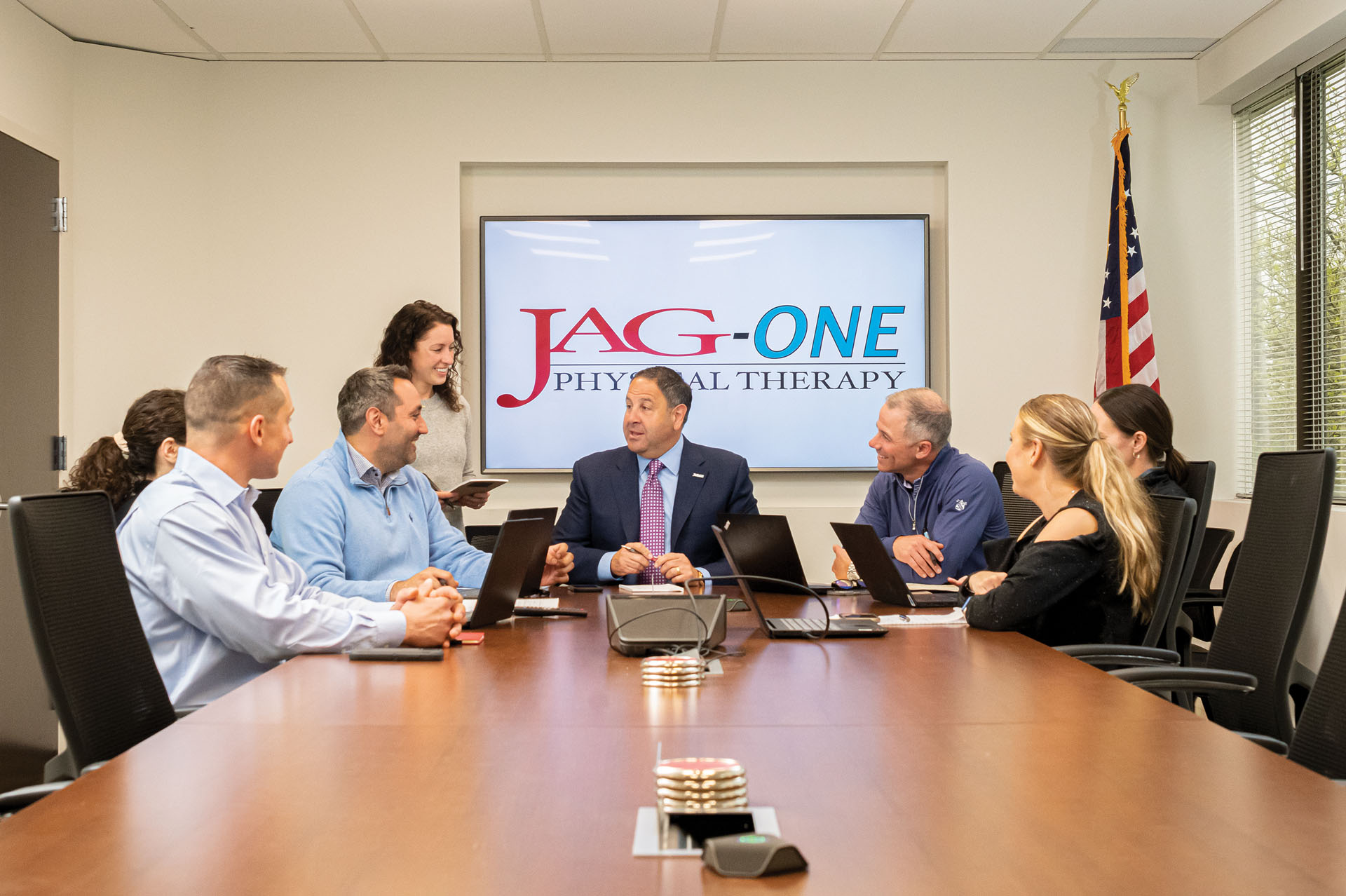 The CEO then opened a second practice in Warren Township, followed by a third in Bergen County, and in a few short years, the JAG PT nameplate swelled to 18 facilities throughout New Jersey and New York. But industry wide, the consolidation trend was still on the rise.

“We had a great brand and wonderful people working with us, so I thought, ‘How do I keep that team together but continue to succeed?’ I had colleagues who had 20 locations in New York under the legacy company One on One PT. We came together in 2018 under the name JAG-ONE Physical Therapy, with 38 total locations.”

From there, growth surged, and today JAG-ONE has a presence in Brooklyn, Long Island, Manhattan, New Jersey, Pennsylvania, Queens, Westchester, Rockland, and Gallucci’s home borough of Staten Island. Just this year, several additional facilities opened, including two in Staten Island located on South Avenue and in Tottenville. But even amid massive expansion, the CEO’s core ethos hasn’t changed. 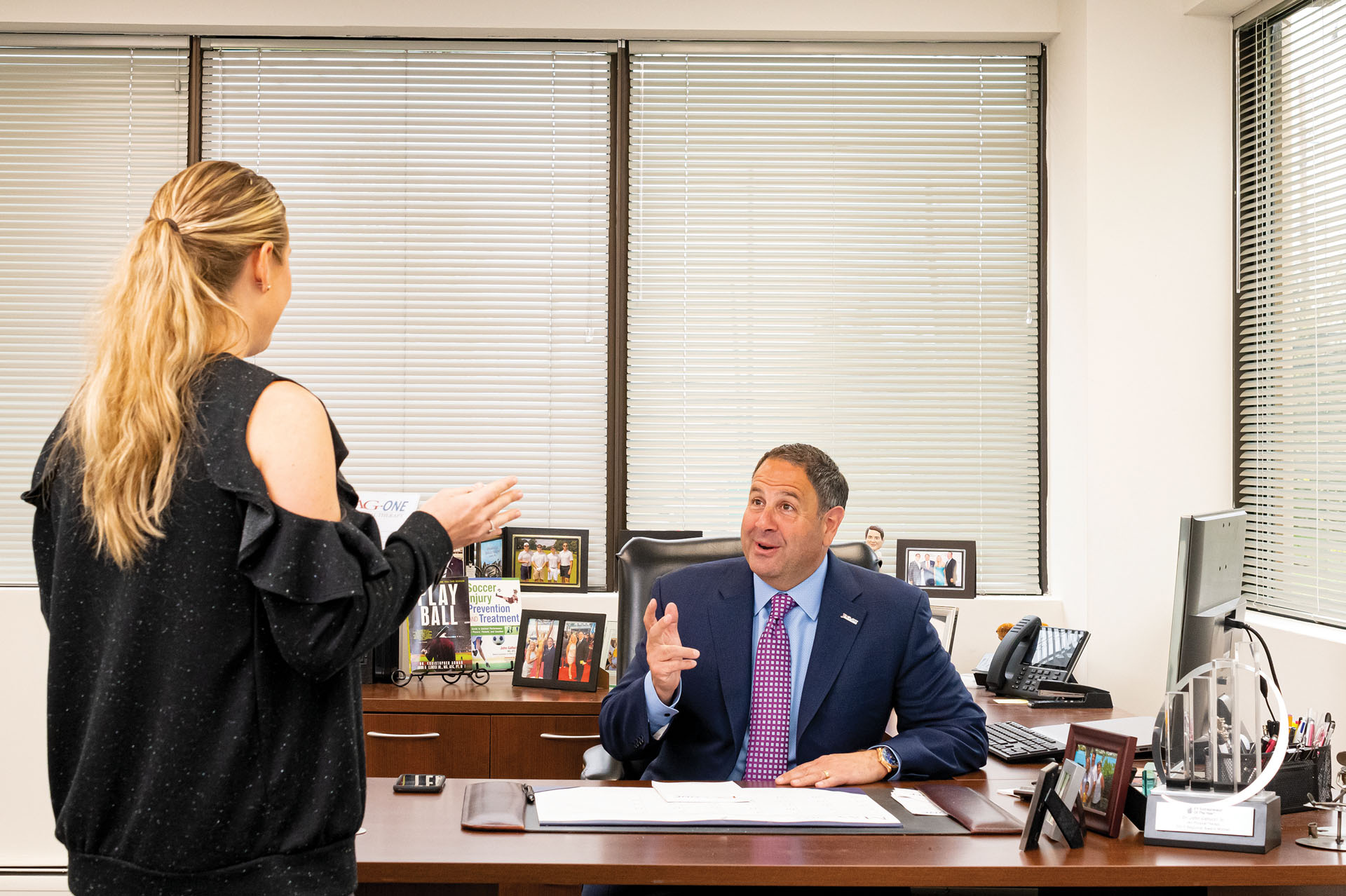 “The patients, consumers, doctors, healthcare systems, and payers all love that we never changed our culture,” he said. “We are an outcome-based company driven by each patient’s goals. We accept all in-network payers, plus Medicare and Medicaid, so anyone can come to JAG-ONE and get back to the life they love. We want to be a part of the direction, returning people to the state of success and living their life.”

Today, a JAG-ONE facility averages 3,000 square feet. The original facility still stands in West Orange, but its footprint has increased to 10,000 square feet. Inside each location, patients will find the same state-of-the-art equipment typical of an elite gym. On any given day, there are people doing ladder drills, hops, and fireman carry drills, all in a bright, open space.

“We don’t believe in closed-wall physical therapy,” added Gallucci. “All our facilities are spacious and have big windows. Therapists can talk to multiple patients at once, and patients can talk to other patients. It’s a social event; it takes away the pain and focus of the work.”

With 28 years in sports medicine under his belt (Gallucci currently serves as the medical coordinator for Major League Soccer), the CEO has worked with some of the biggest names in the business, though he noted he applies the all-star treatment to each patient that walks through the door

“Everyone is treated like a VIP,” he said. “If a painter, police officer, or carpenter uses their body for work, they should be treated just like the forward for the New York Knicks. We look at everyone’s goals and work with them to achieve those goals. We are proud to say that if grandma’s goal is to garden and kneel down after a full knee replacement, our goal is to get her back to full function.”

Many professional athletes still seek out Gallucci’s method, and he’s helped several injured players achieve a full recovery after being told their careers were over, but those aren’t the success stories he’s compelled to tell. It’s the fireman who was told he would never run again after tearing his ACL (today, this same man is running half marathons in his retirement following a lengthy career with the New York City fire department), and a woman who, upon suffering a horrific accident, still seeks out his services 25 years later.

“When I was a student, I treated a woman who was involved in a traffic accident in Manhattan,” he recalled. “She was crossing the street when a taxi cab lost control, jumped the curb, and crushed her against the building, causing three different injuries to her legs. She had to learn how to walk again. Over the years, she’s had eight more surgeries, and each time she comes to see me. Today, anytime I speak on Staten Island, she and her husband come to cheer me on. It’s incredible.” 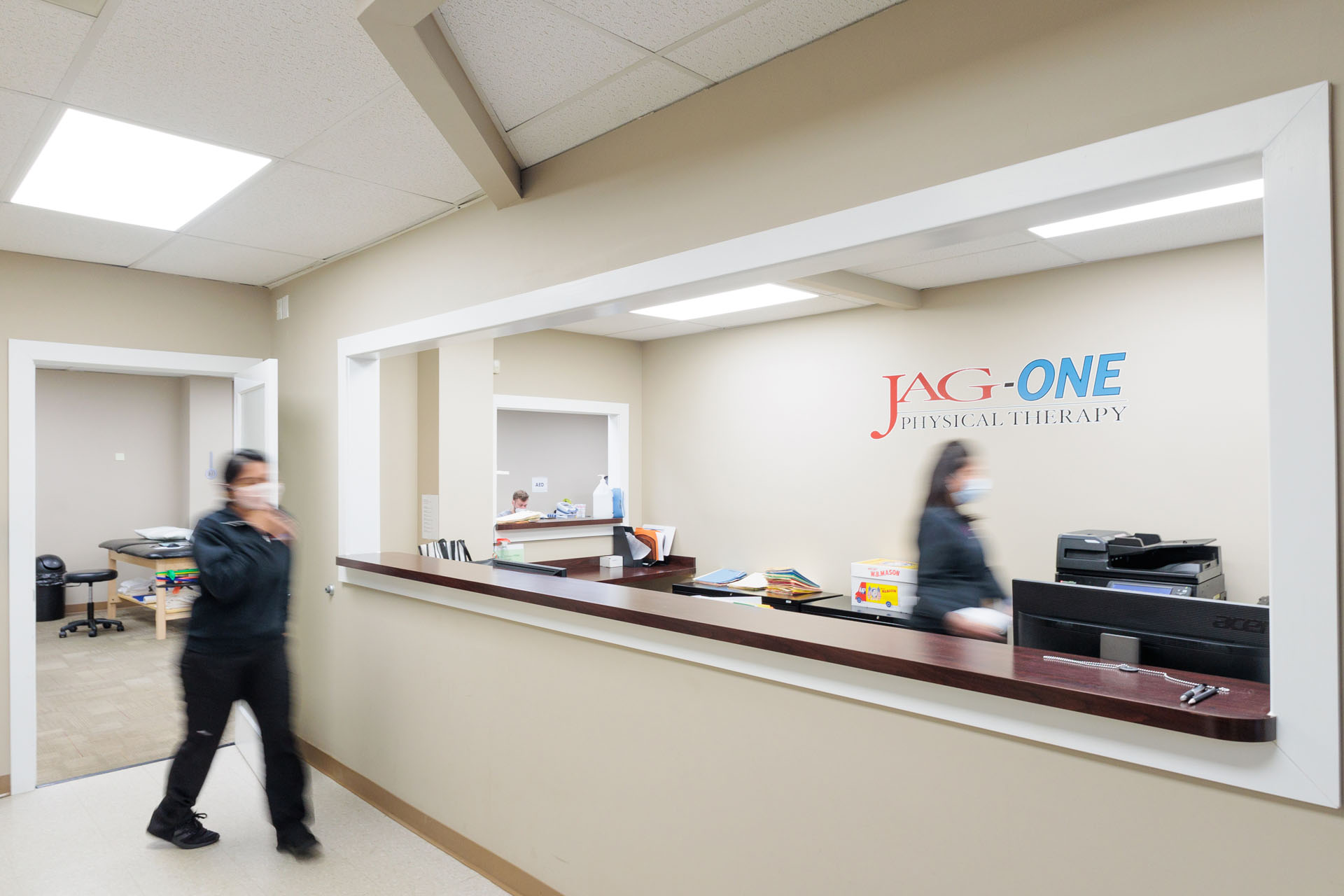 As the president of a “homegrown” enterprise, Gallucci and his vast team are actively involved in investing in JAG-ONE’s local communities through various nonprofit organizations and charity events. He’s involved with several organizations, including the Teddy Atlas Foundation, the Arthritis Foundation, the American Cancer Society, and one particularly close to his heart, the Valerie Fund, which supports children with cancer and blood disorders. Each year, JAG-ONE hosts a 5K to raise money in support of the organization.

The husband of 31 years (Gallucci and his wife, Dawn, grew up only nine houses down from each other and were high school sweethearts) is also a prolific public speaker, averaging two speaking events each month – but only because his staff caps him at that.

“They know I’d speak every day if I could,” laughed Gallucci. “I lecture all over the country, at junior and high schools, colleges, and more, on a variety of subject matters. I love to get out in the local community and hear what they have to say. This is a homegrown company, and I’m proud to say we’re still home.”