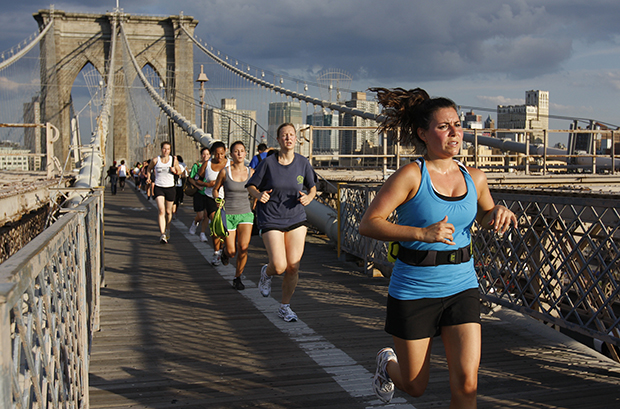 The concept is so brilliantly simple, it’s a wonder no one thought of it earlier: using the magnificent Brooklyn Bridge as your own public gym. Then along came trainer/nutritionist Ariane Hundt, founder of Brooklyn Bridge Boot Camp (BBBC).

Hundt, who grew up doing parkour on benches set up in the woods of her native Germany, just adapted that workout to her new home.

“When I came to New York, I fell in love with the Brooklyn Bridge,” she said. “You get such a great perspective of the city. I just started exercising there.”

A certified AFAA trainer since 2002, Hundt did sessions with bodybuilders and took numerous classes and seminars. (“My appetite to learn was insatiable,” she admitted.) After completing a nutrition program in 2007, she left her job doing market research at a small pharmaceutical company, and in 2008, officially made BBBC a reality.

“Brooklyn Bridge Boot Camp is a workout with a view that can’t be beat,” she explained. “No gym comes close. You’re distracted enough by the surroundings to make it through a very challenging process without realizing that you’re using every muscle in your body.”

A huge fan of a no-overhead, no-fluff, bare-bones exercise, Hundt developed a high-intensity interval training regimen involving no equipment except for the local landmark’s walls, benches, and railings (and resistance bands). It usually begins by running up the bridge’s stairs to its first tower. (“That first half mile is a killer,” she conceded.)

Hundt has an agreement with the Department of Transportation not to impede traffic and to keep the workout flowing. “Which is no problem,” she explained, “because the pace is fast and we’re constantly moving from one spot to another. It’s an effective, fun workout without the monotony of the gym. In just five sessions, you can actually see results.” Her 60 minute BBBC burns an impressive 800 calories.

“My clientele comes to me because they want to change their bodies,” Hundt offered simply, “but unless you’re challenging it, you’re not going to see a difference.” Led by Hundt or one of her hand-selected team of trainers, BBBC classes also take place in Prospect Park, Central Park, and on the Upper East Side. Sessions for first-timers are $15; after that, a single class is $20 with five-packs priced at $95, 10-packs for $170.

As a personal trainer for more than a decade, the founder has seen health fads come and go.

“Juice cleanses are a total waste,” she said. “To me, they’re the new eating disorder. It’s not possible to detox in five days—you’re just losing bowel content. You don’t learn anything about your body in a cleanse like that.” Hundt’s healthier alternative is her three-week Nutribullet Detox which includes dietary guidance, training (indoor or outdoor), personalized nutrition calculations, and a BBBC goodie bag.

Other common mistakes include just doing cardio and not having a clean diet, with the trainer adding that “Working out without dietary changes isn’t very effective. Change starts with thoughts and attitudes. Quick changes don’t last. I’m big on educating people about proper nutrition and taking care of themselves. Which means getting enough sleep, not drinking too much alcohol, or eating too much sugar.”

Hundt is also on her way to making BBBC global.

“I’ve been asked to write books, and investors have approached me about bringing the method to Germany,” she said. “Ideally, I’d like to open my own studio but am looking for the right investment partner.” For now, Hundt’s BBBC workout DVD is a solid seller and her classes are packed.

We caught up with Hundt the day before she left on a seven-day Costa Rica Surf & Boot Camp Retreat that includes daily boot camp, surfing, yoga/Pilates, plus a massage to top it all off. “I also do three-day retreats at a beautiful Tibetian center upstate New York,” she added, smiling.

Called one of New York’s toughest trainers, she sports the unofficial title at BBBC of “Butt-Kicking Boss,” but comes off more gently. “I’m just passionate about helping people feel good in their own skin,” Hundt said.