GUIDED BY AN UNWAVERING RESOLVE TO RETURN ITS NATIVE ISLAND TO ITS FORMER ECOLOGICAL GLORY, THIS LUSCIOUS ECORETREAT IS PERHAPS THE PLANET’S MOST STUNNING EXAMPLE OF ETHICAL LUXURY

Scattered along the northern end of the submarine Mascarene plateau, located approximately 1,000 miles from the East African mainland, the Seychelles appear like Mother Nature’s treasure chest hidden in the emerald-tinted waters of the Indian Ocean. Warm ocean currents yield armies of marine life, while enchanting land dwellers like white fairy terns, spotted tree frogs, and hefty fruit bats hide in the trees. With such a high percentage of its animals and plant species considered endemic – including the Aldabra giant tortoise, which can swell to a staggering 600 pounds the tropical nation is often called the Galapagos of the Indian Ocean. 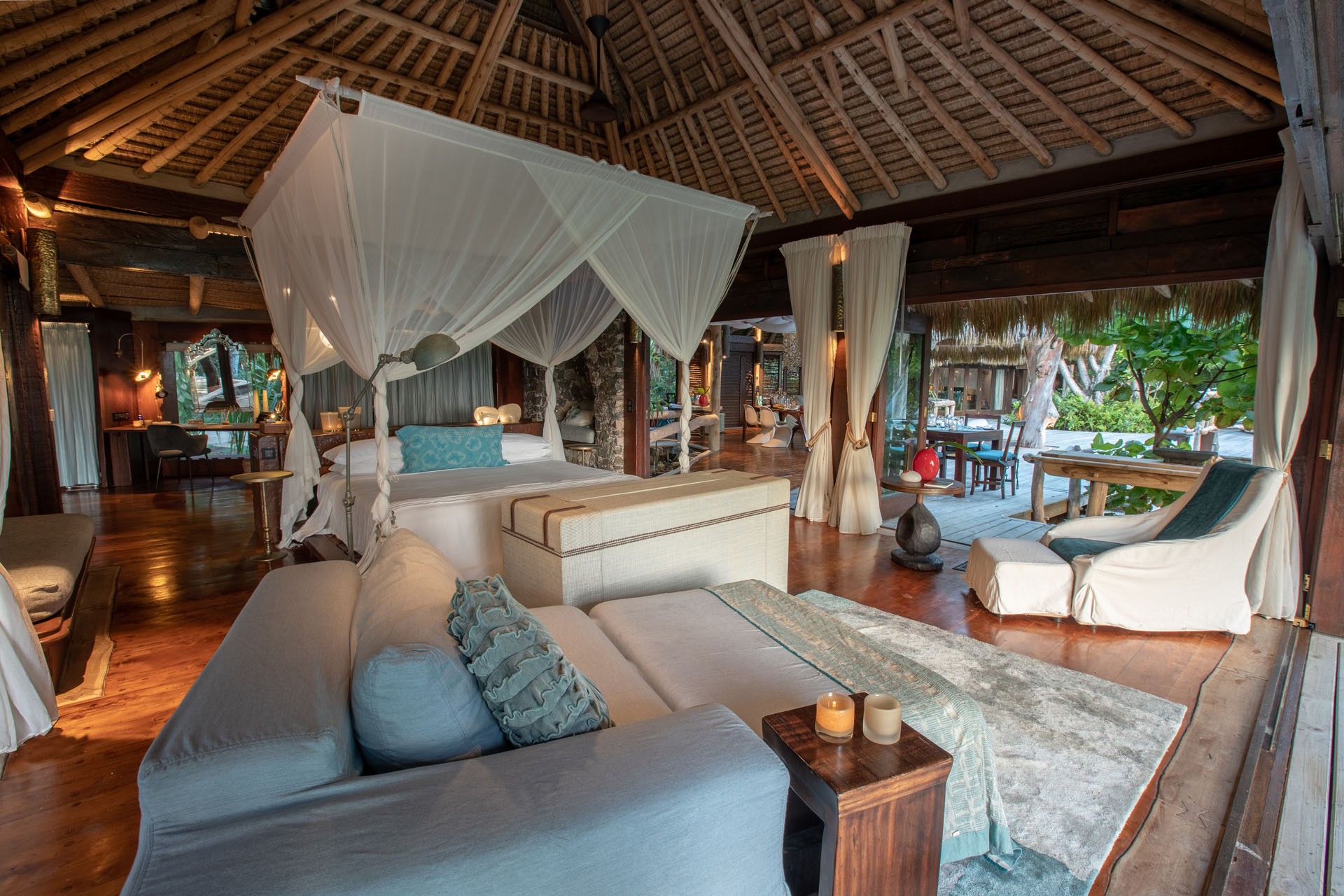 There are an estimated 697 total hotels and resorts in the country, from humble guest houses to six-star, celebrity-frequented palaces along the sandy coasts, but few are considered as exclusive as North Island. Named for the granitic islet it inhabits, the ultra luxurious retreat feels like an extension of its wild natural setting, comprising breezy open spaces built around century-old trees. Sharp granite peaks descend into palm-tree peppered white sand beaches. The surrounding waters appear calm on the surface, but underneath a vast ecosystem of marine life takes up residence in the many coral reefs.

The island’s post-human story began in 1609 when, in the Seychelles’ first recorded landing made by seafarers, the English East India Company vessel Ascension reached the uninhabited shores of North Island (Captain Sharpeigh and his crew reported the abundant population of giant land tortoises). The island was purchased by the wealthy Beaufond family of Réunion, France, in 1826, who maintained ownership until the 1970s, using the fertile soil as a fruit and spice plantation. Following the collapse of the copra market, the plantation fell into disuse, and alien plant species began to eat at the indigenous flora and fauna. In 1997, an ecotourism venture from South Africa purchased the island with a plan to preserve and improve the natural ecosystem while offering affluent and environmentally conscious wander lusters a true private island experience. Royals William and Kate famously honeymooned here in 2011. 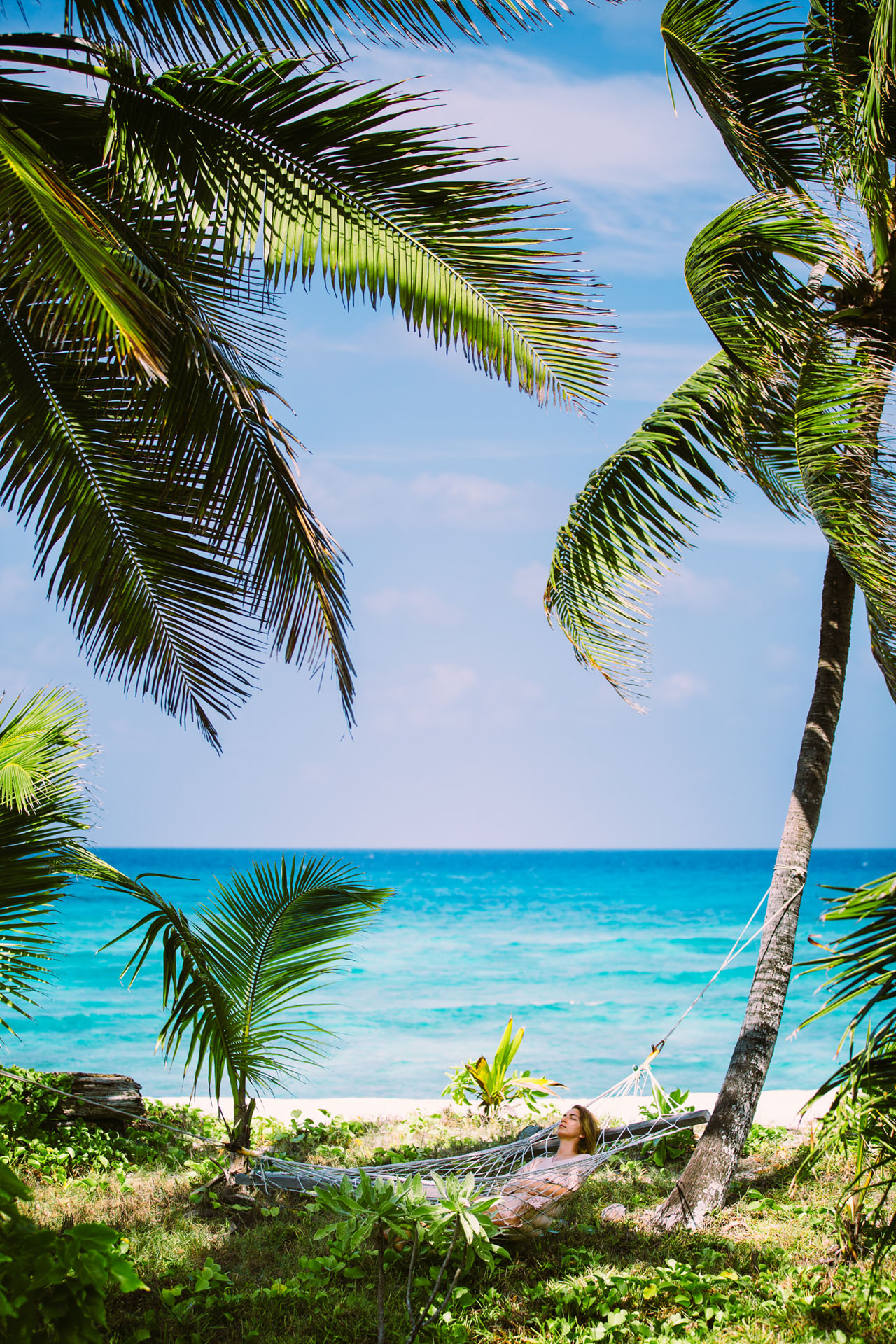 GETTING THERE
Located among the country’s inner islands, North Island is only accessible two ways: helicopter or speedboat. e former departs from Mahé, the Seychelles’ main island. e ride is an enchanting 20 minutes, skimming unspoiled stretches of sparkling water dotted with the occasional green and granite. Suddenly, the ocean splits to reveal the densely jungled island, just shy of 500 total acres, and guests land on the property’s jetty helipad. Seafarers can opt for a speedboat pickup from Silhouette Island, though the approach isn’t quite as dramatic as from the sky.

VILLAS
Each of the island’s 11 one-of-a-kind villas ten beachfront bungalows plus one palatial 8,000-square-foot signature villa were handcrafted of local materials harvested during the island’s rehabilitation process. Unlike many of the world’s top-tier resorts, the dress code here is whatever the guest fancies, and visitors are encouraged to ditch the shoes as often as possible (in fact, the resort’s tagline is “barefoot luxury”).

Each villa is completely screened from view, tucked deep into the natural tropical foliage. The only break in ocean view stems from the occasional old growth palm. 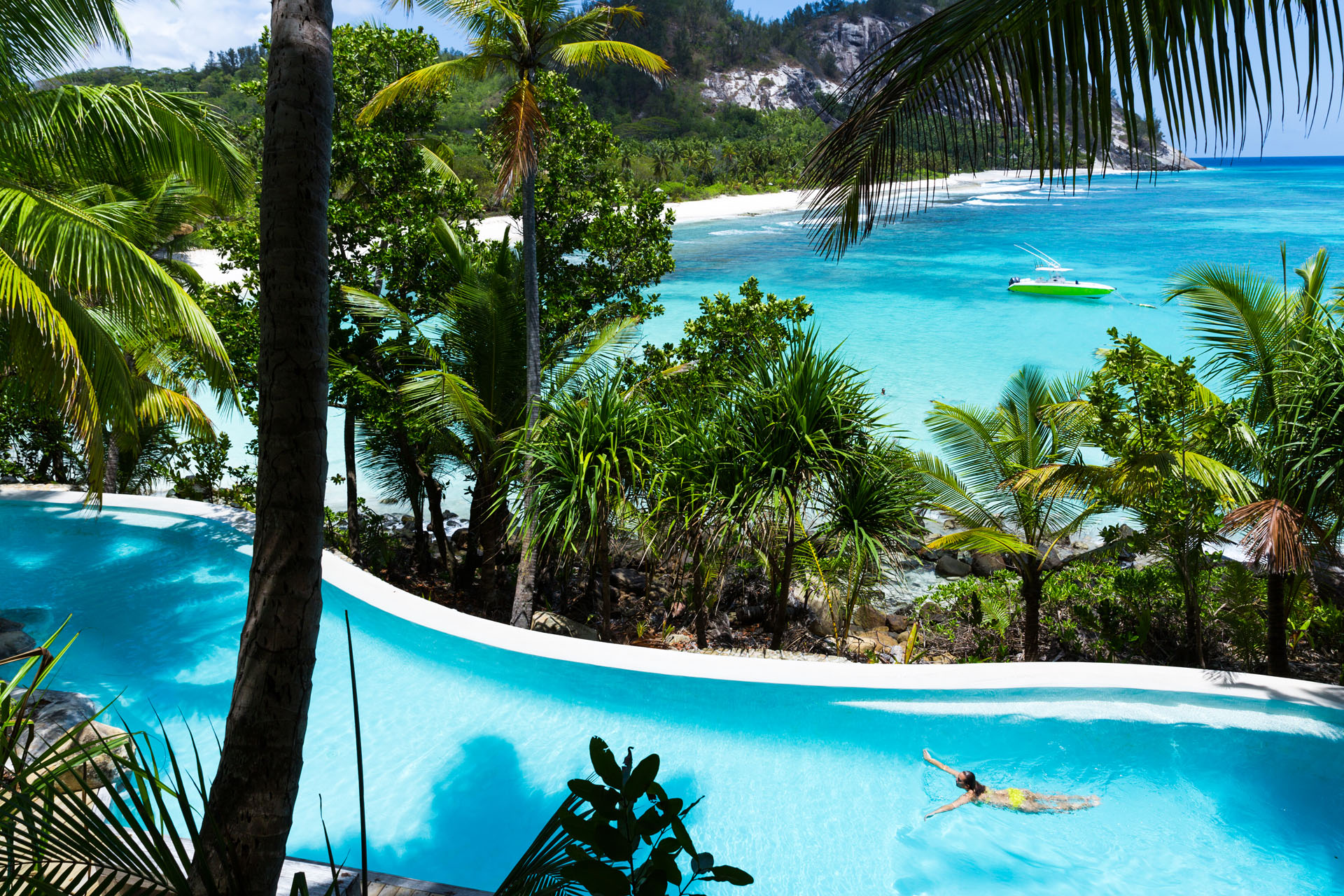 The ten beachfront bungalows stretch 5,000 square feet of open space. High vaulted ceilings rest atop natural wooded columns, blurring the lines between indoors and out to allow the sea-tinged air to waft throughout the interior. Guests are awakened each day by the gentle sounds of waves lapping and exotic birds whistling their morning song. Luxuriate in a fluffy bathrobe and watch as the island springs to life from the comfort of your large outdoor terrace. Each bungalow features a private plunge pool, deep soaking tub, several daybeds, and a fully stocked snack bar. Guests are given an electric golf buggy for transportation throughout their stay

The island’s crown jewel is One North Villa, perched on granite boulders on the far end of East Beach. The tiered hideaway cascades down the cliff and culminates in tepid emerald waters, with each of its numerous decks built around a healthy coconut grove. Guests cross a hidden lead wood bridge to access the space, and once inside, they are treated to a treasure chest of surprises. Find a snuggling nook tucked under a koko-d-mer, drink in the sun from an open-air daybed, or catch an African sunrise from your private splash pool. 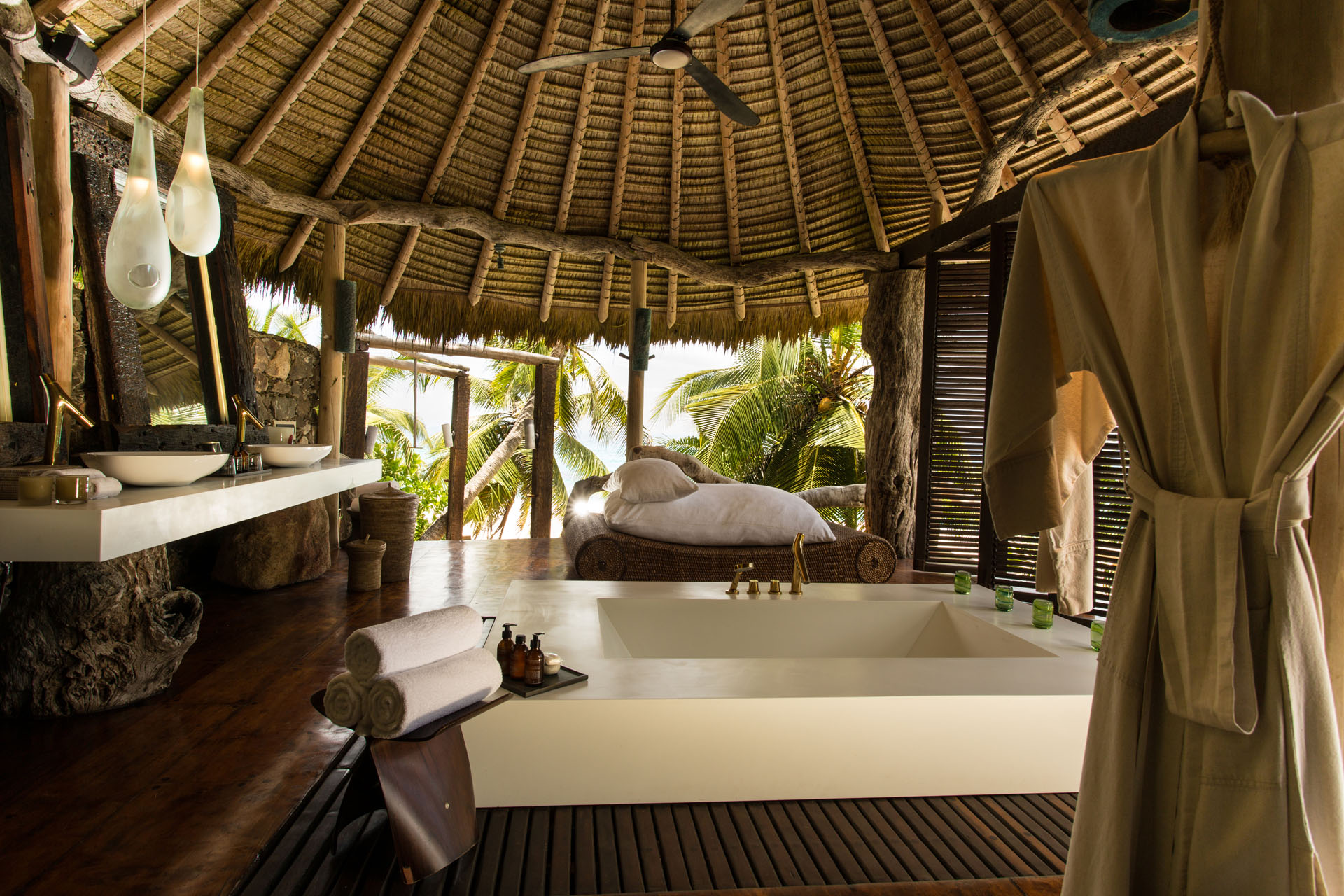 ACTIVITIES
The philosophy here is no two guests should have the same experience. Each itinerary is hand-written for the individual and can range in scope and intensity from near-constant action to gloriously languid. Choose from a massive selection of pre-curated activities, or make off menu requests and the dedicated concierge will do their best to fulfill every island fantasy. With the ocean’s many coral reefs, scuba diving is first rate, and the resort’s Dive Center offers full PADI tuition and certification. Dive master Daniel and his team of expert Seychellois divemasters are eager to share their intimate knowledge of the local reefs, home to several species of sea turtle and more than 1,000 species of fish. Additional ventures include snorkeling, fishing, kayaking, stand-up paddle boarding, romantic beach picnics, full-day boating excursions, sunrise yoga, cycling, and more. Take a pizza-making lesson or embark on a private treasure hunt with the kiddos, or indulge in a Swedish massage in the open air spa or in the comfort of your own villa. 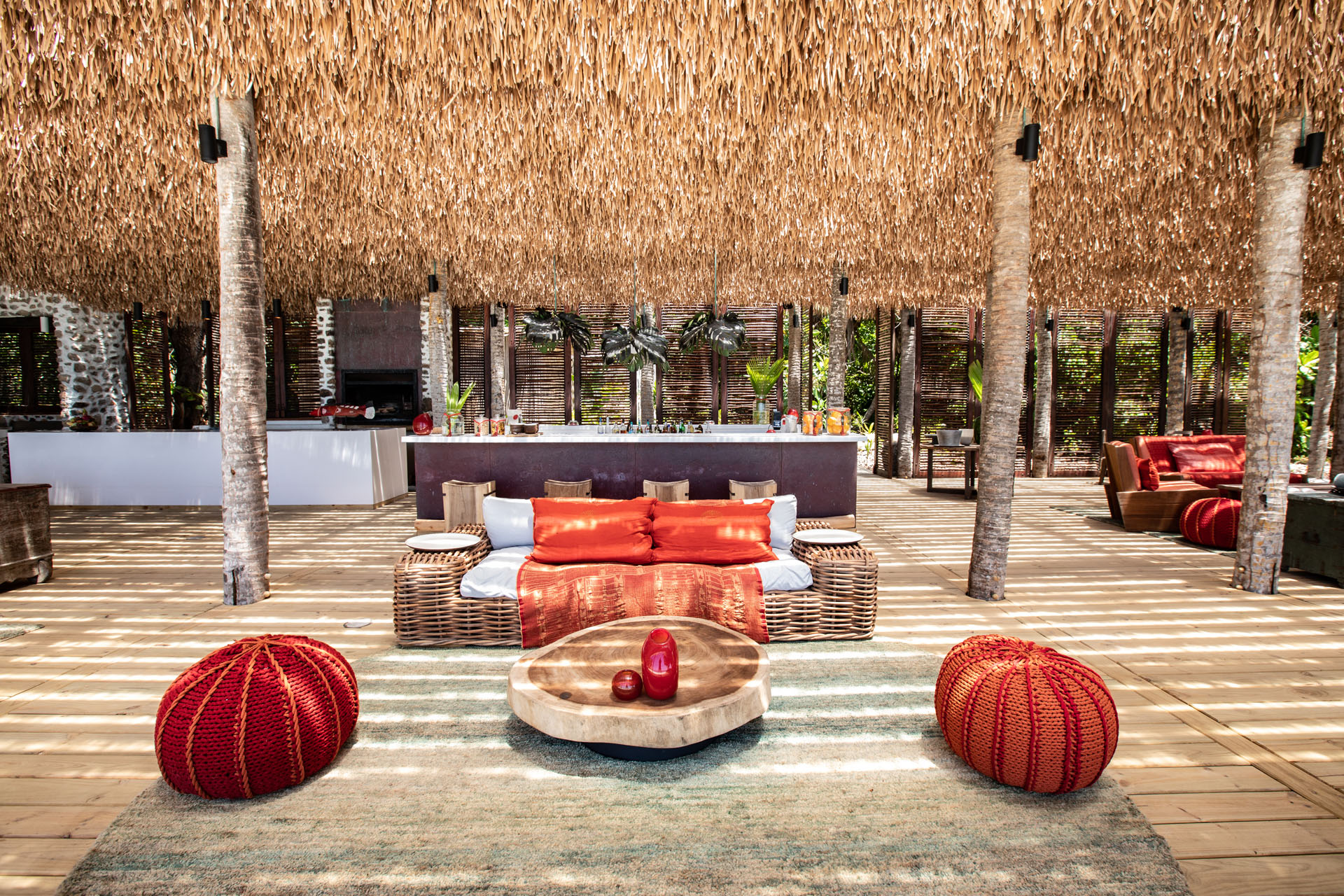 DINE AND DRINK
North Island’s devotion to crafting bespoke experiences especially shines in the resort’s many kitchens. The dining options are divided into four categories: Laid Back and Sunset Beach are dedicated locales, while Private and Destination bring the meals to the guest, setting up picnics on the sun-toasted sand, atop a granite cliff, or next to your patio’s plunge pool. The menus, spearheaded by the charismatic Michelin-starred chef Akira Back (who owns several top-rated restaurants throughout the world, from Vegas to Dubai), can be tailored based on taste and mood. Laid Back offers candlelit romance against a sandy backdrop, where the chef pulls from the day’s bounty to prepare decadent seasonal varieties like squid ink linguini with lobster, freshly caught red snapper, langoustines, and local octopus. Lucky guests might even spot a sea turtle nesting on the nearby beach!

Sunset Beach offers casual bites and sips, like bubbling Napoli pizzas, fresh salads, and tapas-style BBQ snacks, plus refreshingly crisp cocktails, wine, and beer. Lovingly referred to as the “rough” side of North Island, Sunset encourages mojito-fueled dancing, laughter, and unabashed revelry as the sun melts in the distance.
The in-villa dining menu blends home style classics with African twists (think Creole curry), and chef Back is on deck to honor any special requests. Destination dining offers numerous places to sneak away for an intimate meal across the island’s 500 acres, from the secluded Honeymoon Beach to the massive wine cellar, where the resort’s resident sommelier will pour vintage labels from around the globe. Additional options include the Cross at the base of Spa Hill (where an attendant will light a bonfire), the edge of the main swimming pool, the Helipad, and the library. 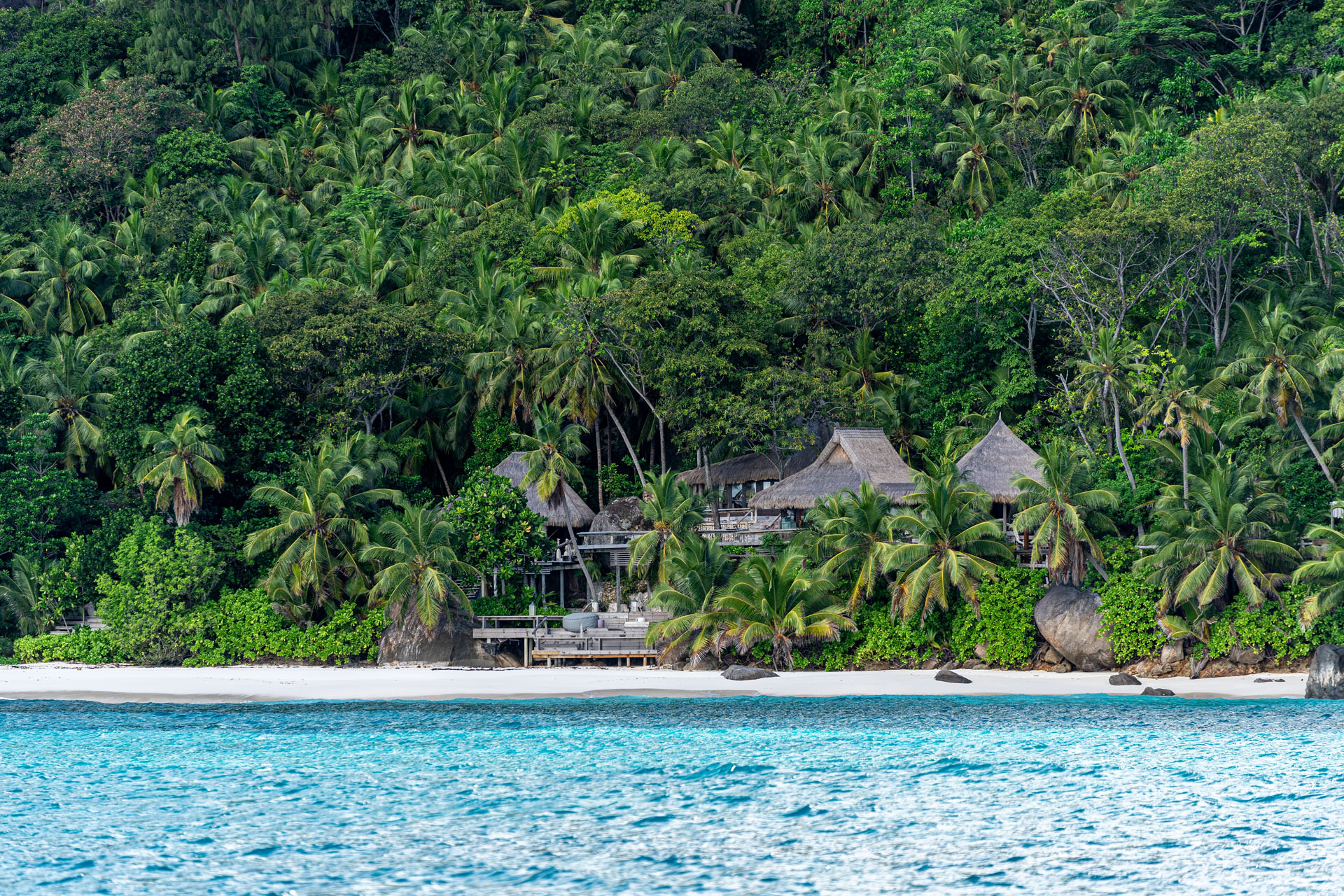 CONSERVATION
When the new owners first took control of North Island, they discovered a forgotten paradise, a former ecological diamond that, through years of neglect and exploitation, had become overgrown with invasive alien species, threatening the island’s indigenous plants, decimating the bird life, and drying up the marshland. The owners immediately employed a massive island rehabilitation project, dubbed Noah’s Ark, which is still ongoing today.

Efforts included eradicating many feral alien species, such as rodents, cats, and cattle. Invasive plant species were cleared and replaced with thousands of indigenous plant and tree seedlings. As a result, several Seychellois bird species have returned to the island, including the Seychelles Blue Pigeon, Wedgetailed Shearwaters, and White-tailed Tropicbirds. Critically endangered Hawksbill and Green Turtles are nesting on the sugary beaches once again in increasing numbers. 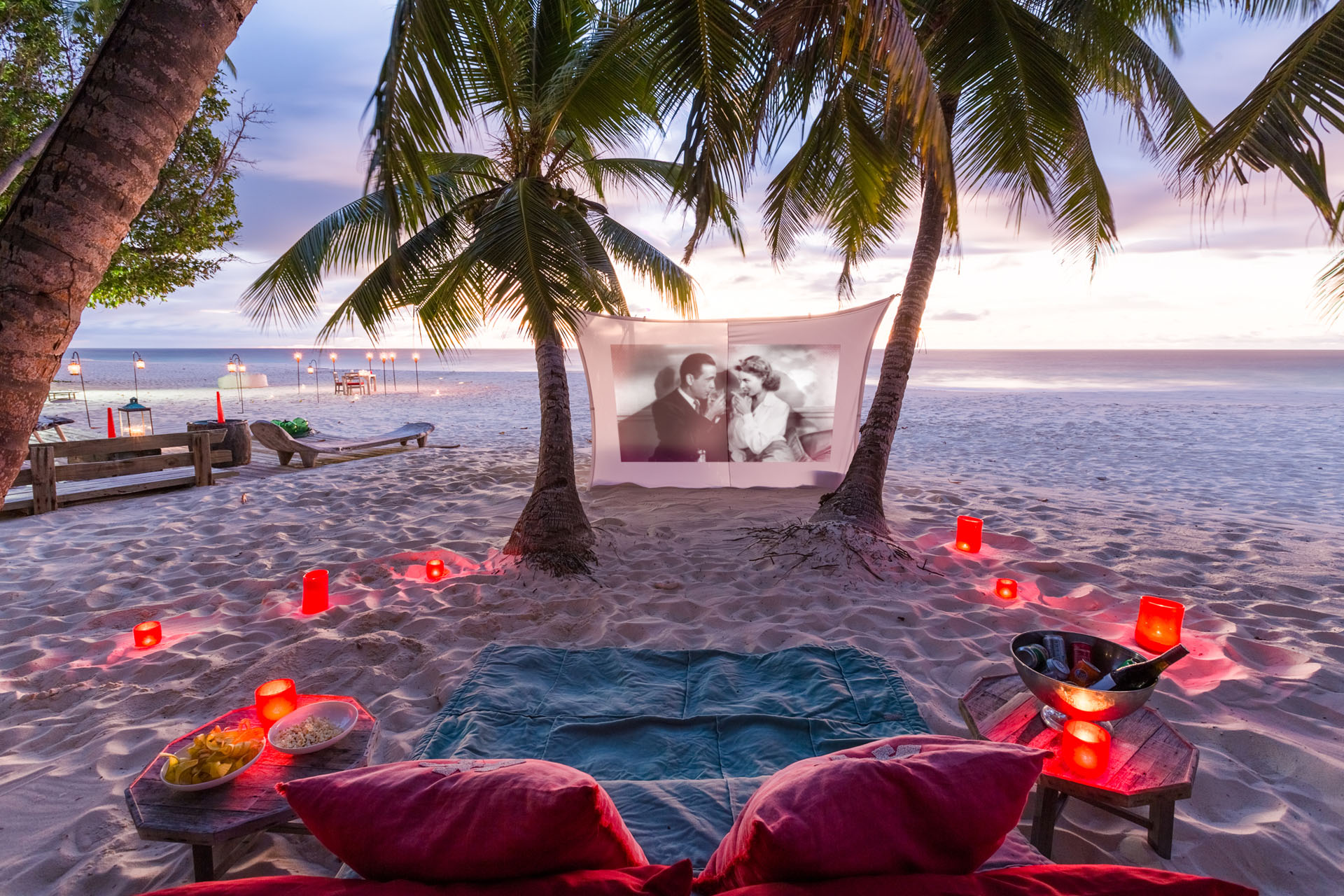 Resident environmentalists and ecotourist volunteers comb the beaches each morning to collect any fallen debris to ensure it doesn’t reach the ocean. Additional sustainability efforts include strict waste management processes including extensive recycling, gray water systems, and the use of a sustainable water bottling plant. Day by day, North Island’s goal is to turn back the ecological clock and return the island and all of its flora and fauna to its former, pre-human glory. 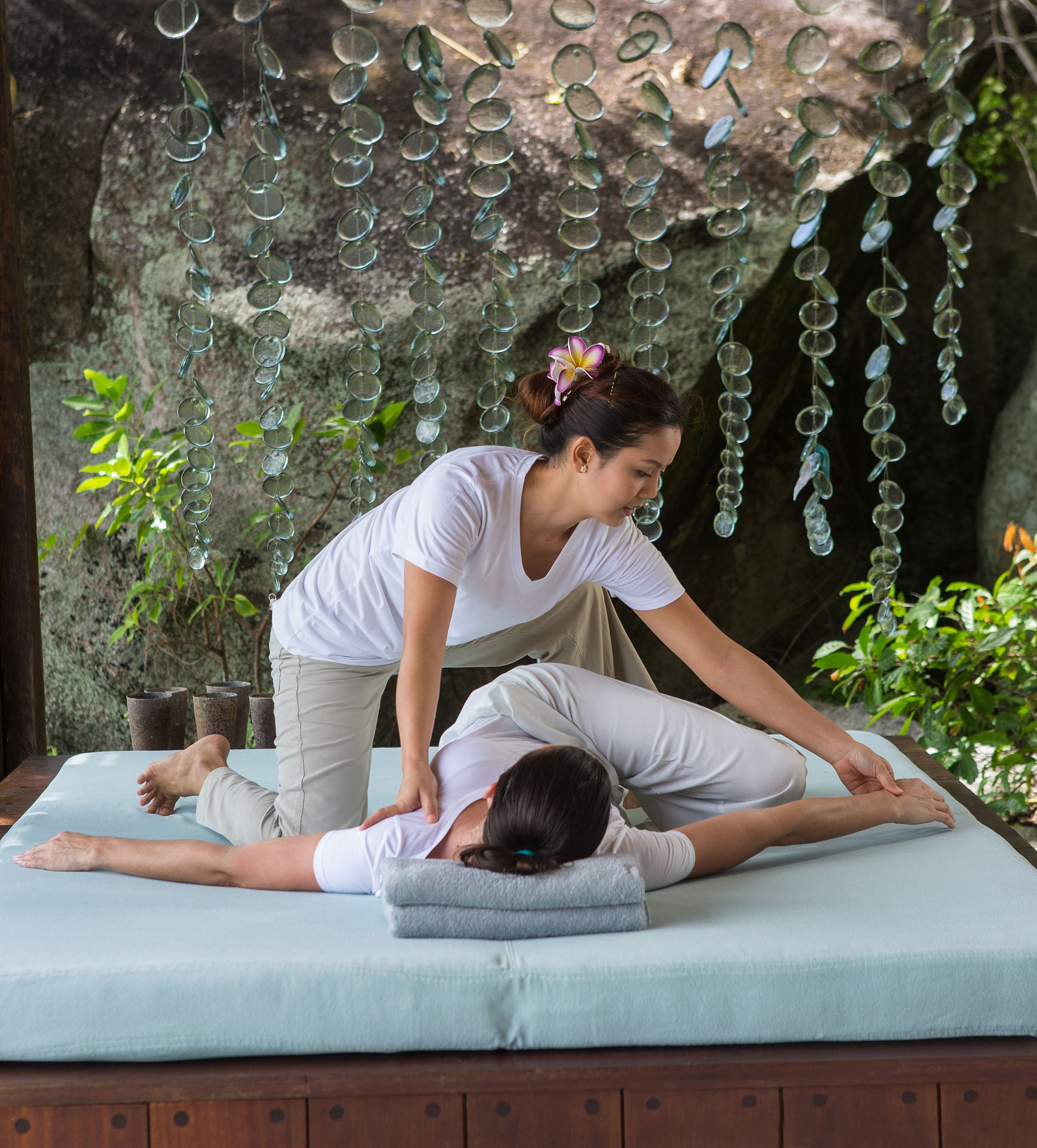 There is a four to seven night minimum, depending on dates of stay. Rates begin at $6,000 per night. north-island.com