FROM SLEEPLESS SEASIDE FESTIVALS TO WORLD RECORDBREAKING LIGHT SHOWS, THESE LAVISH NYE BASHES FROM AROUND THE WORLD DIAL UP THE DAZZLE EACH YEAR, WITH THRILLS APLENTY WHEN THE CLOCK STRIKES MIDNIGHT

RIO DE JANEIRO
Each year, three million people tourists and Cariocas (Rio natives) alike descend upon this seaside mega-city for Reveillon, Rio de Janeiro’s second largest festival behind Carnaval. The legendary Copacabana Beach swells with people early in the day, and by nightfall, millions are dancing barefoot on the sand, counting down to midnight. The traditional garb is stark white with accessories in red (for romance), green (for good health), and gold (for prosperity). Take part in the local tradition of throwing flowers into the ocean to honor Lemanja, the goddess of the sea, a ritual believed to bring a year of good fortune. No matter your ensemble, be sure not to wear black, as Brazilian tradition considers noir attire a bad omen for the New Year. 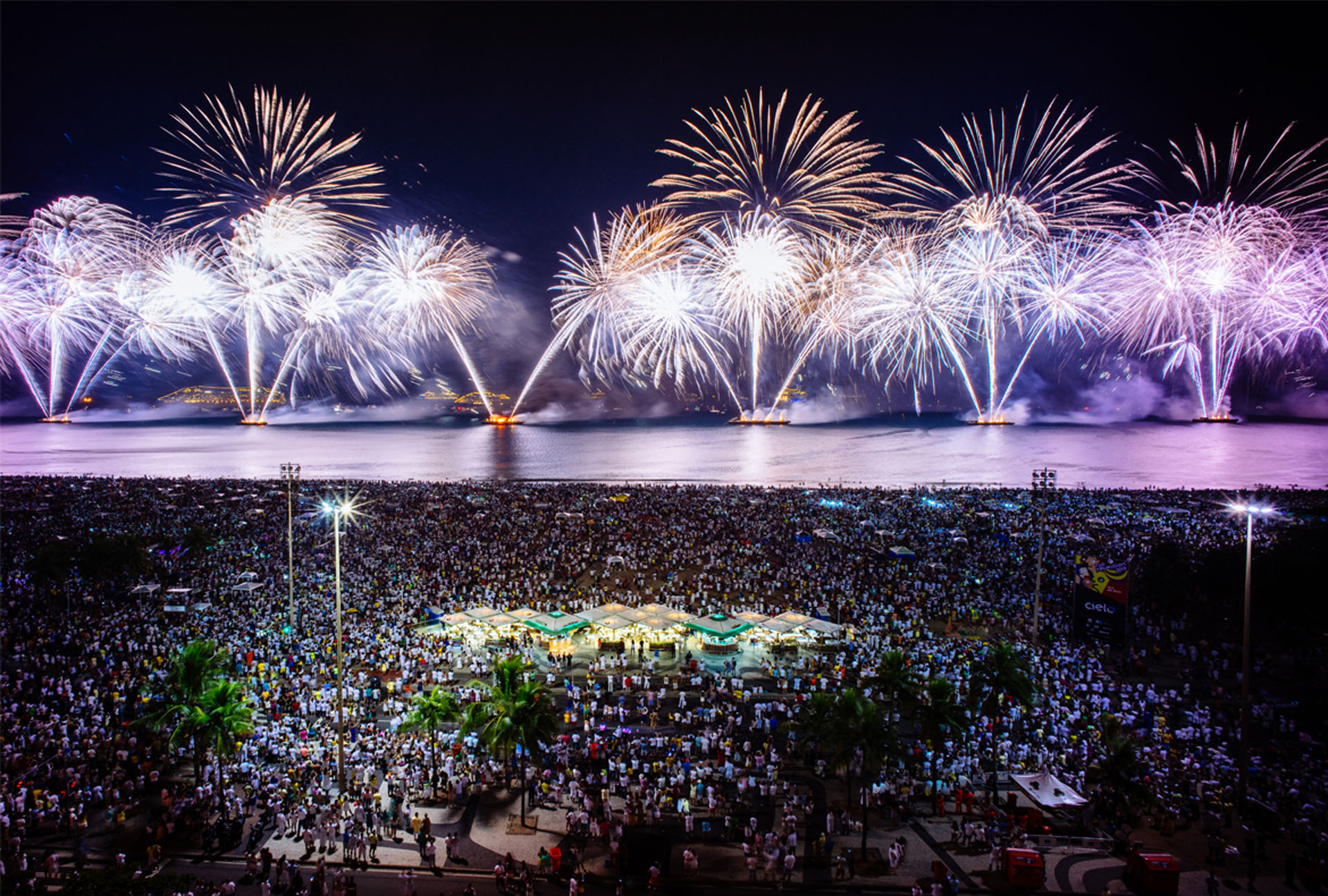 Dozens of beachfront restaurants offer a special prix-fixe menu for the occasion, and many sell tickets to their private terraces to watch the fireworks from the sanctuary of a table. But for those craving the action, the beach is pulsating with energy, filled with revelers young and old. At midnight, 25 thousand tons of pyrotechnic products culminate in an epic light and fireworks show.

WHERE TO STAY: Belmond Copacabana Palace, a five-star Art Deco resort and Rio icon since its founding in 1923, is located mere steps from the action. If the beachside crowds prove to be too much, watch the lights from one of the 243 guestrooms and suites, boasting large French doors that open to private terraces overlooking the sea. The rooms are filled with sumptuous dressings like rich mahogany furniture, pink Brazilian marble bathrooms, and Oriental carpets. In addition to a pair of high-end restaurants (one with a Michelin star), guests can also choose to feast and clink glasses in one of three party rooms. Four-night packages for two begin around $3,800. belmond.com 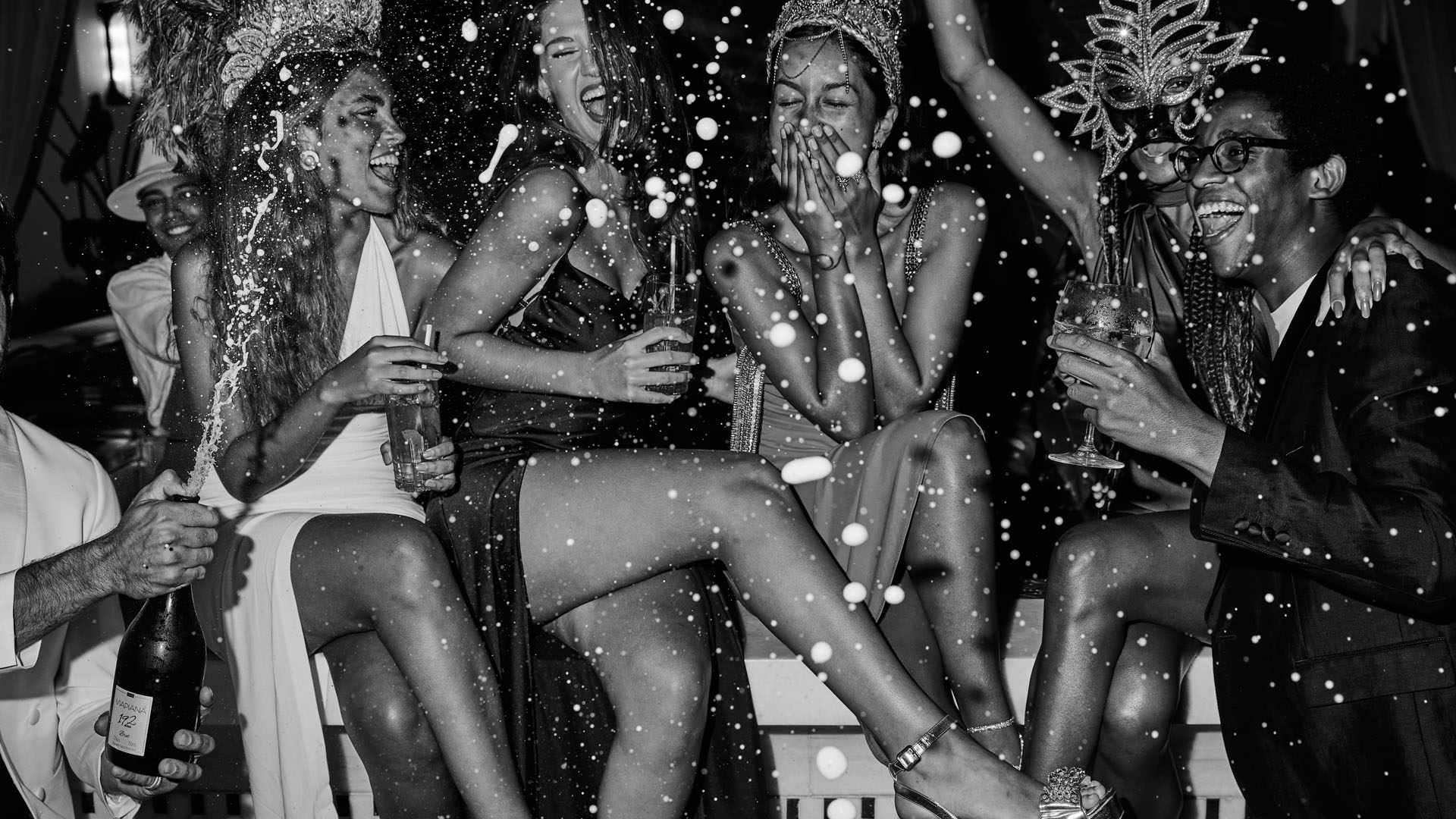 PARIS
The glamour capital of the world does indeed take New Year’s Eve with a grain of silk, hosting several top-end celebrations throughout the metropolis, from lavish dinner parties at Michelin-starred locales to high-class cocktail cruises along the Seine. But one of the most beloved Parisian NYE traditions is the lauded street party, toasting cups of champagne and howling bonne année! at midnight. The manicured gardens of the Champ de Mars that surround the Eiffel Tower swell with sojourners every NYE, dancing in the park as the iconic structure shimmers and sparkles during its hourly light show. 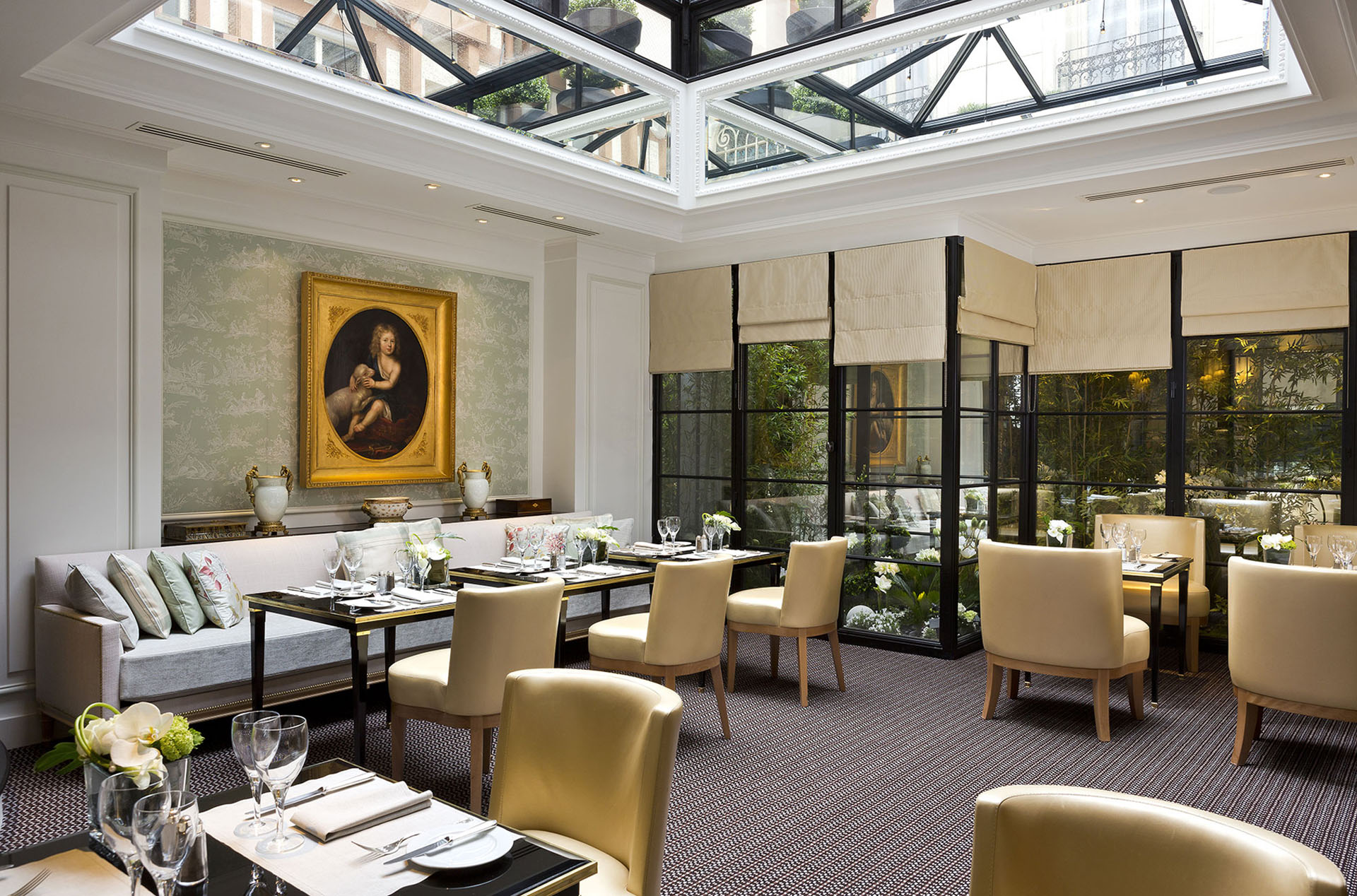 But the official street party takes place on Paris’ most famous avenue, the Champs-Élysées, which begins to fill early in the night as revelers find their spot to watch the famed light and fireworks show on the Arc de Triomphe. This year, a DJ set and video animations will begin at 9 p.m. The countdown will then commence at 11:45 p.m., with a commemorative video projected onto the Arc, and finally culminating at midnight with a massive fireworks display. After the show, keep the party going at Le Duplex, an iconic Parisian nightclub nearby.

WHERE TO STAY: Propitiously located in the heart of the golden triangle, between the avenues Montaigne, George V, and Champs-Elysées, the San Régis is a stunning historic mansion house comprised of only 42 guestrooms and suites. Take part in the invigorating energy of the Champs-Élysées celebration before retreating to your stunning vintage quarters, filled with porcelains, vintage engravings, and original artworks evoking the prestige and glamour of 19th century Paris. Rooms on NYE begin at $566. hotel-sanregis.fr 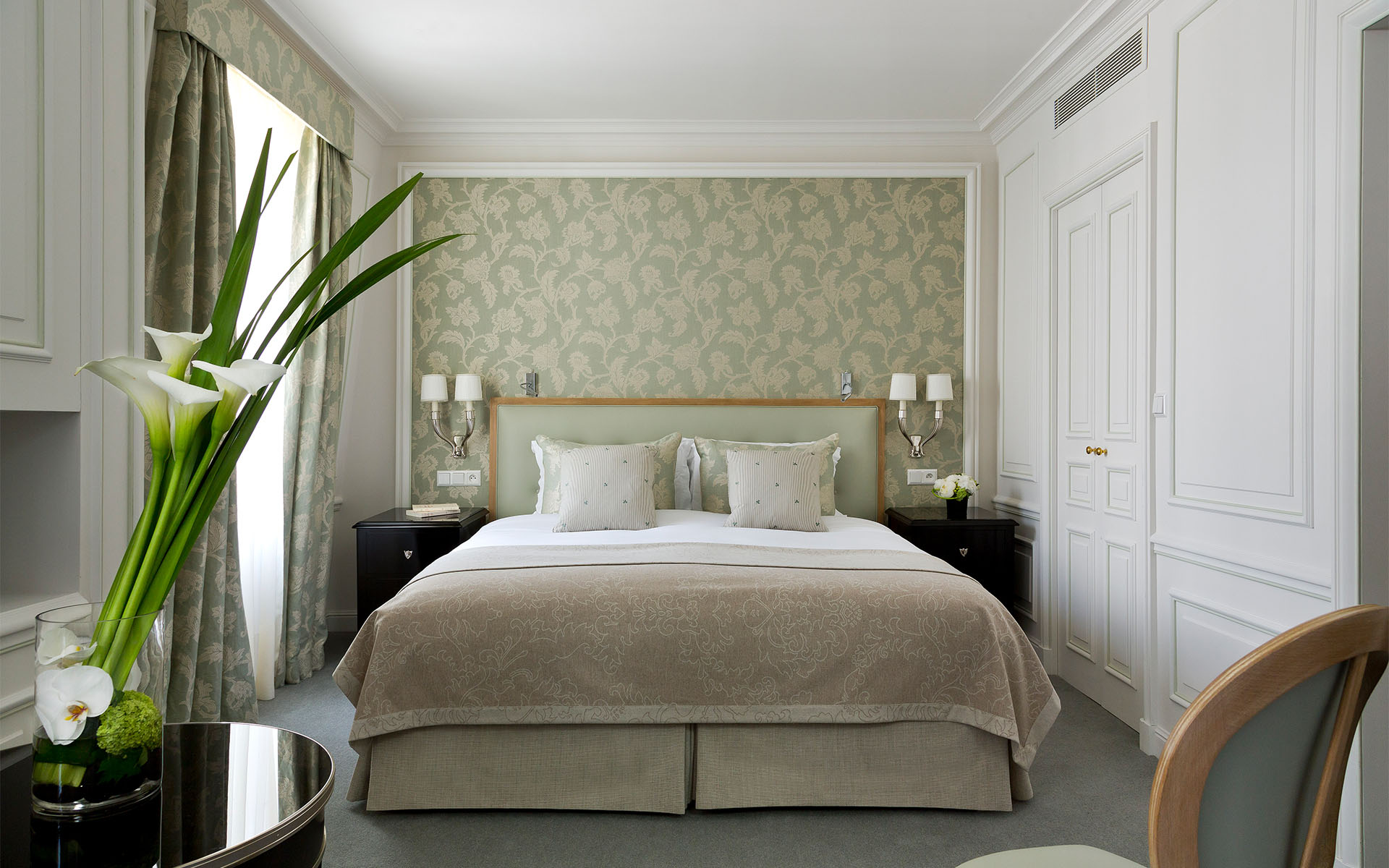 SYDNEY
One of the first major world cities to ring in the New Year, Australia’s largest city goes big for NYE, hosting one of the globe’s most epic reworks displays. For 12 minutes at midnight, 30,000 pyrotechnic lights soar through the night sky along a 3.5-mile expanse above Sydney Harbor. The waters also come to life with the late-night Harbor of Life parade, a line-up of yachts all dressed head-to-toe in gleaming lights. 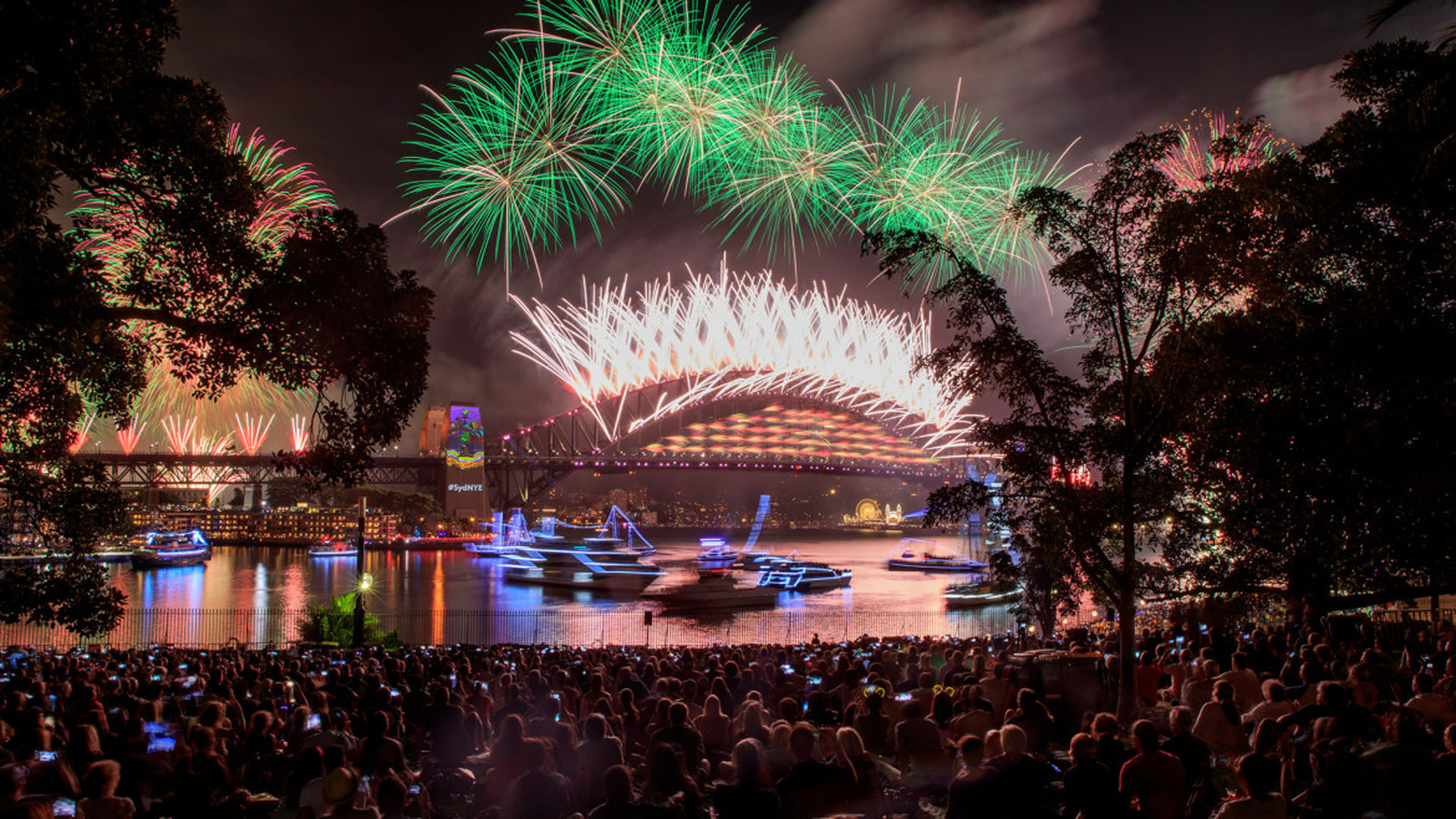 One of the closest locations and best seats in the house to watch the show is the Royal Botanical Gardens, a heritage listed 75-acre botanical park. The gardens host several events across all budgets, but one of the most exclusive is the small group garden party at the Calyx, located in the heart of the grounds. The extravaganza features free owing top shelf drinks along with chef-curated canapes and live music. As midnight approaches, attendees will be escorted on a night-time walk to a private harborside viewing area to watch the show with a glass of bubbles. Tickets are $595.

WHERE TO STAY: Situated in Sydney’s Central Business District directly adjacent to The Rocks district and Circular Quay, the Four Seasons offers prime location and five-star accommodations for an NYE experience that pampers with luxurious abandon. NYE packages range from three to 14 nights, and include a stay in a Deluxe City Room, daily breakfast for two, and a pair of tickets to watch the midnight reworks at First Fleet Park in Circular Quay. For a more private showing, guests can upgrade to one of six suite types that offer full views of the reworks. Three night stays begin at $2,650. fourseasons.com 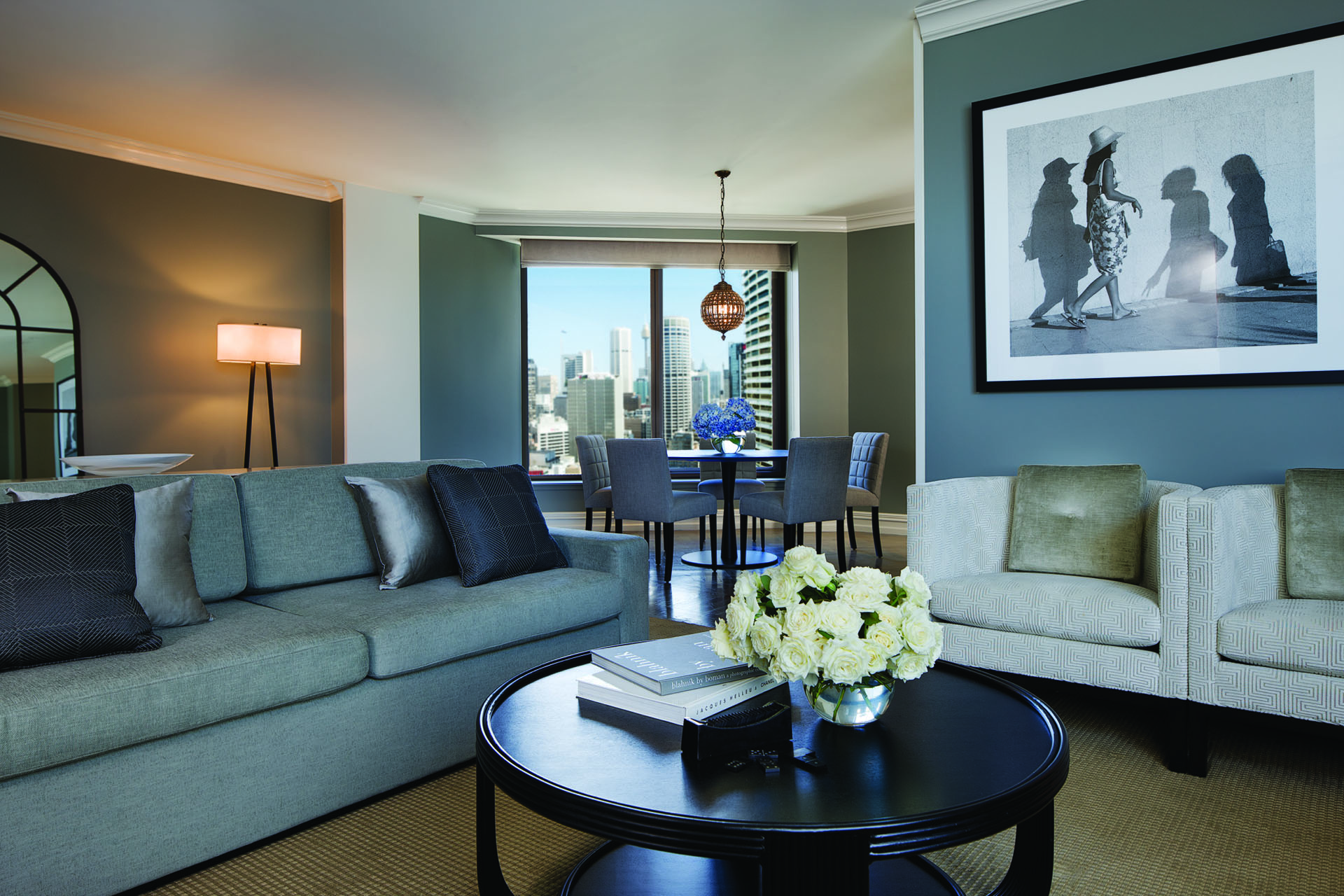 LONDON
For the first time since 2019, London’s larger-than-life NYE celebration along the banks of the river Thames are back, ready to make up for lost time with a menu of spectacular festivities. The ticketed event features the largest reworks and light show in the U.K., set against the backdrop of the towering London Eye, a 443-foot ferris wheel. Only 103,000 tickets will be sold (in years prior, half a million would congregate near the river banks) to prevent overcrowding, but if you’re not able to snag a ticket, the festivities will be televised on big screens in Trafalgar and Parliament Squares. 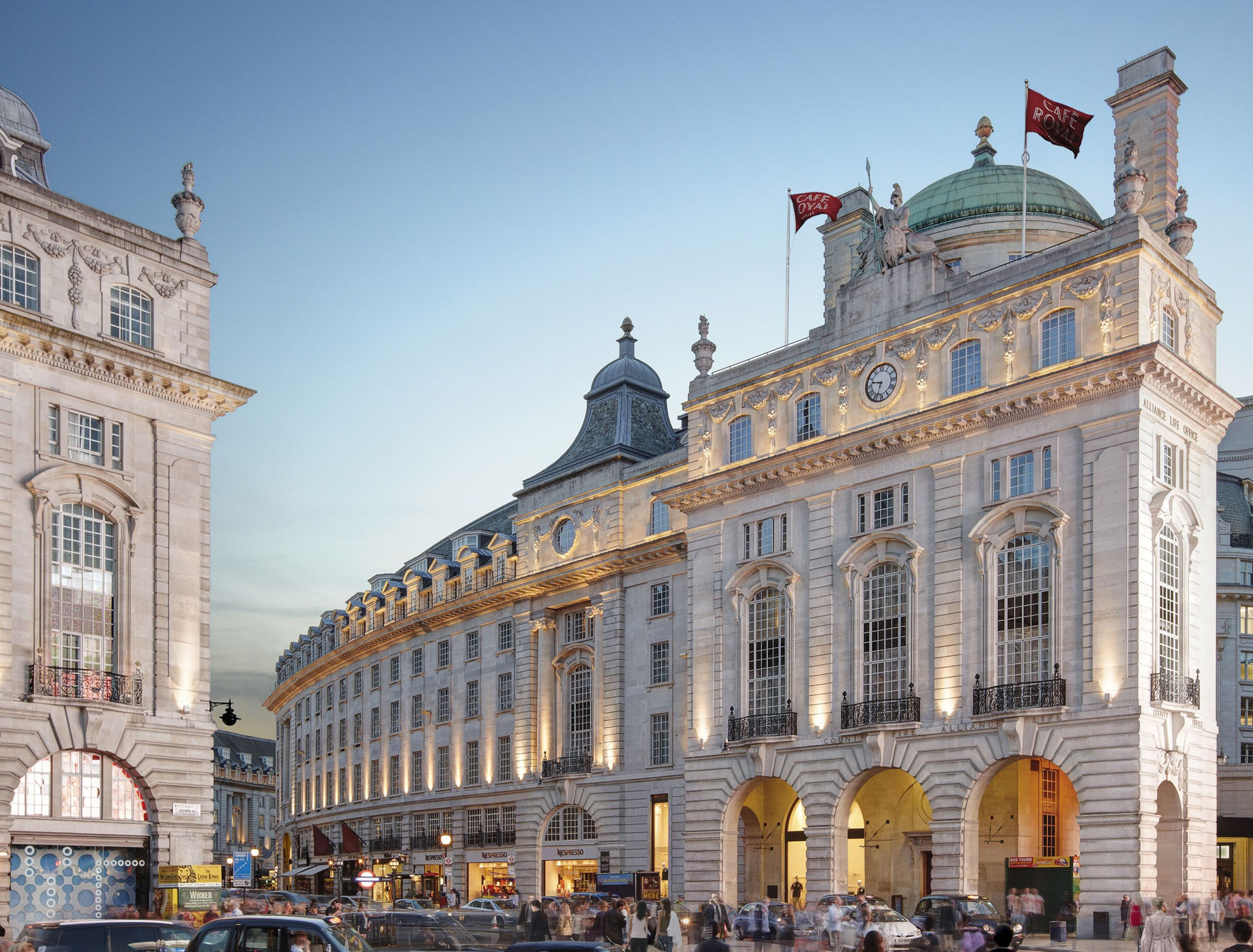 Another way to take part in the visual feast is on a Thames river cruise aboard the Silver Sturgeon, featuring an ultra luxe itinerary that includes a three-course dinner by celebrity chef Adam Thomason. The 200-foot yacht sails past iconic landmarks like the illuminated London Bridge and Big Ben, before mooring by Tower Bridge for a midnight toast with Charles Heidsieck champagne as the fireworks pop and sparkle in the distance. Tickets begin at $500.

WHERE TO STAY: One of London’s most celebrated nameplates, the 150-year-old Hotel Cafe Royal in the West End blends timeless sophistication with contemporary luxuries. Think paneled walls, sparkling marble bathrooms, and rich red seating juxtaposed by Sienna marble tables. The restaurants all five of them are works of art themselves, dressed in photo-worthy details like frescoed ceilings, absinthe green walls, and freshly cut flowers. The hotel offers exceptional views of the fireworks show; book a signature suite on a higher floor with a private terrace for the best seat in the city. Rooms begin at $1,400 per night with a two-night minimum for New Year’s Eve. hotelcaferoyal.com 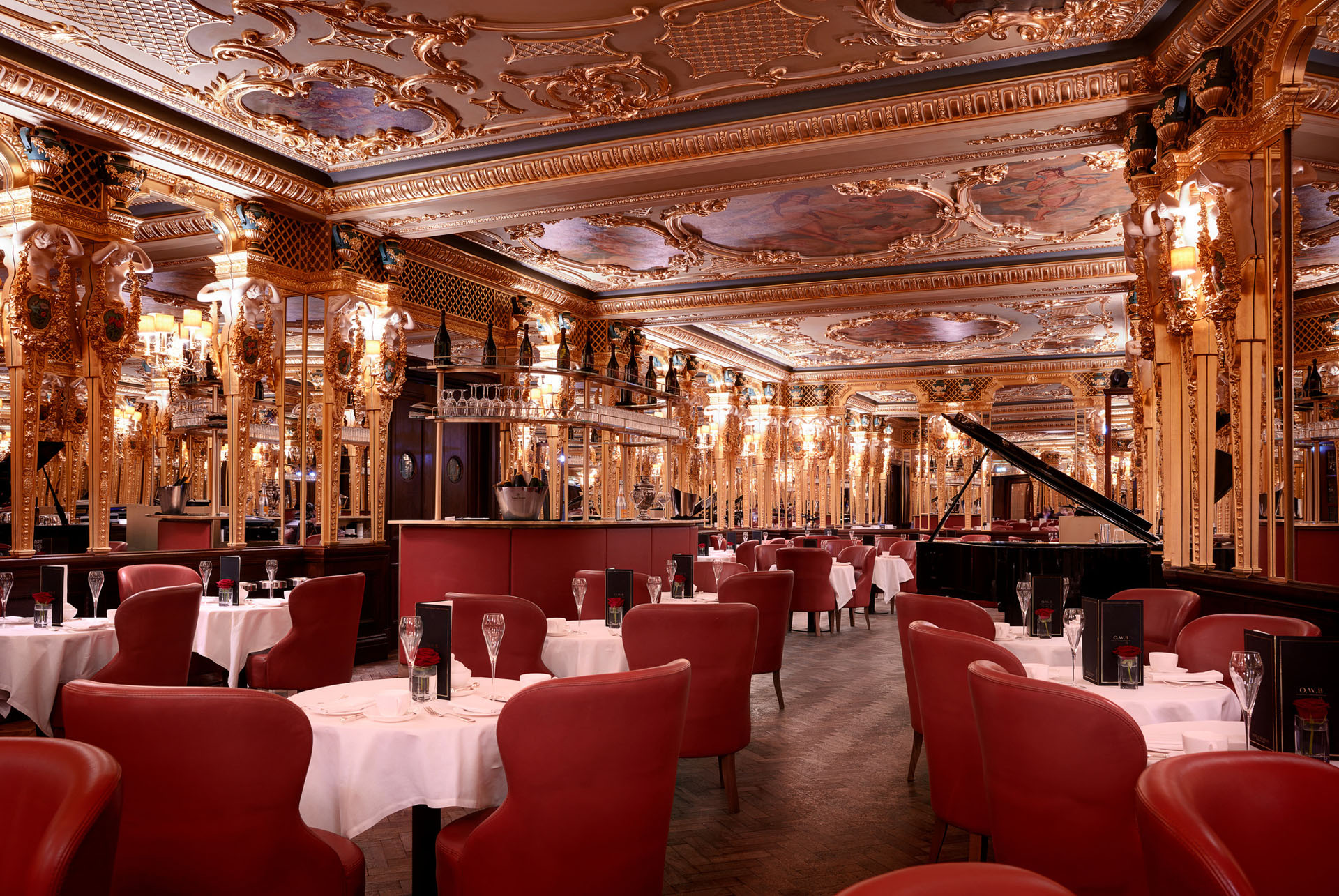 DUBAI
The glittering City of Gold in the United Arab Emirates (unsurprisingly) dials up the extravagance for New Year’s Eve, hosting several Cristal filled events across the metropolis. is year, the city fill host 36 total fireworks displays across 29 locales, including the main course: the world’s largest fireworks display at fittingly the planet’s tallest skyscraper, the Burj Khalifa. Dubbed the Eve of Wonders, the spectacular show even nabbed a Guinness World Record in 2019 for the largest LED-illuminated façade. The 163 story mega-tower is engulfed in a rainbow of pyrotechnic flares, all synchronized to music, and the show lasts for approximately 20 minutes. 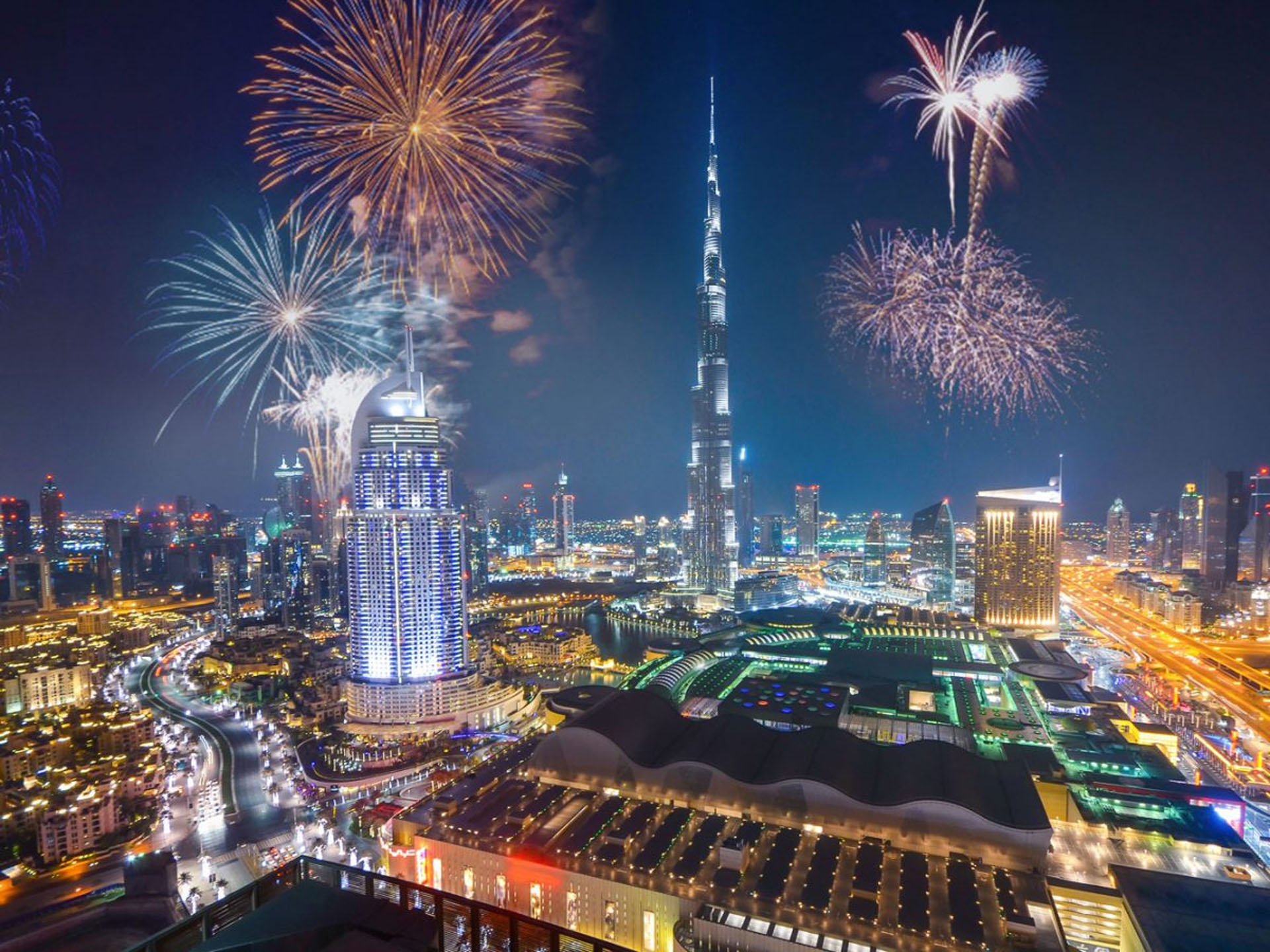 There are several places to peep the show, including Burj Khalifa’s observatory deck, the nearby Jumeirah Emirates Towers, and the buzzing bazaar Souk Al Bahar, as well as numerous high-end restaurants in downtown Dubai. Or, if you prefer to take in the sights over water, the Queen Elizabeth 2, an historic cruise liner turned upscale floating resort, hosts a formal gala dinner each NYE, featuring a Michelin-caliber seven-course meal plus cocktails with exceptional views of the midnight action.

WHERE TO STAY: ME Dubai is famed for its ultra-lavish New Year’s Eve packages, which in years past have included a pair of Lamborghinis, a yacht experience, and a Jacob & Co. Bugatti Chiron Tourbillon wristwatch, but for those with a budget less than $10 million, Atlantis The Palm is perennially one of the hottest hotels in the city for New Year revelry. There are several 2022 packages to choose from for the occasion, including a dinner gala featuring singer Kylie Minogue with a 30-piece live band. The party also includes live cooking stations, unlimited premium cocktails, and free flowing champagne, all leading up to exceptional views of the midnight fireworks. The gala is $1,606 per adult, with rooms beginning around $1,000 per night. atlantis.com/dubai 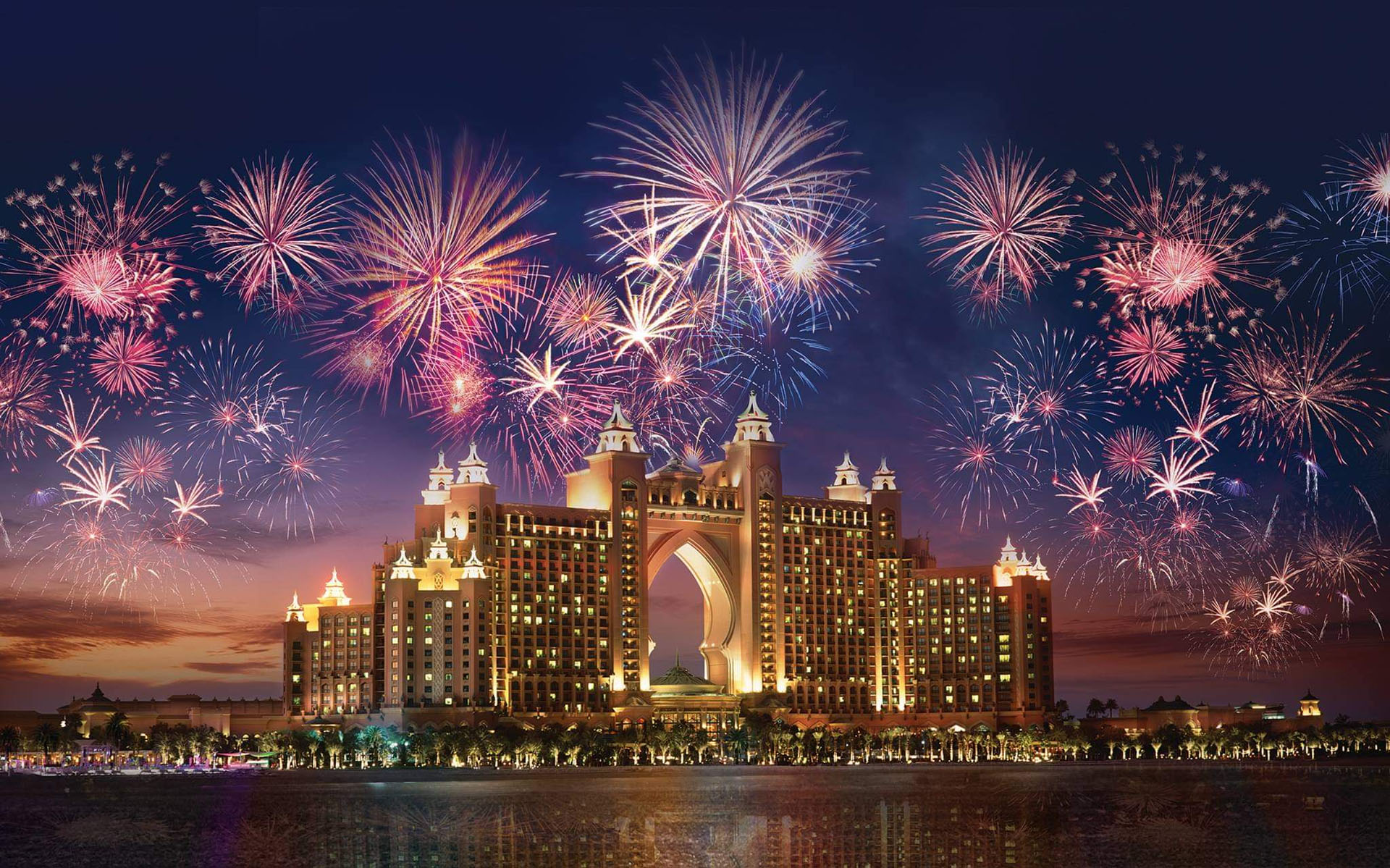