When longtime clients approached New York City designer David Scott with the challenge of updating the 40-year-old spec house that sat on their property in Shinnecock Bay, Southampton, a collaboration sprang naturally to mind. For Scott, an interior designer with 27 years of experience, working with another creative professional “is something that’s frequent in my practice,” he said. “Very often I’m working with an incredible architect for a client—we make each other better through working together and I never feel that there’s a struggle.” Scott’s clients, with whom he’s worked on six projects over twenty years, came to him with the inspiration to remodel the existing home into a traditional shingle-style beachfront residence. 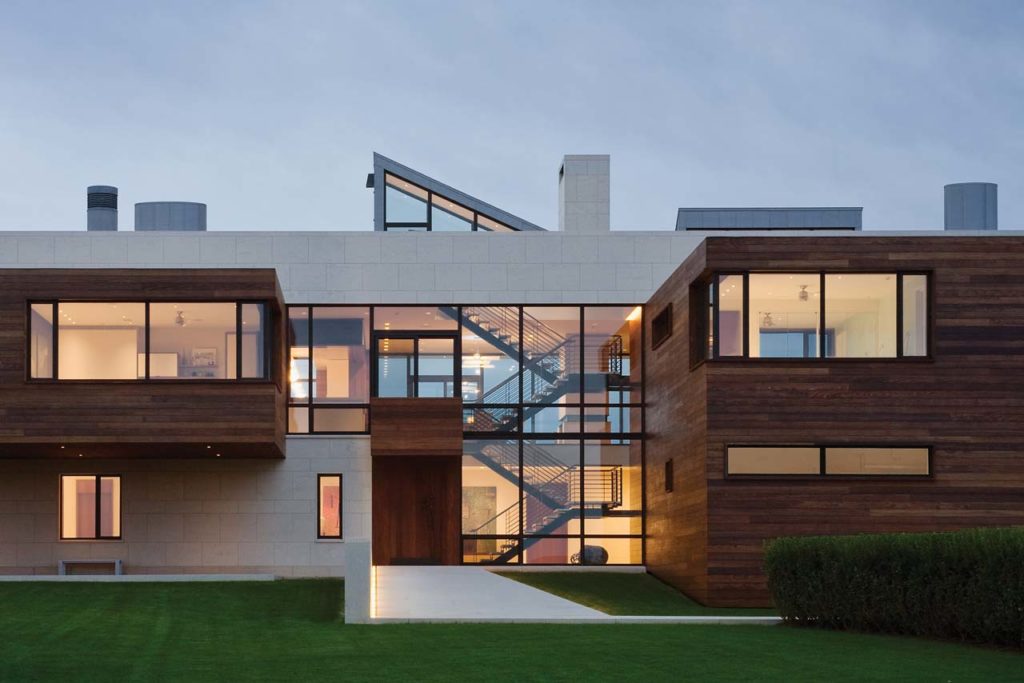 “I have a close relationship with these clients; I’ve worked on all of their homes,” he said, so when Scott suggested that they bring architect Alexander Gorlin into the discussion of what to do with the property, they readily agreed.

“He was the first person I thought of to collaborate on this house,” said Scott, who had firsthand knowledge of Gorlin’s design after owning a residence in The Gorlin, a midrise tower in Aqua Ellison Island, Miami, designed by Gorlin himself. “He [Gorlin] was my next door neighbor, along with Paige Rense [former Architectural Digest editor]—just the three of us on the floor.”

While it wasn’t until the Southampton collaboration that Scott and Gorlin became close, the former said, “when the opportunity came to work together, I introduced him to the clients right away.”

“It was a wonderful mitzvah that he did,” said Gorlin of the introduction. “I became good friends with David and with the clients as well.”

What followed was a nearly three-year process from design to completion that saw Scott and Gorlin work intimately together and with the clients on elements of a unique, “upside-down” concept for the new seaside residence, incorporating a striking contemporary design that appears to rest weightlessly on the site with two remarkable facades. One facade is cantilevered and facing away from the sea, the other overlooking the Atlantic and bearing a zinc sunscreen that runs the length of the building. 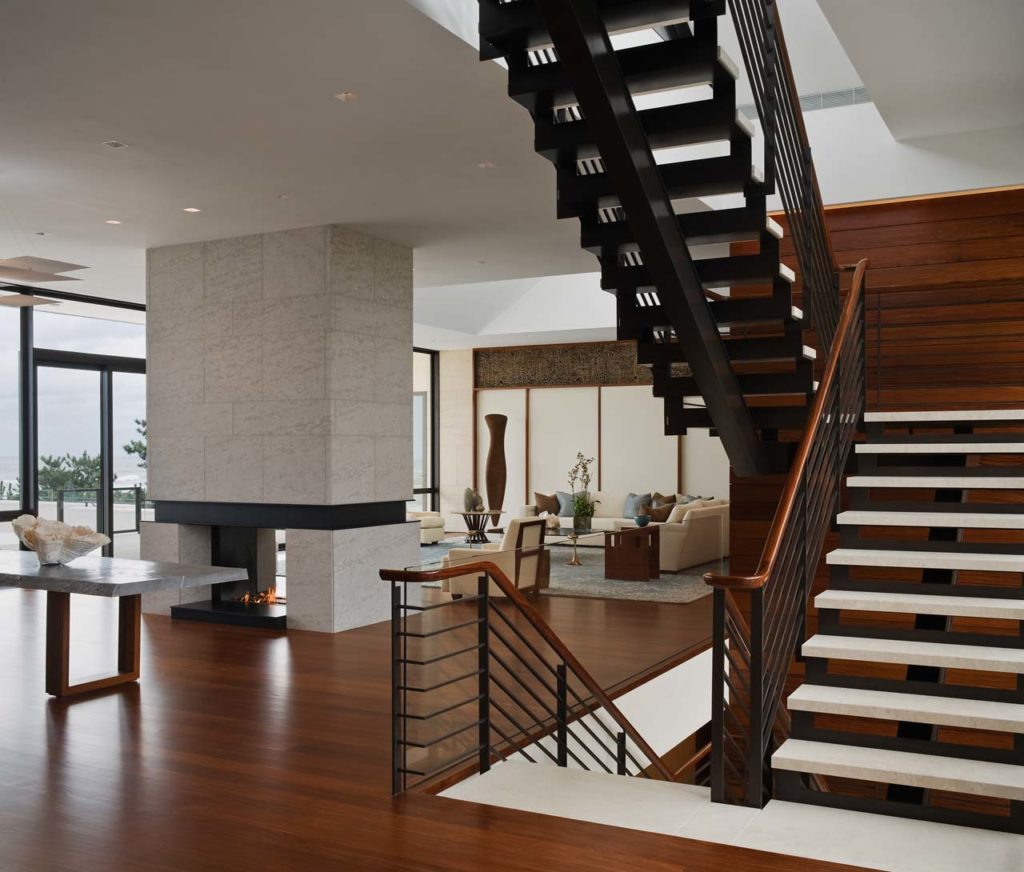 The home’s entrance is a two level gallery whose switchback-style
staircase splits the main floor, and draws guests instantly upward
toward the second level and the rooftop terrace (Gorlin’s favorite part of the residence).

“The site is very restricted in terms of height because of the
dunes,” said the architect, “so the only way you can have views is from one of two floors. We chose to have all the bedrooms on the second floor. The master bedroom and the living room, kitchen, and dining room face the ocean, and the [children’s] rooms face the bay.”

The site inspired Gorlin to design a home, he said, that pays homage to the dual-facing Roman deity Janus, a symbol of, among other things, beginnings. “The wonderful thing about this site is that it has beautiful views of both the ocean and the bay. We have a full terrace on the roof, where you really feel like you’re on a ship—where you don’t see anything but ocean and bay.”

The proposed design was embraced by the clients and, according to Scott, experienced little variation from concept to finish. “Alex designed a very sculptural house, after listening to the clients’ programming and desires, and came up with a beautiful model that stayed fairly true to what the house became,” he said. “I became involved in the material selections with the client and with Alex, and how we would treat the house became more organic, more connected to the earth and the sky and the sea.” 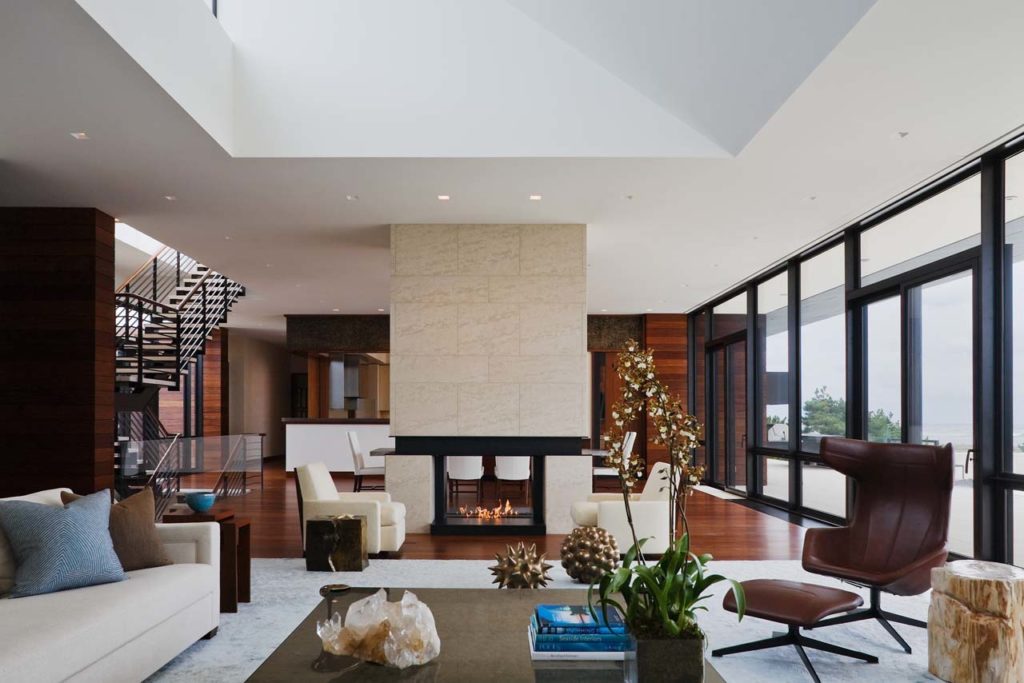 Gorlin seconds that Scott’s collaboration helped texturize the home’s design. “David is a master of material,” he said. “He suggested the wood for the outside of the house; he was instrumental in keeping things warm and humane.”

Bespoke details abound in the residence, such as the afromasia timbers that extend from the exterior into living spaces (such as the master bath) and a live-edge aluminum dining table by John Houshmand, a New York furniture maker, cast from a 12-foot slab of white oak. “You don’t see a lot of live-edge tables cast like a sculpture. It automatically looks organic, even though it’s metal,” said Scott.

A powder room without natural light was given relation to the home’s exterior by French artist and textile designer Sophie Mallebranche; in place of a window, a metal woven textile extends to the floor in a curtain. “That enlivens that wall when you first walk in.” Scott explained. “It’s made of aluminum, copper, and fishing wire, and hand-applied beach glass and shells that mysteriously cascade into a trough of beach glass on the floor. It’s lit from above and creates its own view, in a way.”

Gorlin’s architecture incorporates bespoke artwork as well. “There was a danger in this house that we’d have two forty-foot-long air conditioning grilles that would have looked like an airport lounge,” he said. So, artist and author Michele Oka Doner, whose Miami International Airport floor incorporates sea creatures floating on a terrazzo ground, was asked by Gorlin to adapt one of her patterns to camouflage the system with a custom grille. She agreed, and the result is a bronze trompe l’oeil that runs the length of the residence, adding texture and warmth to the surrounding design’s minimalism. 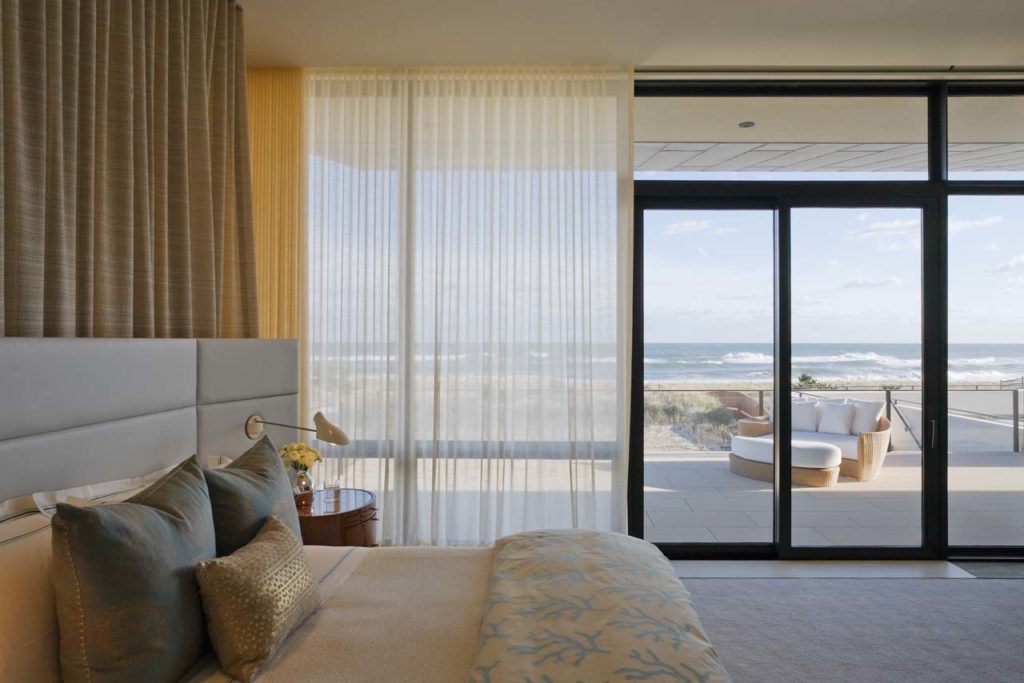 Scott also praises Oka Doner’s work in the design. “She’s one of the great bronze artists living,” said Gorlin. “We also commissioned her to do the front door handle, that was made from found driftwood objects.” All of which, naturally, leads to the view from the rooftop terrace, the culmination of three years’ work.

“All you see is water,” he added. “It’s commanding.” Scott agreed, “That’s a really cool thing. 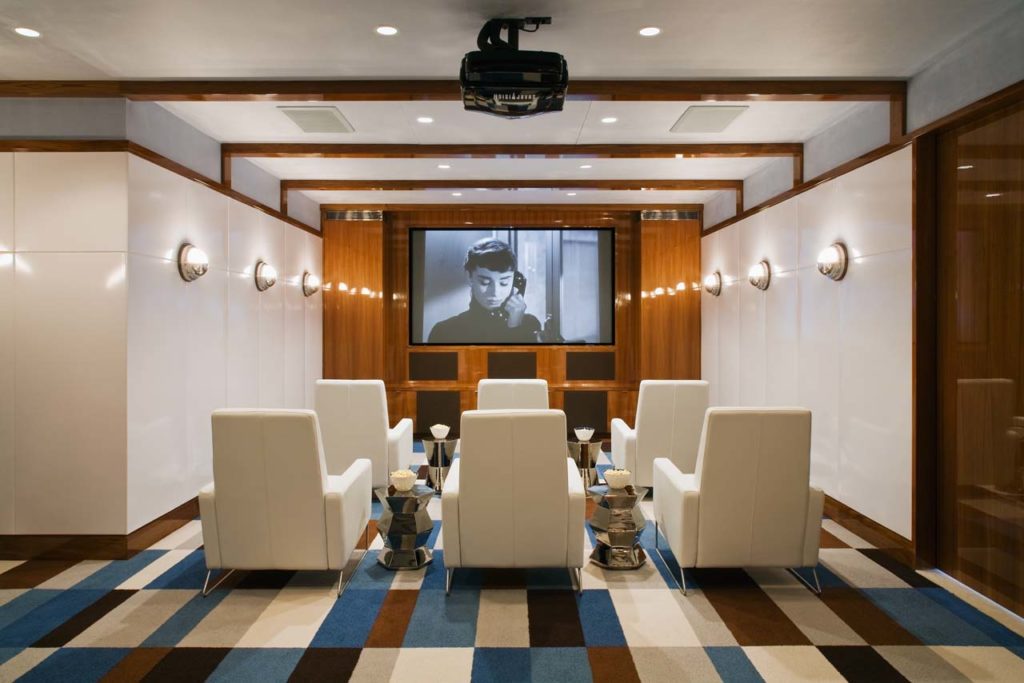