When European settlers first encountered modern day Brooklyn’s northernmost neighborhood, they christened the verdant enclave, marked by thickets of trees along the East River, Greenpoint. Up until the 19th century, the area was a sleepy hideaway of farms inhabited by only a handful of families, but by the 1830s, a wave of industry had moved in, spanning everything from ship building and rope manufacturing to sugar and oil refining. Large warehouses dotted Greenpoint’s industrial skyline along the waterfront (many have since been converted into modern day art studios or galleries) and the population surged. In 1906, the original Greenpoint Library opened, and that same year the Greenpoint Savings Bank settled into a newly erected neoclassical edifice Walong Manhattan Avenue that would go on to become one of the neighborhood’s most prized landmarks. 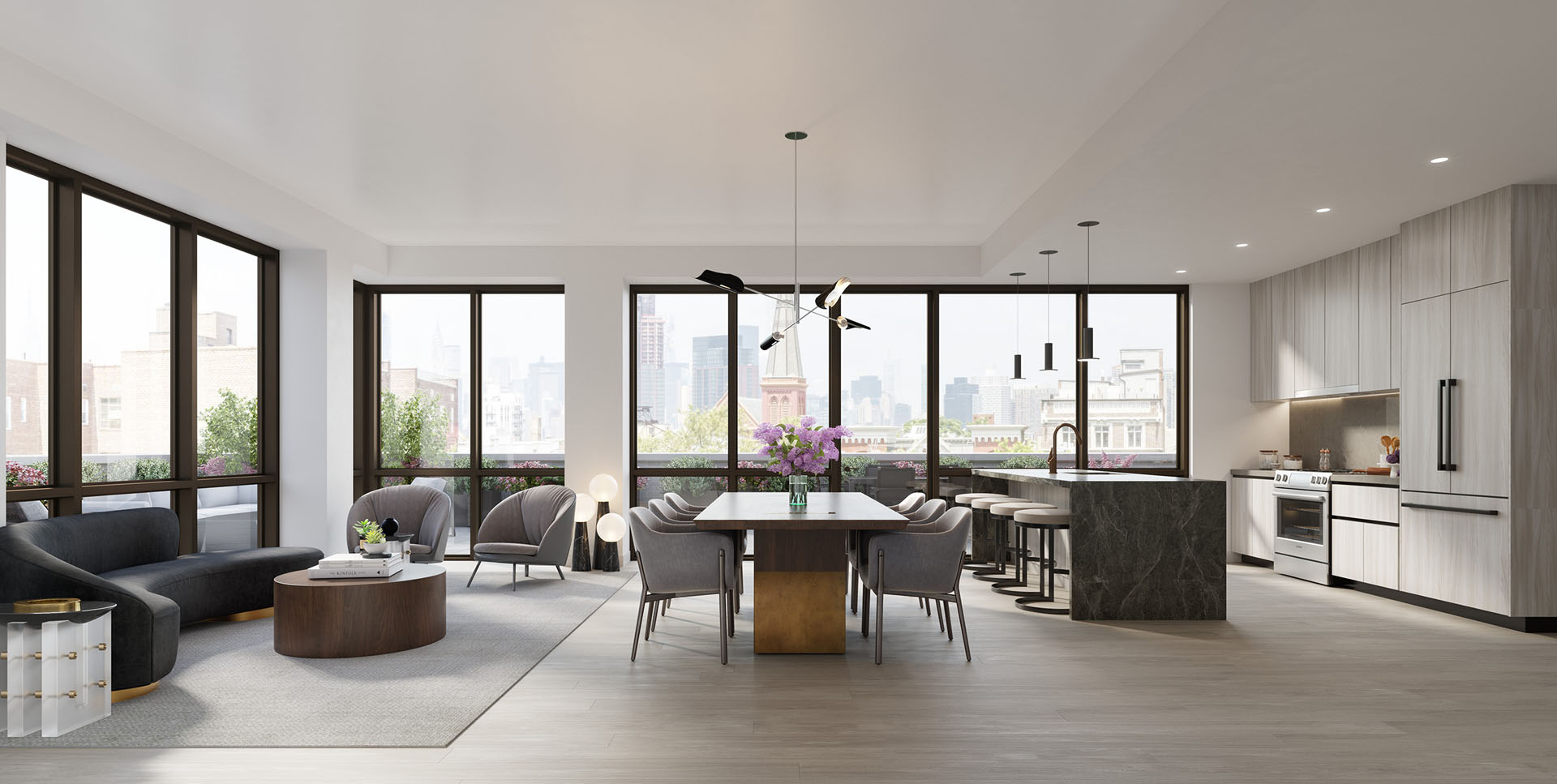 Over a century later, the bank is no longer in operation, but its legend lives on through 1080 Lorimer, a restored 29 residence luxury condominium tucked in the building’s annex (circa 1953). The Slate Property Group developed conversion officially announced sales in June, led by NYC real estate brokerage MNS.

PKSB, the architecture firm behind several of the city’s most fascinating preservation projects, led the redesign, which included a total replacement of the residential building’s facade.

The architects chose a warm silver grey brick to honor the bank’s neoclassical limestone facade. The famed fish scaled shingled dome still stands, and a resident lounge and leafy outdoor courtyard offer a front row seat to its grandeur. A state of the art fitness center is also on site. 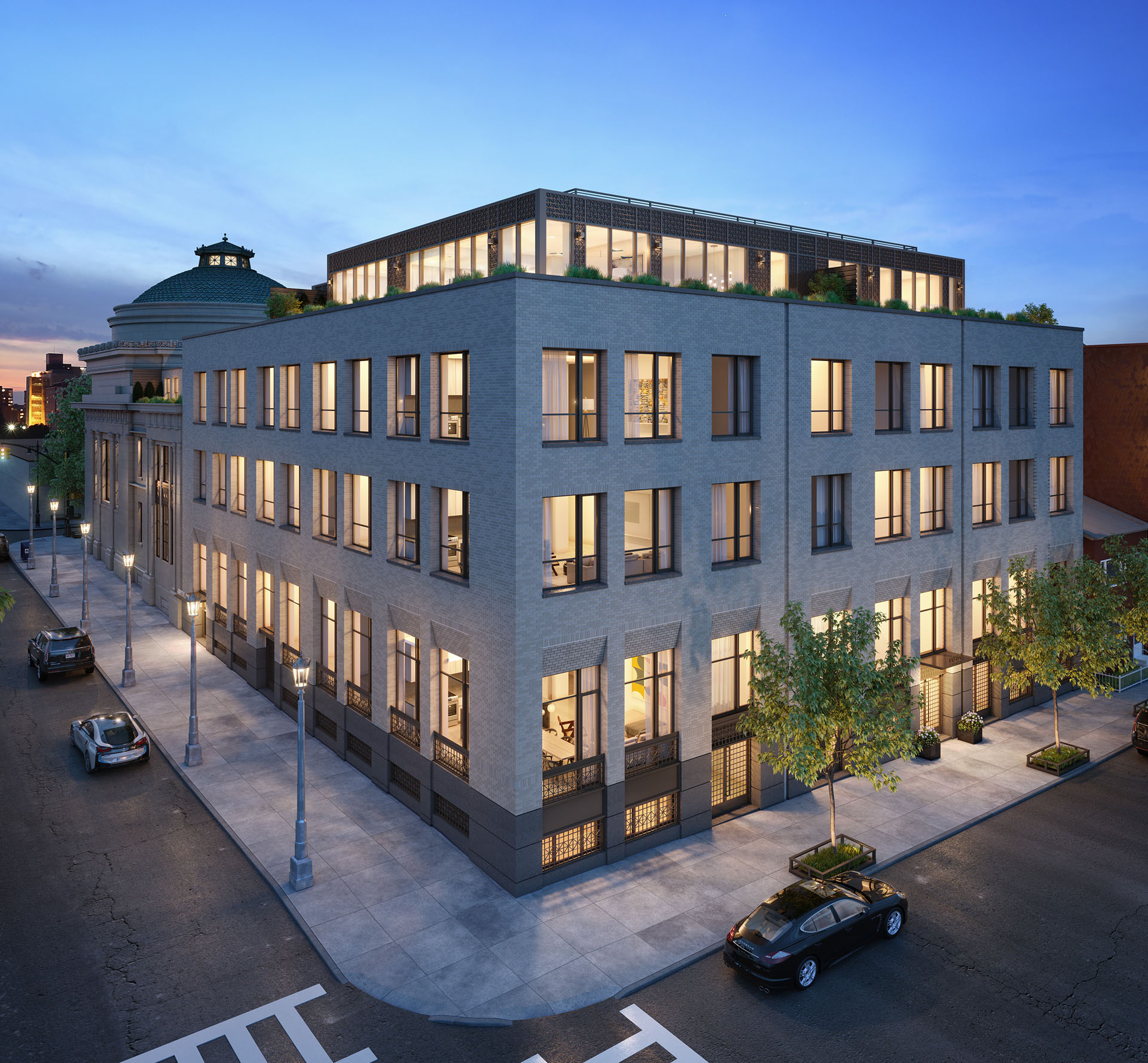 “The Greenpoint Savings Bank is perhaps the most distinctive building in the Greenpoint Historic District,” noted Tamar Krasnow, vice president of new development with MNS. “The design for the residential conversion and expansion honors the historic building’s decorative features while maintaining the simplicity of the 1950s addition.”

The 29 residences are divided into duplexes and one to three bedroom homes, including two and three bedroom penthouses with expansive open air terraces. Greenpoint’s prime position along the East River affords sublime Manhattan skyline views, and the homes are sure to take advantage with oversized casement windows, some overlooking world famous landmarks like the Chrysler and Empire State buildings in the distance. The windows are double paned and thermally broken to seamlessly weather the bustle and climate of the city’s most populous borough. 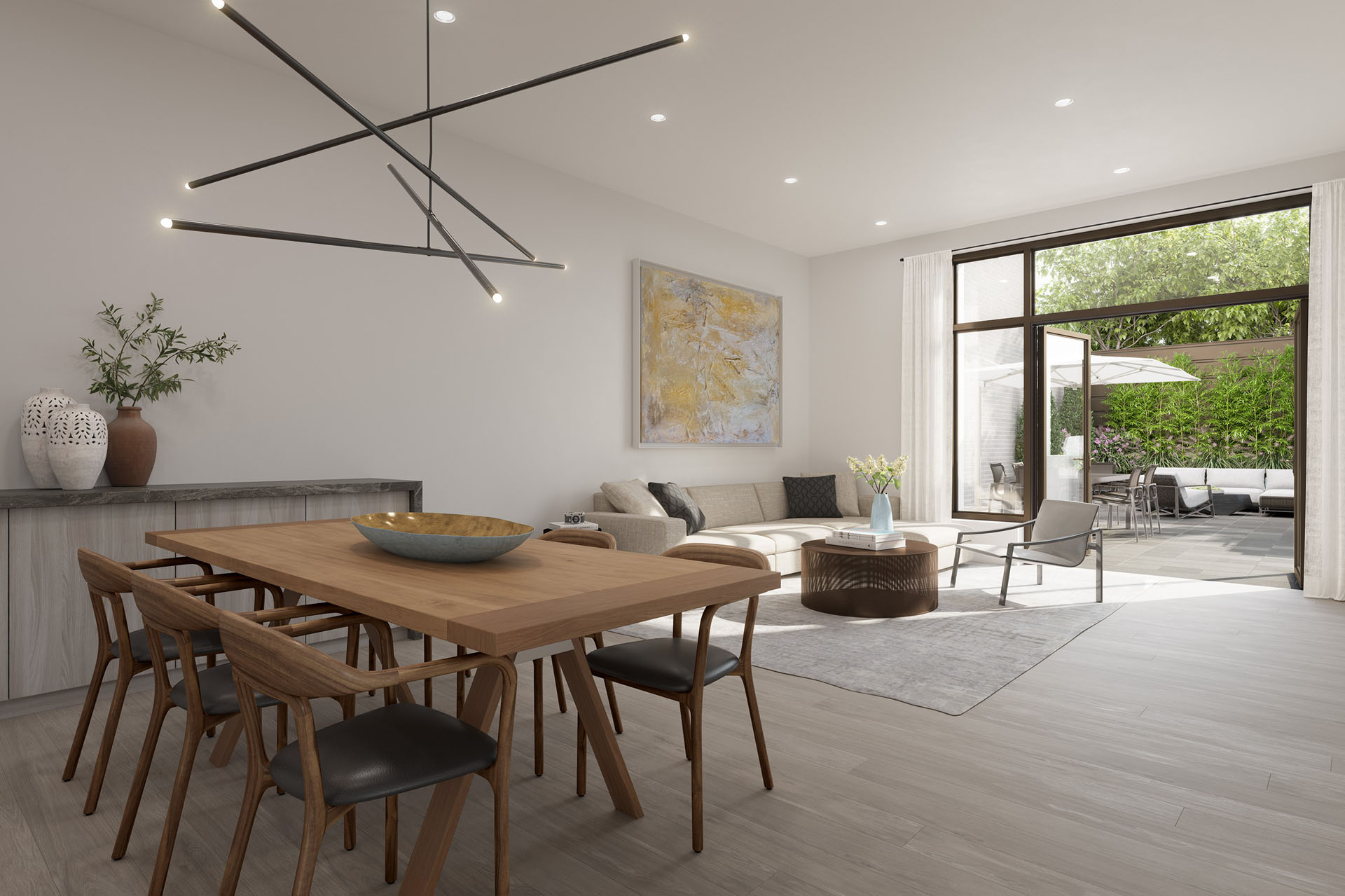 The four rooftop penthouses are outfitted with floor to ceiling windows with views of the bank dome and nearby Long Island City, plus a sweeping panorama of the Manhattan cityscape. The garden shrouded terraces are equipped with private BBQ grills and ample space for dining, lounging, and clinking glasses against an exquisite metropolitan backdrop. The penthouses even allow their denizens to bathe amid city views with indoor outdoor showers.

Inside the homes, a sleek, neutral color palette complements the clean, open design, marked by straight lines and dusted with modern black accents. PABLO lighting fixtures in contemporary geometric shapes hang from the high ceilings, illuminating plush five inch European white oak flooring. “We wanted to be sure to create spaces that are elegant and timeless a home that will never go out of style and also speaks to the nature of the conversion,” said Krasnow. 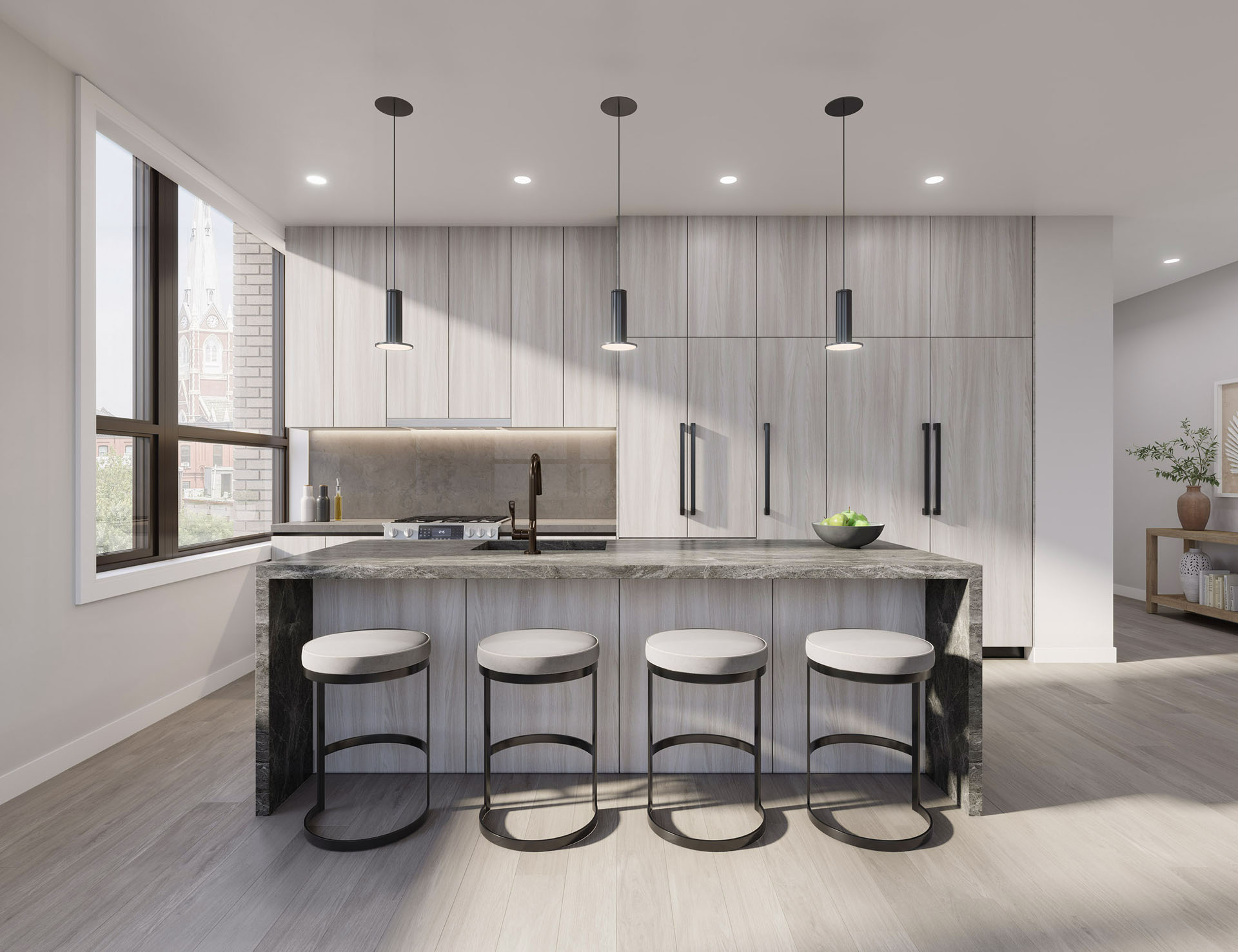 Soft colors with strategic pops of black also fill the bathrooms. The primary bath features large format porcelain and ceramic tile with chevron tile accents on the wall. A custom floating wooden vanity houses his and her Kraus washbasins. 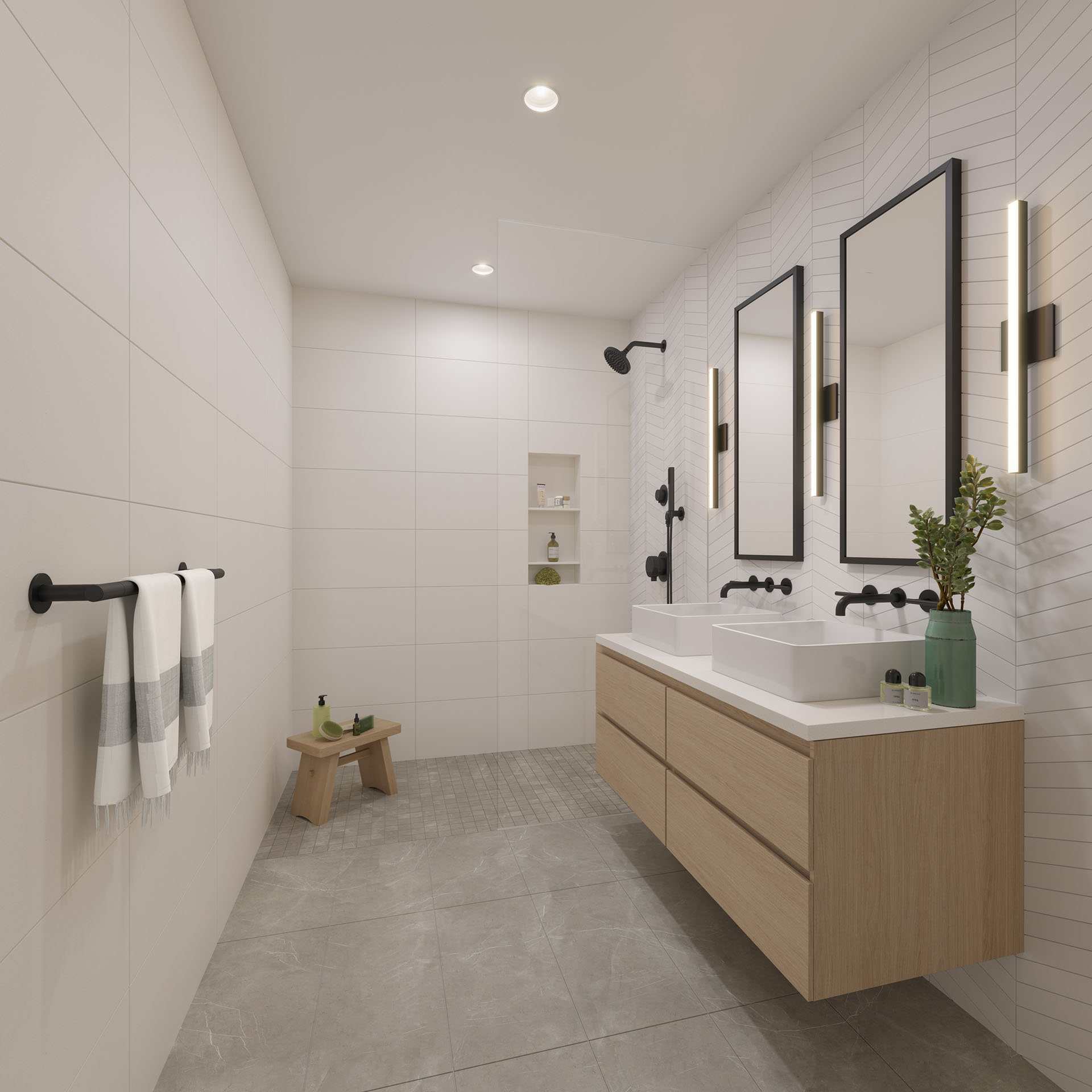 Spacious bedrooms are also awash with natural light and the mosaic of this eclectic neighborhood. As a sparkling new residential building appointed with mega plush amenities, the property certainly captures the zeitgeist of modern living but still radiates the character of its prized predecessor. The story of Greenpoint Savings Bank lives on. 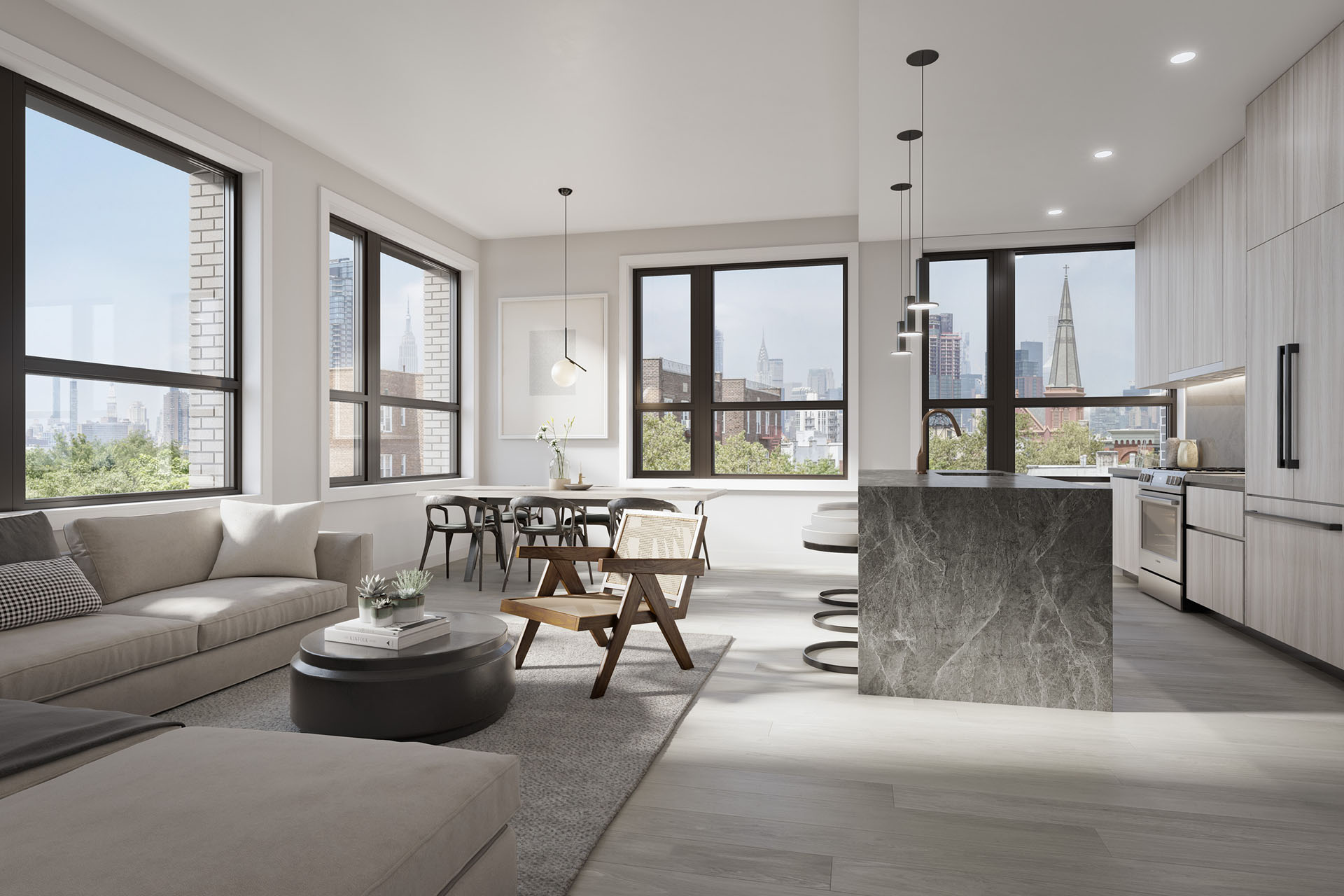 “Our goal for 1080 Lorimer was to preserve the history of the building while creating a one of a kind residence that can’t be found anywhere else in the city,” noted Martin Nussbaum, founding partner of Slate Property Group. “I’m confident we’ve done just that.”