“THE FUTURE OF SURGERY”

In March of 2014, after a full year of training in Atlanta with Intuitive Surgical, maker of the innovative da Vinci Surgical System designed to facilitate complex surgery using a minimally invasive approach Frederick L. Sabido, M.D., performed the first robotic single site cholecystectomy ever done on Staten Island. The successful, painless, and scarless gall bladder removal, which required only 20 minutes to complete, was a benchmark for Sabido, and big news for the borough, as well. 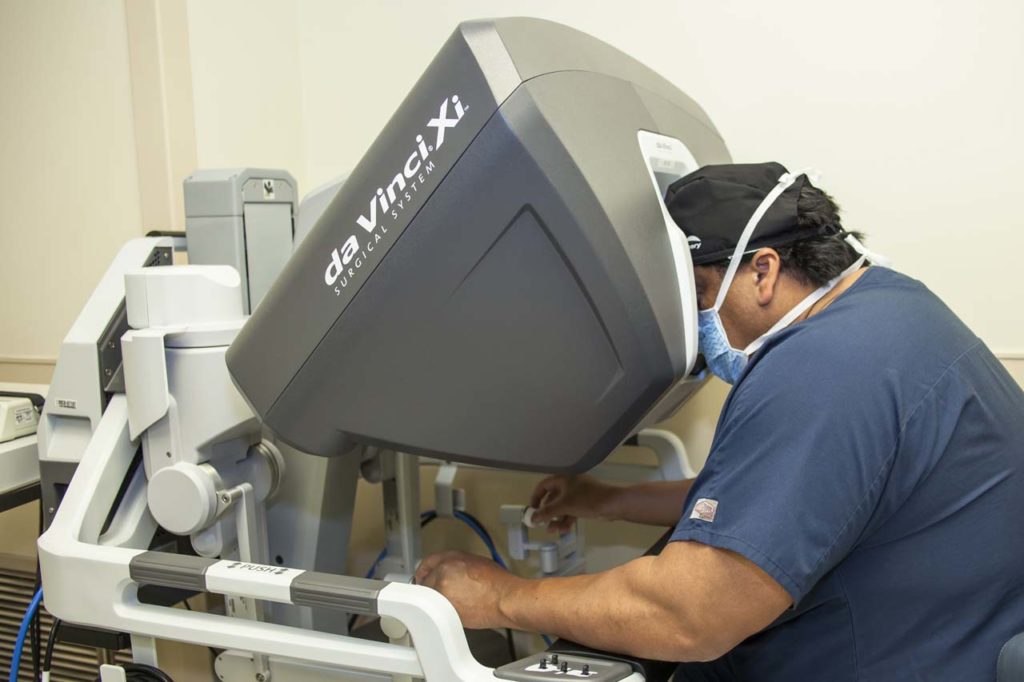 “This is truly the future of surgery,” he noted. “Several studies have predicted that by 2025, 90 percent of surgery will be done robotically and in an ambulatory setting. It’s also been reported that robotic surgery is only accessible to those who can afford it mostly those willing to pay out of network for the service. That’s why I’ve made it my goal to write grants and bring this breakthrough technology to the residents of Staten Island.”

Sabido, who was born and raised on the North Shore, attended grammar school at Saint Teresa’s before graduating from St. Peter’s Boys High School, where he was a two sport varsity athlete, captain of the baseball team, and his school’s first African American valedictorian. Although drafted by baseball’s California Angels out of high school, he chose to study medicine, and, although accepted into multiple medical programs, opted to attend CUNY’s Sophie Davis School of Biomedical Education and the New York University School of Medicine, where he completed the prestigious seven year B.S./M.D. program.

He did surgical residencies at the University of Medicine and Dentistry of New Jersey in Newark and at Staten Island University Hospital, followed by a fellowship in cardiothoracic surgery at SUNY Downstate, where he decided he would focus on minimally invasive procedures.
“I chose surgery because I wanted to be the one who could cure the disease, not just temporize it and control symptoms with medicine,” Sabido said. “As a surgeon, I could actually take out the cancer and cure patients permanently, and chose minimally invasive surgery because…it’s the future.” 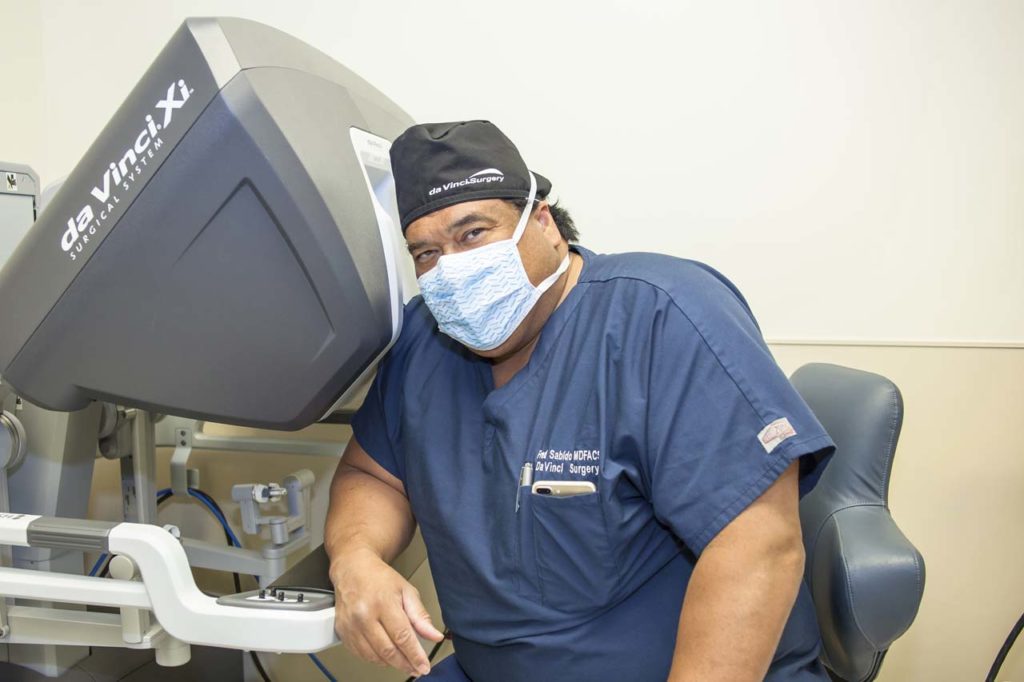 Sabido opened a private practice in the spring of 1997 and has been serving borough residents ever since. He is currently Director of Minimally Invasive and Robotic Surgery and Fellowship Program Director in Minimally Invasive and Robotic Surgery at Richmond University Medical Center, and Director of the Center for Robotic Surgery at Hackensack Meridian Health’s Raritan Bay Medical Center. Sabido is also affiliated with the Mount Sinai Health Network. He is also one of only two people in New York State who holds accreditation as a master surgeon in robotic surgery, and works two weekends a month at a Brooklyn surgery center, doing operations on Sundays for members of the Jewish community who cannot undergo procedures on the Sabbath.

“My grandfather was a Sephardic Jewish pharmacist exiled from Barcelona, Spain. He journeyed to British Honduras by sailboat. My father followed his religion, so I am sympathetic to the religious obligations of that culture,” Sabido said. “I feel blessed to have this purpose bringing these new surgeries to the Jewish community and the residents of my hometown. There are so many other locations that are just now adopting robotics. I’ve done over 700 operations using the da Vinci Surgical System, with a complication rate of less than a half percent.” 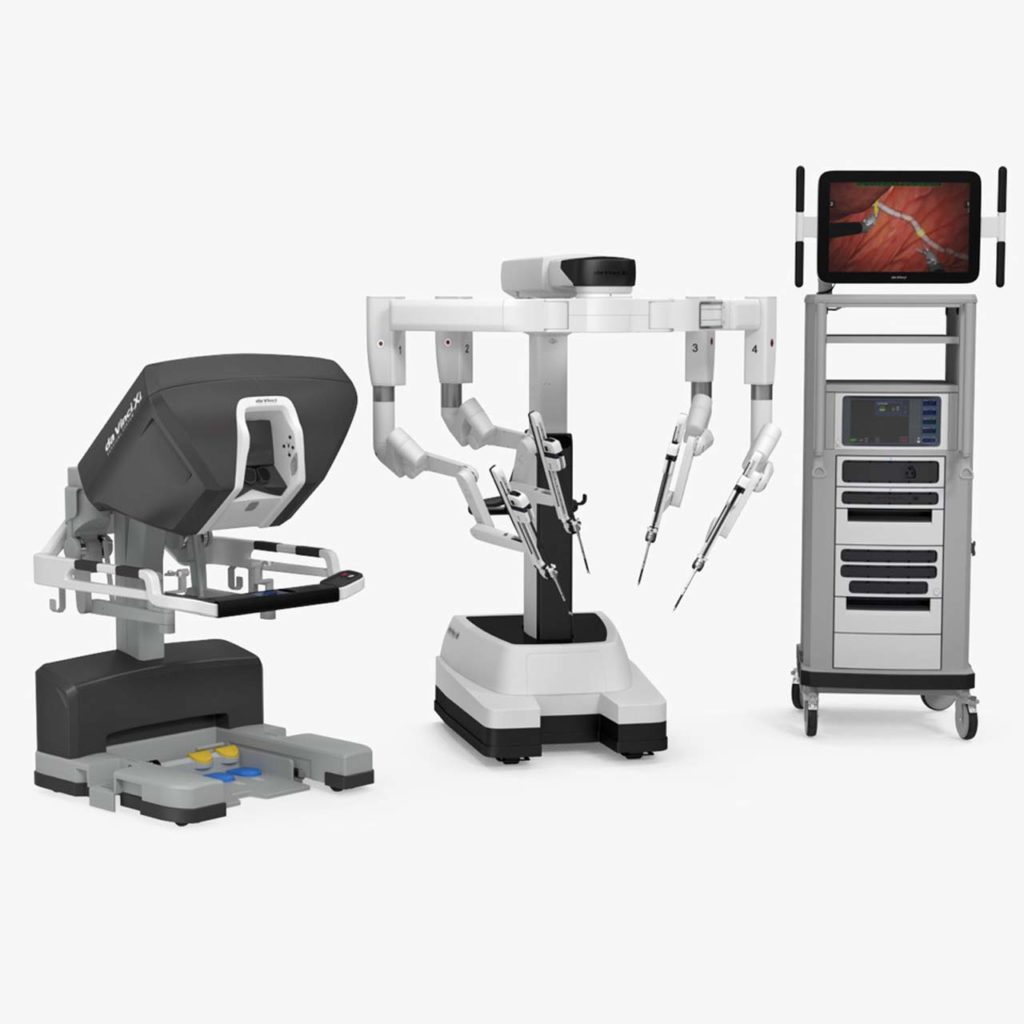 The M.D., who specializes in inguinal, abdominal, and hiatal hernias as well as treating breast and colon cancer robotically, also has experience with a wide range of other robotic procedures, including nephrectomies, gynecologic surgery, colon and rectal surgery, adrenalectomies, inguinal and ventral hernia surgery, anti reflux surgery, hiatal and paraesophageal hernia repairs, and splenectomies. Among the benefits of such procedures are shorter hospital stays and more rapid recoveries.

“Because of the robotic platform, even after a complex procedure, patients are leaving the hospital within 30 hours,” Sabido said. “And without a large incision, they are back to normal at a much faster rate.” Sabido recently added a new medical interest to his portfolio, taking over the hormone replacement therapy practice of Staten Island’s Dr. Barry Gordon. 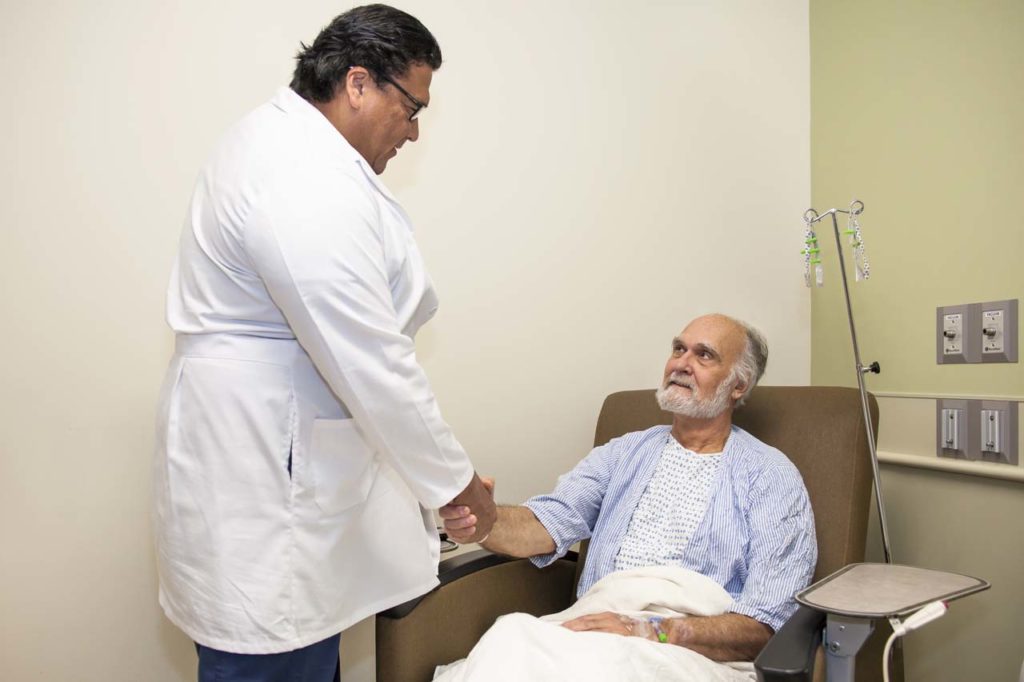 “All medical evidence points to the fact that higher testosterone levels in both men and women help with mental clarity and performance,” Sabido said. “There have been recent articles in the Journal of the American Heart Association and Journal of the American College of Cardiology documenting the cardiovascular benefits such as a decrease in atrial fibrillation by 21%, decrease in cardiovascular risk of heart attack, and increase in male longevity by 8 to 9 years, as well as other studies showing a decrease in female breast cancer of 96 percent. As a surgeon whose goal is to regularly heal patients with cancer and other ailments, I wanted to become involved in this practice, which I truly feel helps patients with their surgery and recovery. I went on the replacement therapy myself, and it helped my performance as a surgeon.”

Sabido lives with his wife and two children on the same street he grew up on. His son plays Division 1 baseball for Wagner College (“while making Dean’s List five semesters in a row,” Sabido said), and his daughter is in the pre-med program at Fordham University. She was selected to do genetics research this summer, and has plans to be a pediatric robotic surgeon. His wife, Jonelle, a fellow NYU graduate, is a senior pediatric physical therapist with the New York City Department of Education. 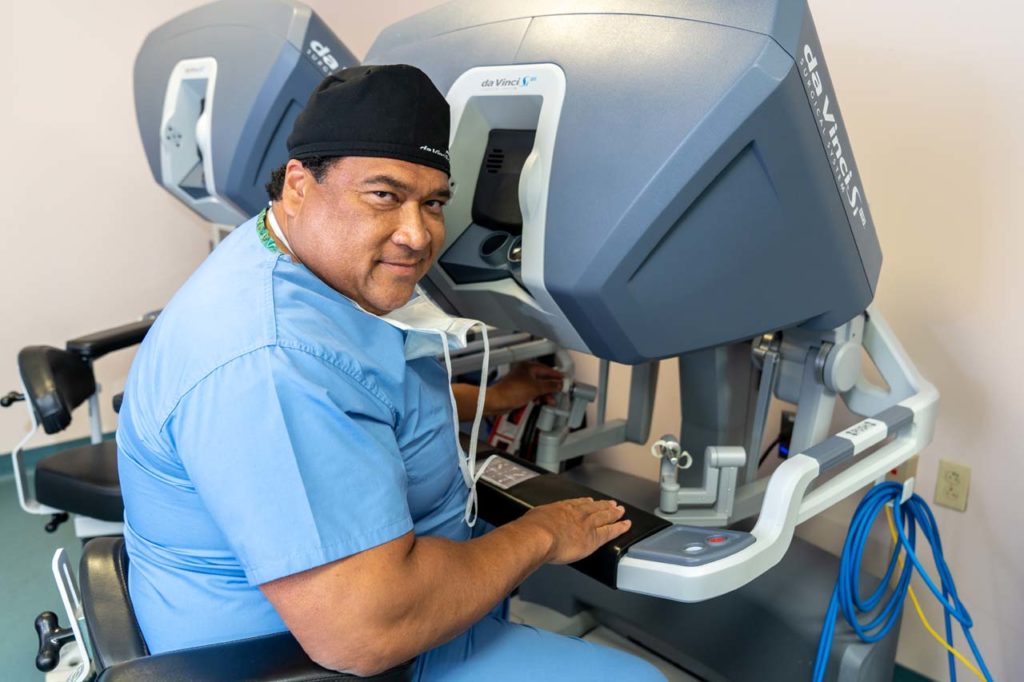 “My family is my life,” the surgeon said. “My parents were truly an inspiration to me. My mother, Almeda Alice Sabido, MSW, was a pioneer for children’s mental health. She was Director of the Children’s Community Mental Health Center of the Staten Island Mental Health Society for 42 years, founded Head Start in Staten Island, and held a proclamation from then Borough President Guy Molinari of Staten Island for her achievements in children’s mental health. My father worked in the Garment District [of Manhattan] and spent all of his free time taking us to baseball and supporting our studies.”

All of which, Sabido said, enabled him to become the person he is today. He remains particularly proud of the work he’s done to bring revolutionary procedures to his hometown, and hopes to advance the borough’s robotic status even further with the installation of a newer, $2 million da Vinci model, which will allow for more complex thoracic and gynecological procedures.

“I’m in the process of writing a grant that will help bring the next generation of robotic technology to the borough,” he said. “With this machine, surgeons from every field will be able to operate this way, and even more complex abdominal, thoracic, and difficult procedures of the head and neck will be able to be done seamlessly. These are procedures that need to be offered here, because we are part of New York City, not a small rural suburb. The future is bright, this technology is on the horizon, and I hope to leave a legacy of advanced treatment here.” 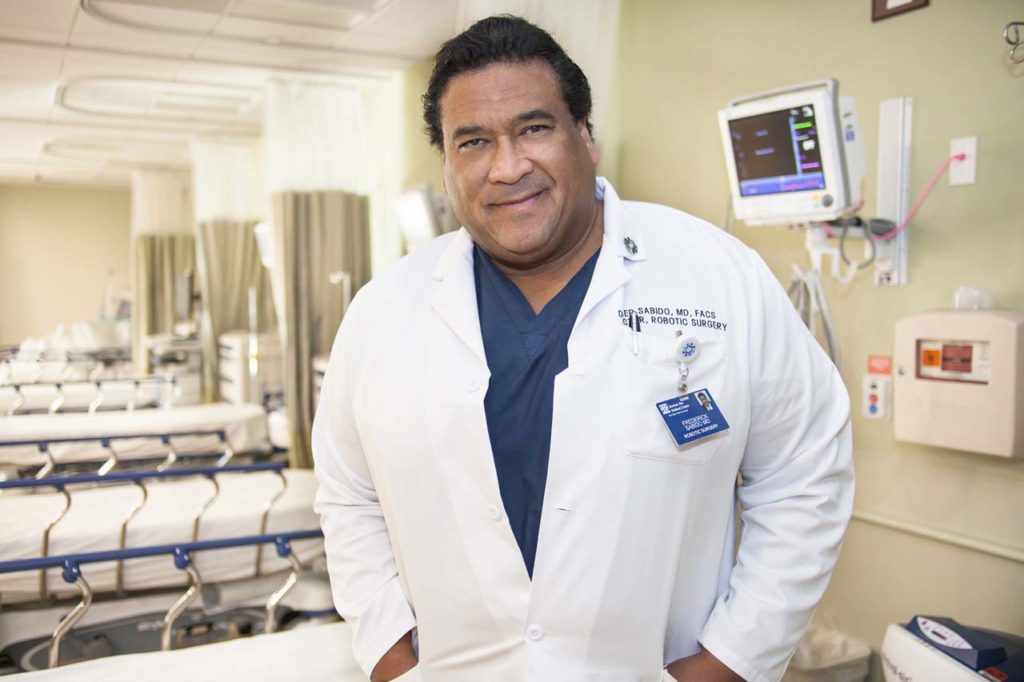