The word’s most expensive cruise ship suite features a better view than the captain’s, a private spa, and a bed identical to that of the Queen of England

Christened in July of last year by former Olympic swimmer Princess Charlene of Monaco and entering service that same month, the 735-foot Seven Seas Explorer is regularly described among industry pundits as the most luxurious cruise ship in the world—costing in excess of $590 million and adorned with stupendous amounts of
Italian Carrera marble and stone, gold leaf, and 473 Czechoslovakian crystal chandeliers. The president of parent company Norwegian Cruise Line Holdings Ltd., Frank J. Del Rio, personally commissioned hundreds of pieces of art for the vessel, including works by Chagall and Picasso.

At the moment the most expensive cruise accommodation available, the ship’s Regent Suite, on the top deck (just above the bridge, no less), is a 3,875-square-foot penthouse with 270-degree views of the horizon. A list of the suite’s amenities would fill a small novel, but is highlighted by a complimentary cocktail party for 8, full-service spa (with dual ceramic heated loungers) and mini-pool, a private garden terrace with partial glass enclosure, private dining room, a $300,000 Steinway Grand Maroque Piano designed by Dakota Johnson, a dedicated butler, Murano glass bowls
from Venice, and French Lalique objets d’art in the two bedrooms. And, as you stand at the top of your own 14th deck, with a better view than the captain’s, you are provided with a dedicated set of instruments to track engine performance, course, and speed.

Ready to tuck yourself in after a complimentary bottle of Veuve Clicquot? The master bed, which costs no less than $200,000, is filled with horsetail hair and is virtually identical to the Queen of England’s in Buckingham Palace. 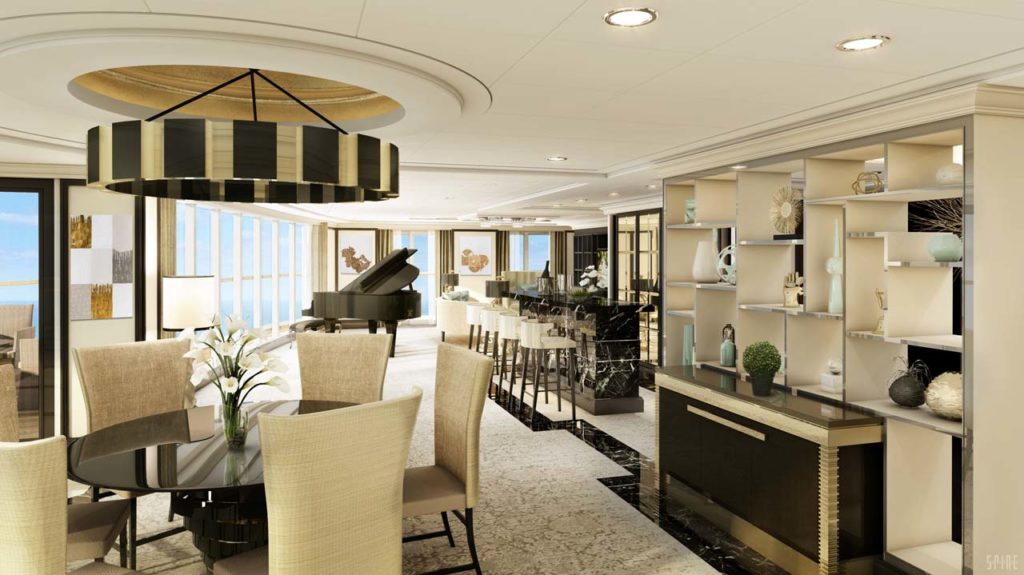 Seven Seas Explorer
Regent Suite
From $29,999 per person
for a variety of cruises from
Northern Europe to the
Mediterranean. rssc.com