SET IN A PRESERVED 19TH CENTURY CHURCH, THIS VIBRANT ITALIAN EATERY BRIDGES OLD WORLD HOSPITALITY WITH CONTEMPORARY FLAVORS AND SOME OF THE MOST AUTHENTIC DETROIT-STYLE PIZZA OUTSIDE OF THE MOTOR CITY

In the year 1850, nearly half a century before Matawan would officially be designated a New Jersey borough, a humble church was erected on Main Street, serving as a gathering place for residents of the young community. Over the next 170 years, the building would witness a vibrant enclave grow around it, weathering war and natural disaster and taking joy in weddings, baptisms, and communions. Today, several decades have passed since the church’s last sermon, but its history as a gathering hub lives on through A Salute. 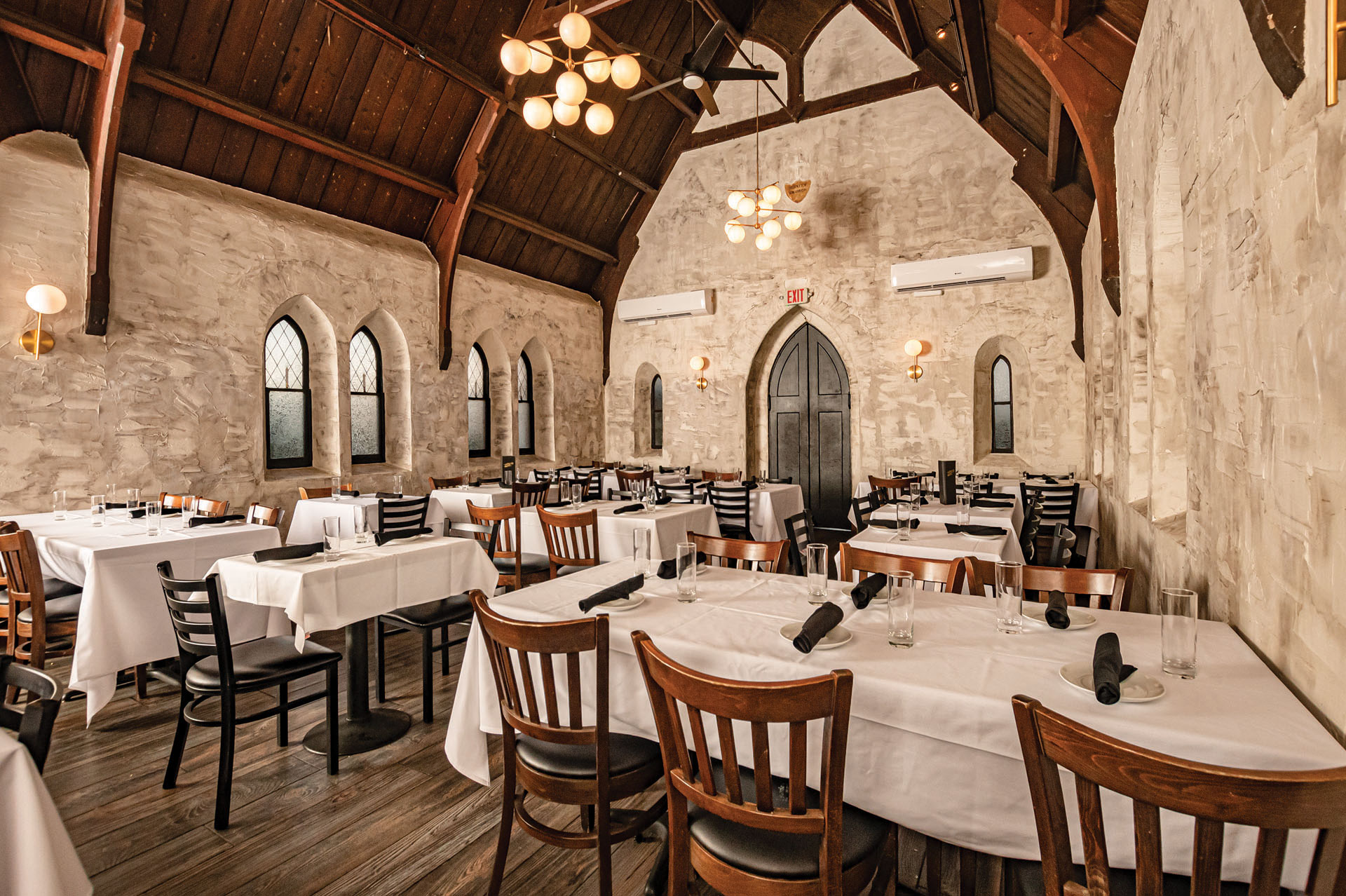 Founded by Paul Pape, an accomplished entrepreneur with several successful enterprises currently in the water conservation, replication, and filtration sectors, A Salute is a buzzing Italian restaurant and full-service bar that serves all the staples of classic Italiano dining with a few contemporary surprises. The 7,000-square-foot dining destination comprises a formal dining room housed inside the walls of the church, featuring crisp white linens covering dark wooden tables, plus an industrial-chic interior bar and massive 250-seat outdoor bar that stretches 50 feet and hosts daily happy hour. Local bands regularly set up to keep the energy high as mixologists stir Manhattans, mules, and spritzes. For special occasions, a semi-private table is tucked inside the former altar, the perfect romantic nook for sharing a cannoli by candlelight with a bottle of Chianti. “Matawan is a great town but didn’t have a lot of entertainment,” noted Pape, who owns and operates the restaurant alongside his business partner and long-time friend, Frank Rizzuto, who also owns Goodfellas Pizza on Victory Boulevard in Staten Island. “When we built this restaurant, it became a destination. It pulls people from all over Monmouth County and beyond as it’s only 15 minutes from the Outerbridge.” 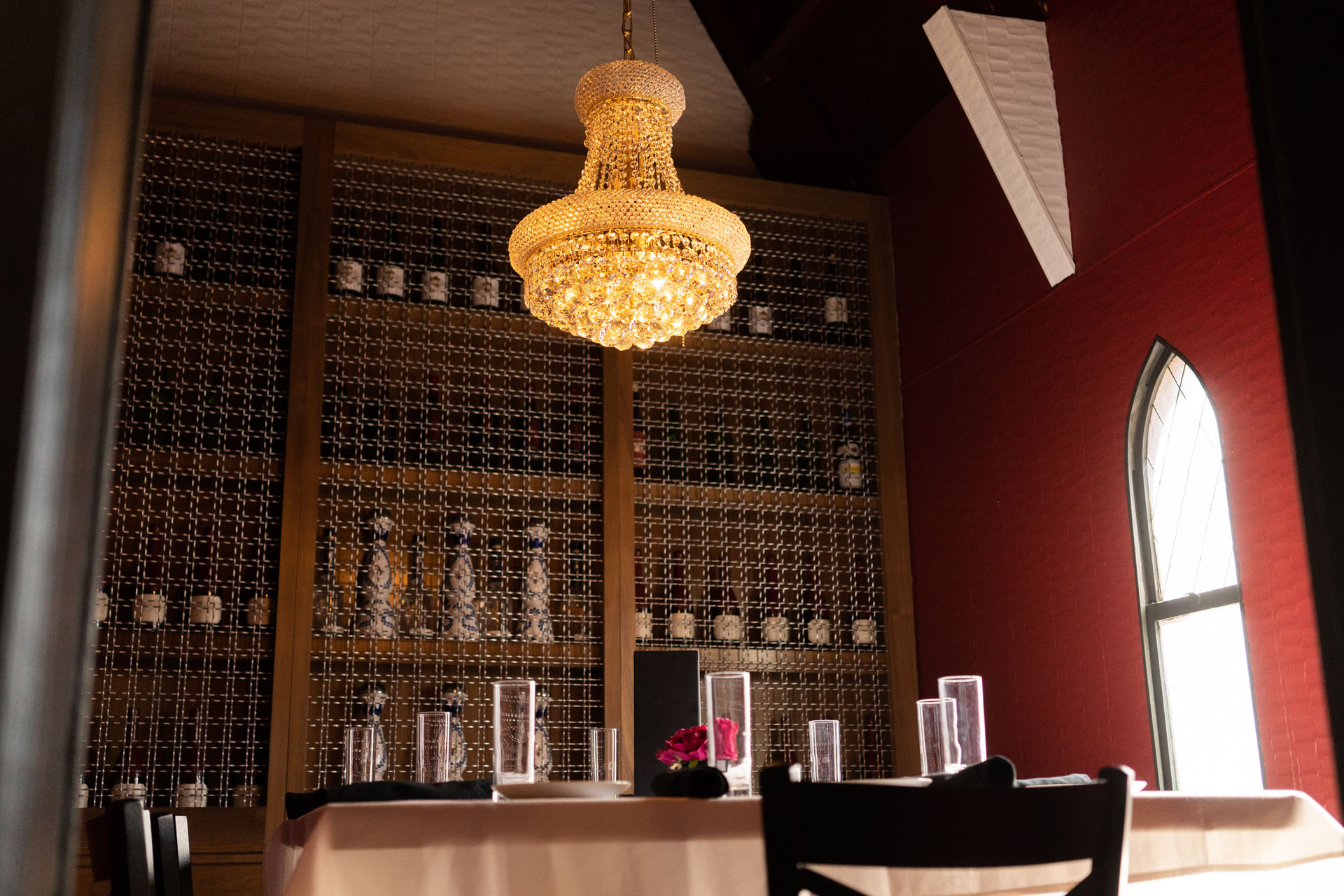 In 2022, Pape and Rizzuto take over as the sole operators of the restaurant. A Salute is open seven days a week for lunch and dinner, serving a selection of scratch-made pastas, seafood, steaks, and Italian mainstays like chicken parm and baked eggplant. Burrata is served with the diner’s choice of roasted peppers, prosciutto, soppressata, long hots, or eggplant caponata, while a baked clam starter is smothered in bacon, peppers, parmesan, and breadcrumbs. The menu recently debuted a new steak section of USDA prime cuts, including Kansas City, NY Strip, and Bone in Ribeye “Cowboy,” along with a new full lunch menu. Pizza is also a standout, but unlike traditional Italian haunts, the crust is thick and fluffy with a crispy bottom.

“In Matawan there are about 12 pizzerias,” noted Pape. “We wanted to offer guests something unique and different, so we serve Detroit-style pizzas baked in steel-welded pans. They’re delicious.” 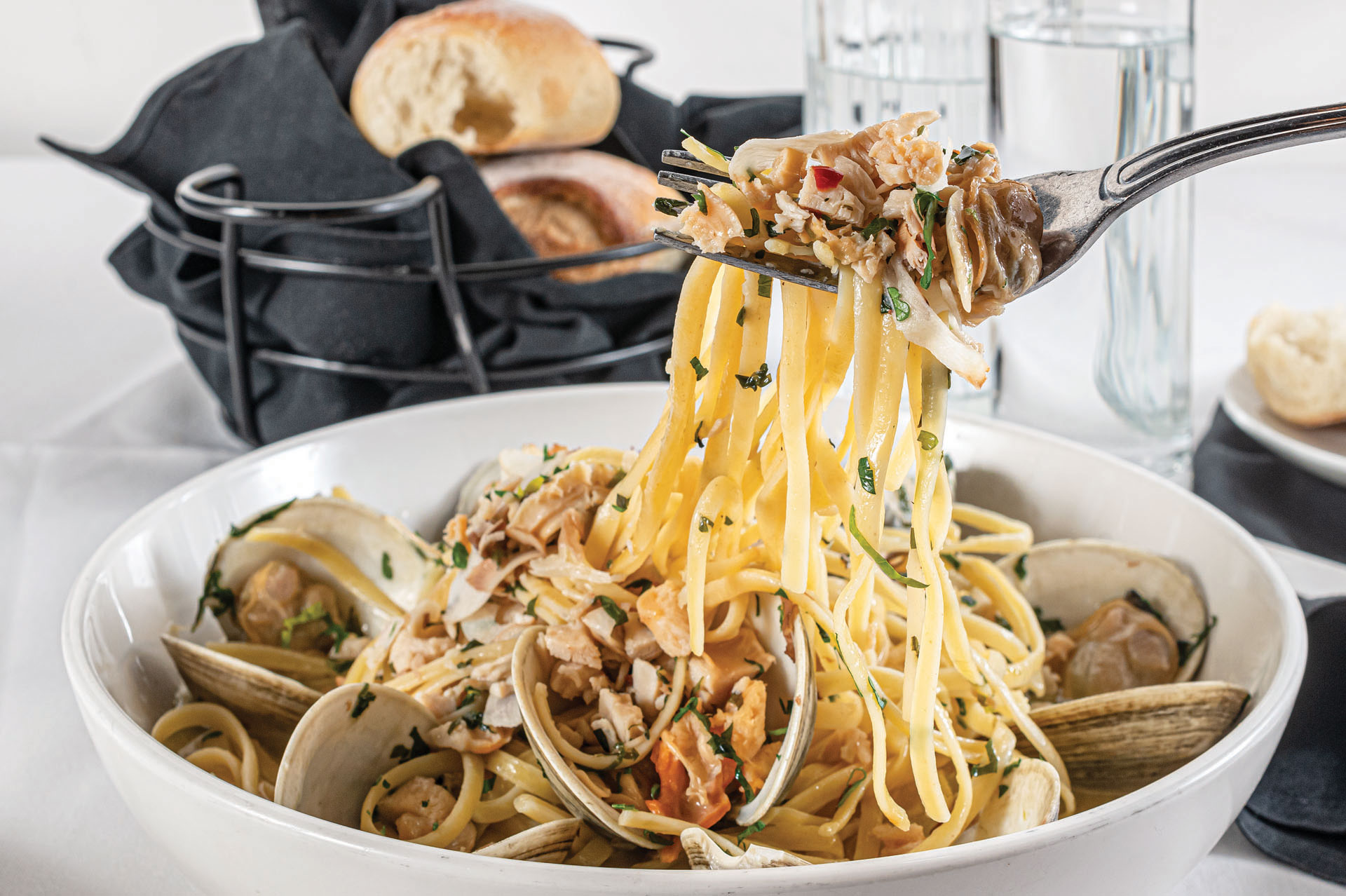 In the 14 months since its grand opening, the eatery has built a loyal following, but A Salute’s early days were marked by uncertainty not due to lack of vision or talent, but because a brutal pandemic sent shock waves throughout the globe, crushing the hospitality industry only three months after Pape purchased the space.

“I thought, ‘Well this is bad luck,’” laughed the founder, who noted the idea of opening a restaurant had never been on his radar. He was presented with the opportunity by a good friend whom he met through their sons, mostly in jest at first, when the space’s former restaurant of 40 years was put on the market. 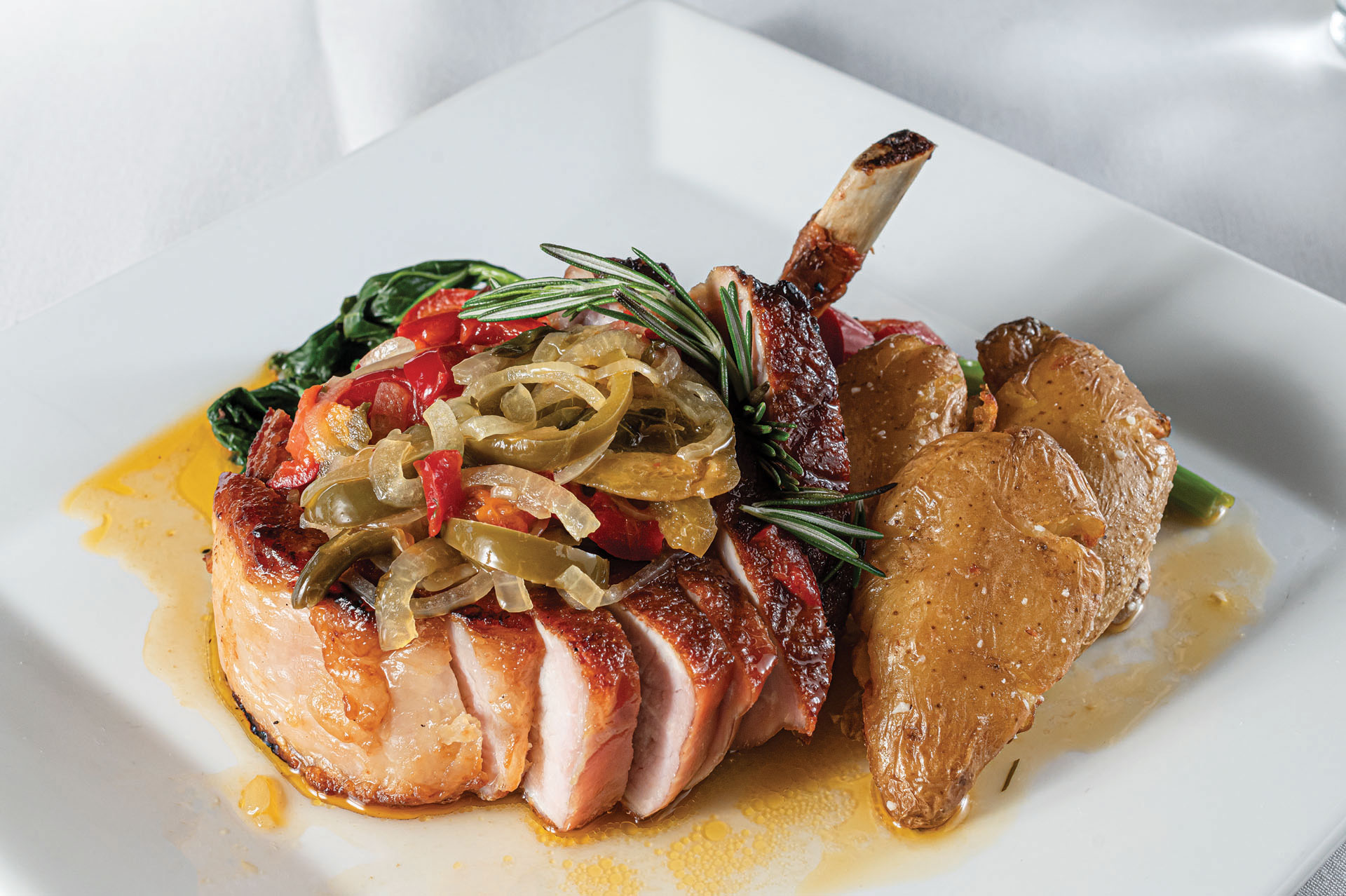 “I didn’t know anything about the restaurant industry, but when my friend and I went to look at it, I immediately saw the space’s potential. It was a bit worn, but it had real possibility. Actually, the first vision I had was of a beautiful outside, just like all other great towns that have restaurants going out into the street, welcoming people in to enjoy dinner in the fresh air.” 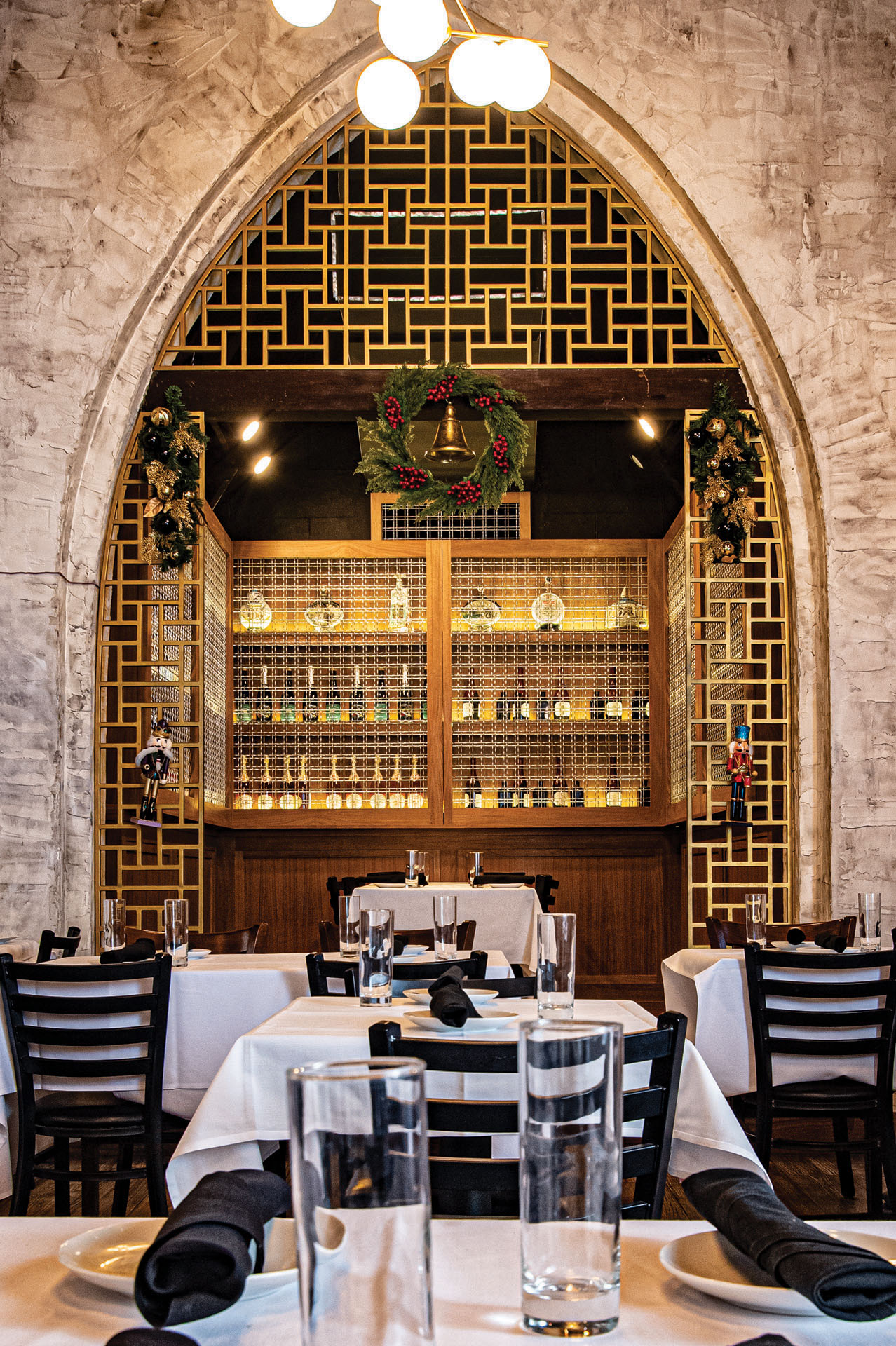 The new owner might not have been familiar with the nuances of running a kitchen or knew the ideal temperature for bubbling a Detroit-style pie, but two decades of entrepreneurship had taught him that the key to launching a successful business was assembling the right team.

“Putting together a great team was always my strength,” he said. “I didn’t try to pretend I was a chef or a cook. I put together an incredible management team and hired a great staff, a mix of veteran and young employees. I didn’t want to hire purely based on experience; I wanted to hire great people. The staff is always getting compliments on how friendly and genuine they are, how real they are with customers.” 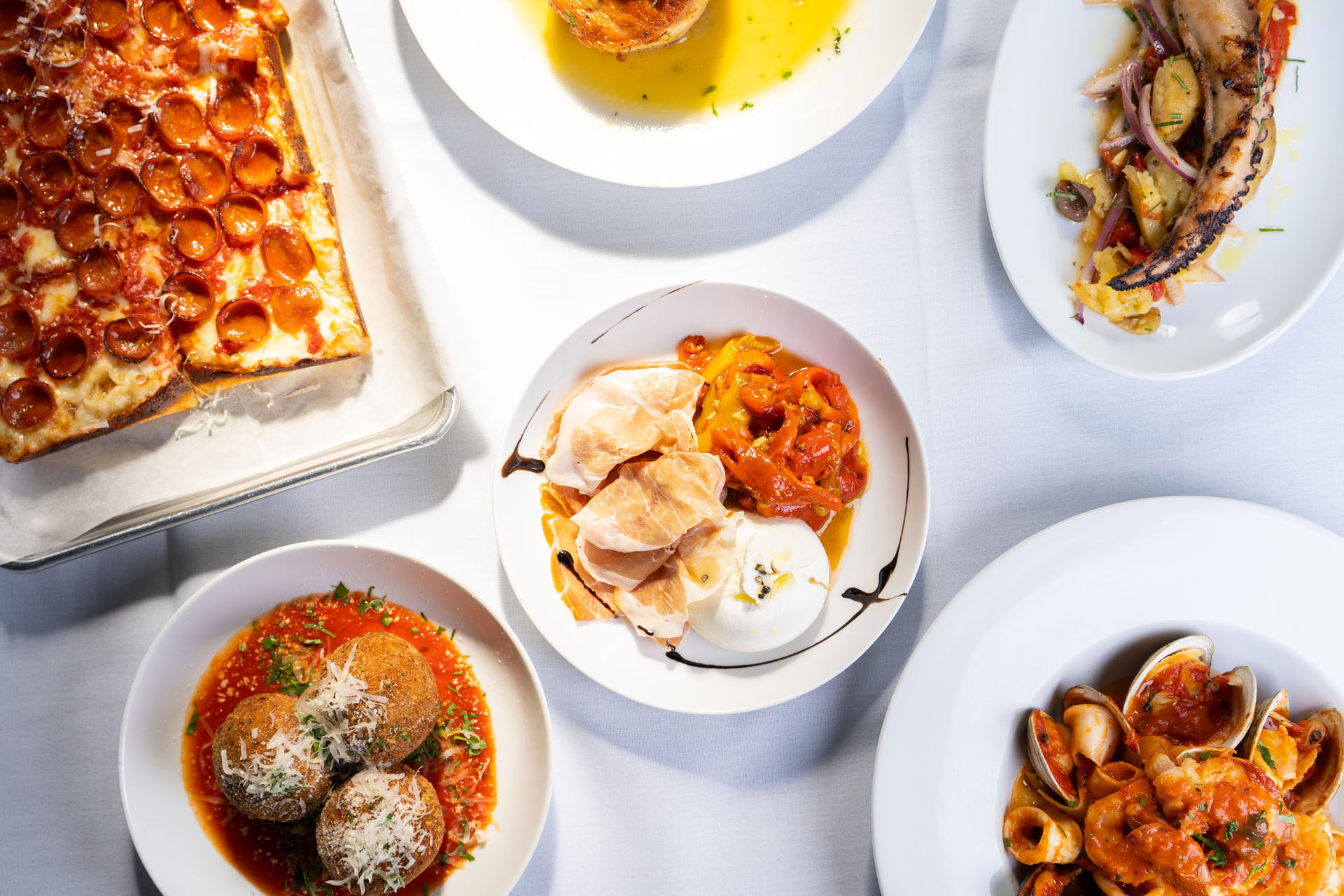 While the state eagerly awaited restaurant re openings after the onset of COVID, Pape took the opportunity to bring his vision to life. He employed an ambitious renovation, covering the cinder block-lined walls of the church’s interior with a warm, luxurious Venetian plaster, modernizing the bar, and building out the massive outdoor area. In December 2020, the restaurant was ready to open its doors to a public starving for a night out. And because a winter surge led to increased restrictions in NYC, A Salute welcomed many patrons from the Big Apple, too.

“This bad situation actually turned out to be good for us because we opened in the middle of the pandemic, and people were excited to leave their houses and do things, safely of course. We are only 15 minutes from the Outer bridge, so people started coming over the bridge to New Jersey to enjoy a night out.” 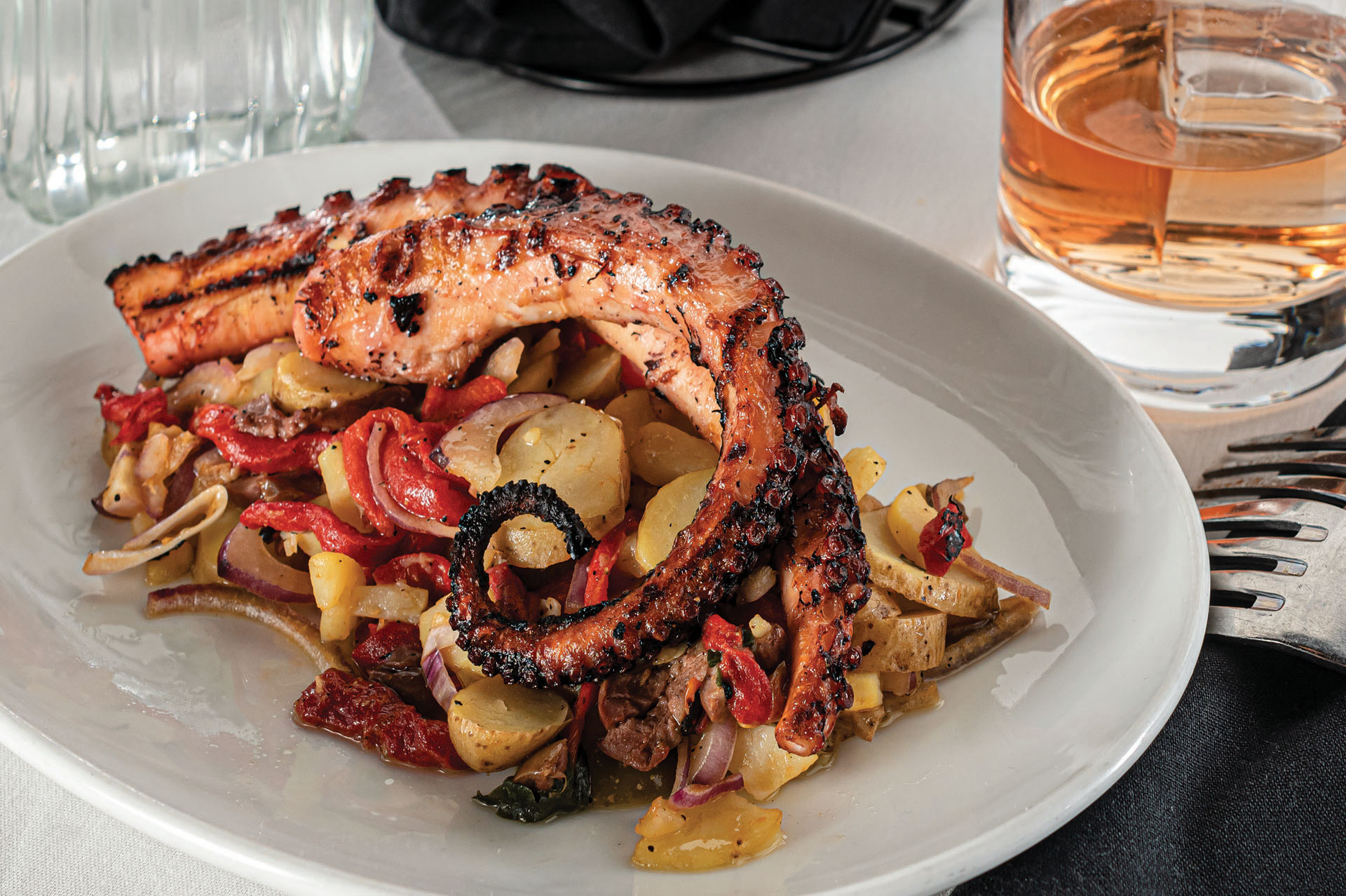 When asked how he found his chef, whose juicy pork chop giambotta and pasta Bolognese are already locally famous, Pape responded with a laugh, noting, “He was sent from above.”
He continued: “As I was building the restaurant, people would ask me if I had a chef. I told them I needed to build the space first and everything else would fall into place. Everyone told me that’s not how it works, that I had to find a chef immediately. About 60 days before we opened, I was doing something routine like painting a wall or sweeping the parking lot, and this guy pulled into the parking lot. He wasn’t necessarily dressed like a chef, but he walked right up, handed me his resume, and said he thought he’d be a great fit. I took one look and realized he had worked at these incredible New Jersey restaurants, places that hit the atmosphere we wanted to create. It was the perfect match.” 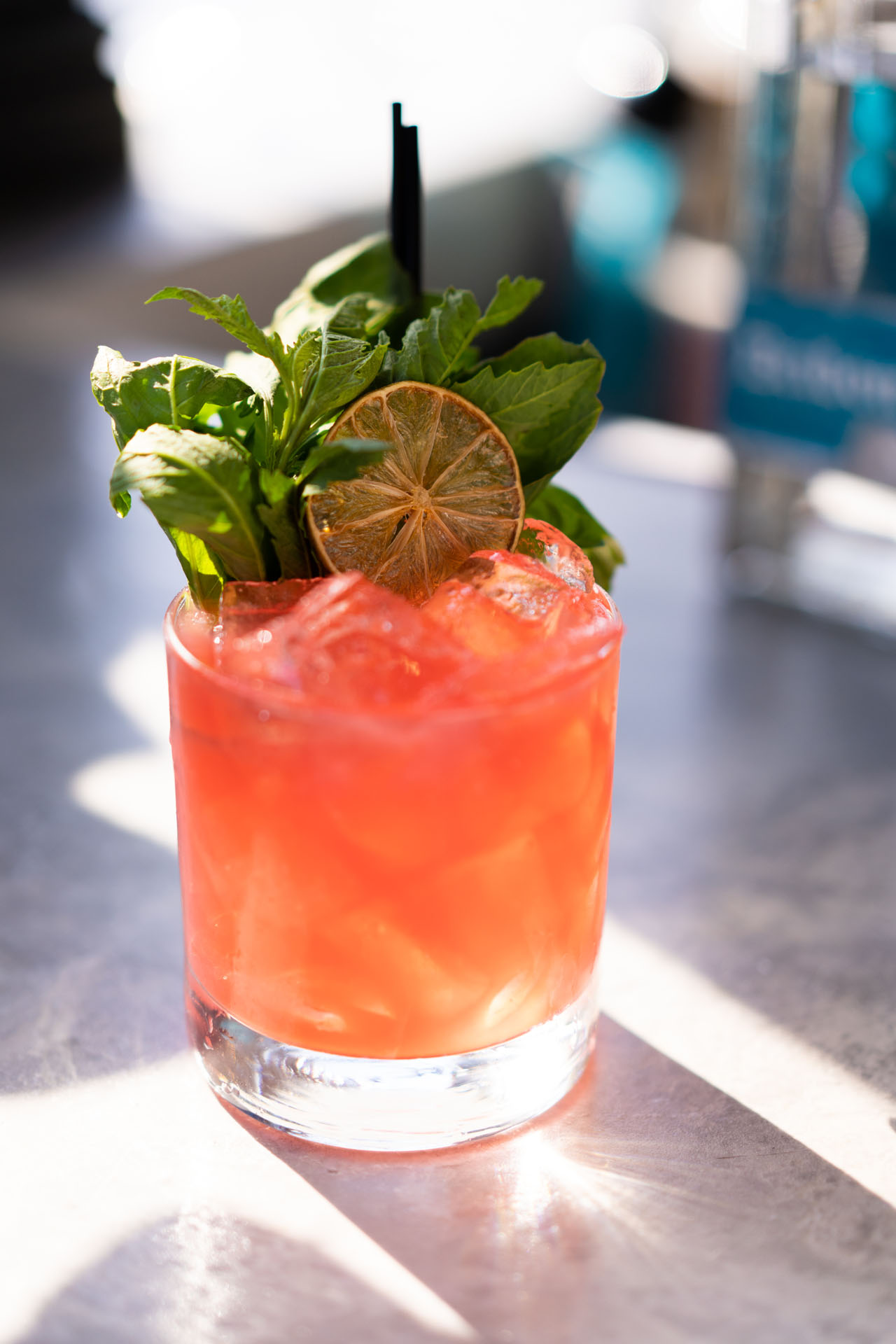