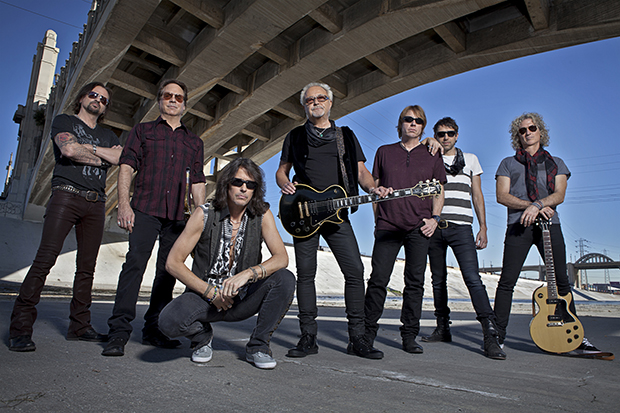 With back-to-back performances at the Music Box at the Borgata in Oct. and one at the Count Basie Theatre in Feb., the iconic ’70s rock band Foreigner is ready to remind New Jerseyans that authentic classic rock is as alive as Netflix.

Founded in 1976 by guitar player Mick Jones, the band’s name stemmed from the fact that half of the group was British while the other half was American. One thing that was never foreign to the group, however, was success. Foreigner has an astounding 16 “Top 30” hits, 10 multi-platinum albums, and over 80 million record sales worldwide.

In 1977, the group’s debut self-titled album, Foreigner premiered with astounding success. With hits like “Cold as Ice” and “Feels Like the First Time,” the record lingered in the Top 20 for a solid year.

The fellas continued to churn out hit records in follow-up albums Double Vision, Head Games, and 4, and singles “Juke Box Hero,” “Waiting for a Girl Like You,” and “Urgent” were all greeted with bottom line approval.

Despite departures by key members of the group Al Greenwood and Ian McDonald, Foreigner’s rise continued, before peaking with the release of the massive No. 1 single, “I Want to Know What Love Is,” in 1984.

Over the succeeding decades, other band members split off to pursue their own projects before resurrecting Foreigner for the release of the 2009 record Can’t Slow Down.

This summer, the group embarked on a multi-city tour, splitting the bill with legendary rockers Styx and special guest, former Eagles rocker Don Felder. A highlight of “The Soundtrack of Summer” tour came when Foreigner invited a group of 20 giddy teens from the Frenship High School Madrigal Choir in Lubbock, Texas to sing with the band on “I Want to Know What Love Is.” Stops in Maryland and Iowa also included surprise guest youthful ensembles.

Foreigner’s thunderous current performances tread as much on the side of new hits as classic tunes. The shows have featured an electric seven-piece band propelling a spirited set list that covers most of their timeless sing-a-long hits, too, rest assured.