TO FULLY EXPERIENCE THE EPITOME OF CLASSIC AMERICAN ADVERTISING ART THAT DEFINED AN AGE, FEAST YOUR EYES ON THE CAPTIVATING CREATIONS OF ROBERT COTTINGHAM

A retrospective of Cottingham’s work was featured at the Smithsonian American Art Museum, and is part of the collections of the Museum of Modern Art and the Tate Museum in London. In 1990, he was elected into the National Academy of Design as an Associate Academician, and became a full Academician in 1994. The Brooklyn native’s unique creations continue to be coveted by collectors, proliferate in international collections, and are highly sought after as décor focal points.

In 2005, leapfrogging upon the success of previous artist/ publisher collaborations, the extraordinary, well-established artist appeared on the radar of Greg Smith, owner and publisher at Contemporary Art and Editions. Cottingham was willing to collaborate on the creation of the definitive print portfolio of his career entitled “American Signs.” After more than four years of painstaking work by the artist, the publisher, and the master printer, the American Signs portfolio of 12 silkscreen masterpieces was completed.

“Those years, working at the White Barn print studio in Ridgefield, Connecticut, now Gary Lichtenstein Editions at MANA in Jersey City, witnessed a brilliant example of the intersection of process and fine art wherein an artist uses one medium in this case screen printing to inform his or her work in another medium in this case oil painting,” said Smith. “Bob was working in the print studio experimenting with fine line color and shadow effects, and then using that knowledge to inform his paintings at his home studio. In turn, he would use his work in the painting medium to make adjustments to his prints.” 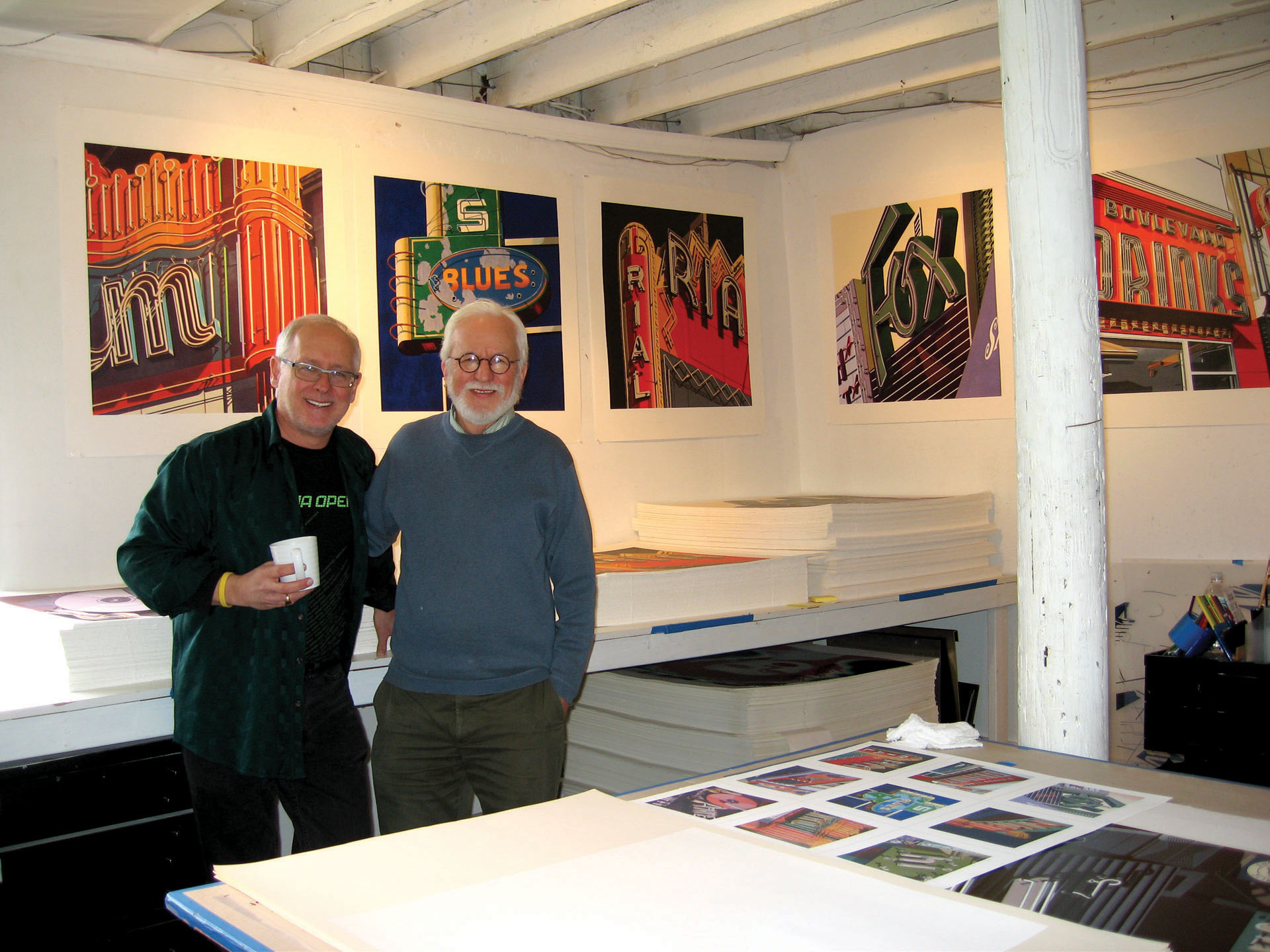 Smith explained that this continuous learning process is a hallmark of many great artists of our time working from photography to sketch, to color sketch, to drawing, to printmaking and painting. This also ties into how the artist sees himself in the pantheon of great artists working in his lifetime.

“Cottingham always maintained that his work ought not to be so closely associated with what is commonly regarded as ‘Photorealism’ as with the notion of a reverence for America as captured in the Americana of time and symbols,” said Smith. “His prints, paintings, and drawings have a narrative quality about them that speaks to American optimism, energy, and growth. Placing him in the conversation with artists like Stuart Davis, Edward Hopper, and Andy Warhol is perhaps more apt than to place him with photorealists, albeit giants, like Richard Estes.”

Cottingham earned a Bachelor of Fine Arts degree at the Pratt Institute after serving in the military. Early on, he freelanced in applied art and graphic design. He began using photography as part of his artistic process. He left advertising to concentrate on painting and teaching, including at the Art Center College of Design in Los Angeles and the National Academy of Design in New York. He was the artist-in-residence at Wesleyan University in Connecticut from 1987 to 1992.

“Working alongside Bob and Master Printer Gary Lichtenstein and his staff was a privilege,” said Smith. “I’ll never forget how, as we proofed examples of a work from the portfolio, I made what I suppose was a pithy observation about color relationships that impressed Bob. He turned to me, complemented me, and asked if I had ever worked as an art director. Then I knew that I must be doing something right!”