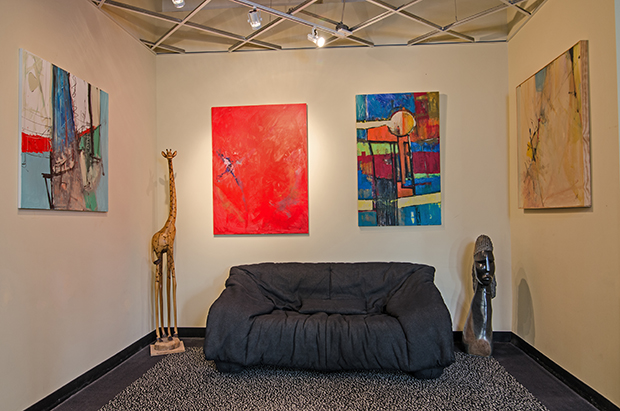 In grade school, Wayne Lerman picked up a pencil and Jon Gnagy’s famous Learn to Draw sketchbooks and hasn’t stopped creating since—his life of art and architecture intertwining in ever more fascinating ways. After three decades as a noted architect, Lerman’s passion for painting has now emerged on its own in the form of color-splashed works that are getting increasing attention and acclaim.

As president of the W. Lerman Architecture firm of West Long Branch, Lerman practices what he termed, “intelligent architecture:” blending all components of the building process— creativity, economics, engineering, function, environmental sensitivity, and site design—into solutions that unify successful projects. He has put his stamp on corporate and office complexes, medical and retail facilities, private residences, and his own Red Bank home. Over time, a signature personal style of mixing geometry with color emerged, guided by influences as various as Frank Lloyd Wright, Eero Saarinen, and his own cousin (also an architect).

Over 30 years, the award-winning firm has striven to make elegant statements while maximizing building functionality, efficiency, and occupancy comfort. Among its better-known projects is the Raritan Center Exhibition Center in Edison, the Monmouth County Agricultural Building in Freehold, the Town Square Shopping Center in Old Bridge, Suburban Propane Corporate Headquarters in Hanover, and Monmouth County’s majestic 9-11 Memorial atop Mt. Mitchell in Atlantic Highlands (which looks out over the World Trade Center site). The last project was especially emotional, the architect explained, because two of his fellow committee members lost loved ones in the attack.

In 2010, W. Lerman Architecture was selected to renovate the 185,000-square-foot 1940 American Stock Transfer & Trust Company in Brooklyn. The “complex project resulted in a fabulous transformation,” he explained, and featuring the integration of sustainable and green products and systems, along with stateof- the-art energy management, lighting, heating and cooling.

Reviewing the scope and proliferation of Lerman’s decades of brick and mortar productions, it’s easy to understand, then, why he might also be attracted to a markedly different form of expression—in his case abstract impressionist painting.

“I have always been interested in art and design, and consider myself an artist,” Lerman said. “In sixth grade, I wrote a career report choosing architecture, and took outside courses in art while at Arts High School in Newark where I grew up.”

He first started painting in the late ’70s and ’80s, attending the Summit Art Center Studios where he studied painting, sculpture, and jewelry making. An “accidental” stop at the Art Alliance gallery in Red Bank led to an evening abstract class at The Guild of Creative Art in Shrewsbury where he has continued attending classes since. Lerman began painting seriously in 2007.

“I choose to do abstract impressionist work, as I deal with realism every day,” he related. “I did not want to paint landscapes or bowls of fruit. The creation of form, color and texture inspire me. I have now developed my own style and am always exploring new techniques of applying paint.”

This second career advanced in 2008 when his work began to be selected by juried shows. In addition to displays in his office and home, Lerman’s art hangs currently in the Abstract EXpressions Gallery in Mount Holly and The Gallery on Grant of the Axelrod Performing Arts Center in Deal. During the opening night reception of his one-person show of more than 35 paintings in Deal, he sold eight pieces and was commissioned for another. His works also hang in private homes as well as corporate and medical offices.

“In my art, I try to express color, form, and textures,” Lerman explained. “My work does not grow from a visible form, but evolves as I develop the relationship, color, and texture in a composition…that creates visual excitement. Abstract expression for me is a way to get out of the box without limitations of budget, function, and rules, which are elements in the creation of architecture.”

Lerman attended University of Oklahoma School of Architecture and is a graduate of Pratt Institute, with a Bachelors of Architecture and a Masters in Urban Planning. He served on the Holmdel Planning Board from 1990 to 1993, and the Asbury Park Technical Review Committee in the ’80s, which “…gave me a unique opportunity to be on the other side of the table.” Among his favorite projects was the creation of a residential artist’s studio in Holmdel, as well as his own Holmdel home where he lived for 20 years before moving to Red Bank.

“I believe architecture is a true life form,” he said. “Buildings contribute to our daily lives in business environments, where we live, and where we play. It contributes to how we feel by the personality it creates. I believe good architecture contributes positive energy, comfort, style, and feelings.”

He applies that same devotion to the use of light, blends of color and materials, and a distinctive painting style that has generated nearly as much buzz as his buildings.