GRAB YOUR SUITCASE AND BRING AN APPETITE TO THESE OVER THE TOP GOURMET GETAWAYS FROM CALIFORNIA AND D.C. TO MAUI AND THE MALDIVES

DINNER IN THE SKY
Various locations, $$$$
Launched in Belgium in 2006 by communications agency Hakuna Matata and e Fun Group, a company that specializes in amusement park installations, this crane suspended restaurant and kitchen makes a point of engaging marquis chef talents like Gaetan Colin (seen next page), Pierre Gagnaire, and Marc Veyrat. It oats diners securely strapped to what seems a hybrid of dining chair and pilot seat approximately 150 feet in the air for a multicourse and unforgettable experience. The concept quickly grew, and Dinner in the Sky has thrown similarly lofty a airs from Paris to Vegas, Sydney to São Paulo 40 nations to date, 5,000 dinners, and counting. 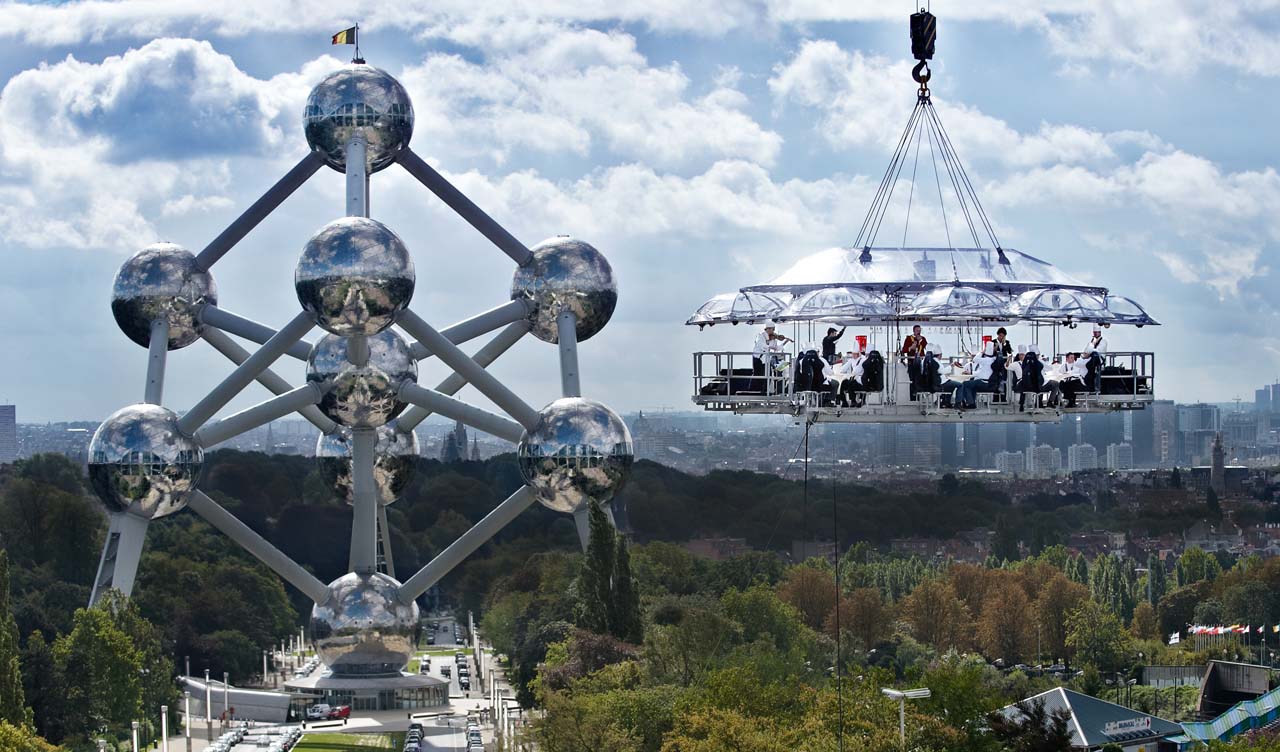 Each meal is custom designed. One with a notably royal flavor was organized for Prince Albert in the skies above Monaco, with Joël Robuchon (named “Chef of the Century” by the Gault Millau guide) at the pass. Other celebrities who have tucked in on high include Japanese singer Hiromi Iwasaki and former Las Vegas Mayor Oscar Goodman.

In recent years, this extraordinary event concept has broadened to include B2B meetings, Marriage in the Sky, Santa in the Sky, and Showbiz in the Sky the last highlighting media events and brands. ere’s even a Swing in the Sky variation, which gives golfers a change to tee off from altitude. Loung in the Sky, meanwhile, has guests sipping Champagne while listening to the sounds of Ghanaian drummers…or perhaps playing bridge, poker, or baccarat…or sipping brandy while enjoying a Havana cigar.

Dinners through December 31 are scheduled for Punta Cana in the Dominican Republic, but charters can be arranged by visiting dinnerinthesky.com. 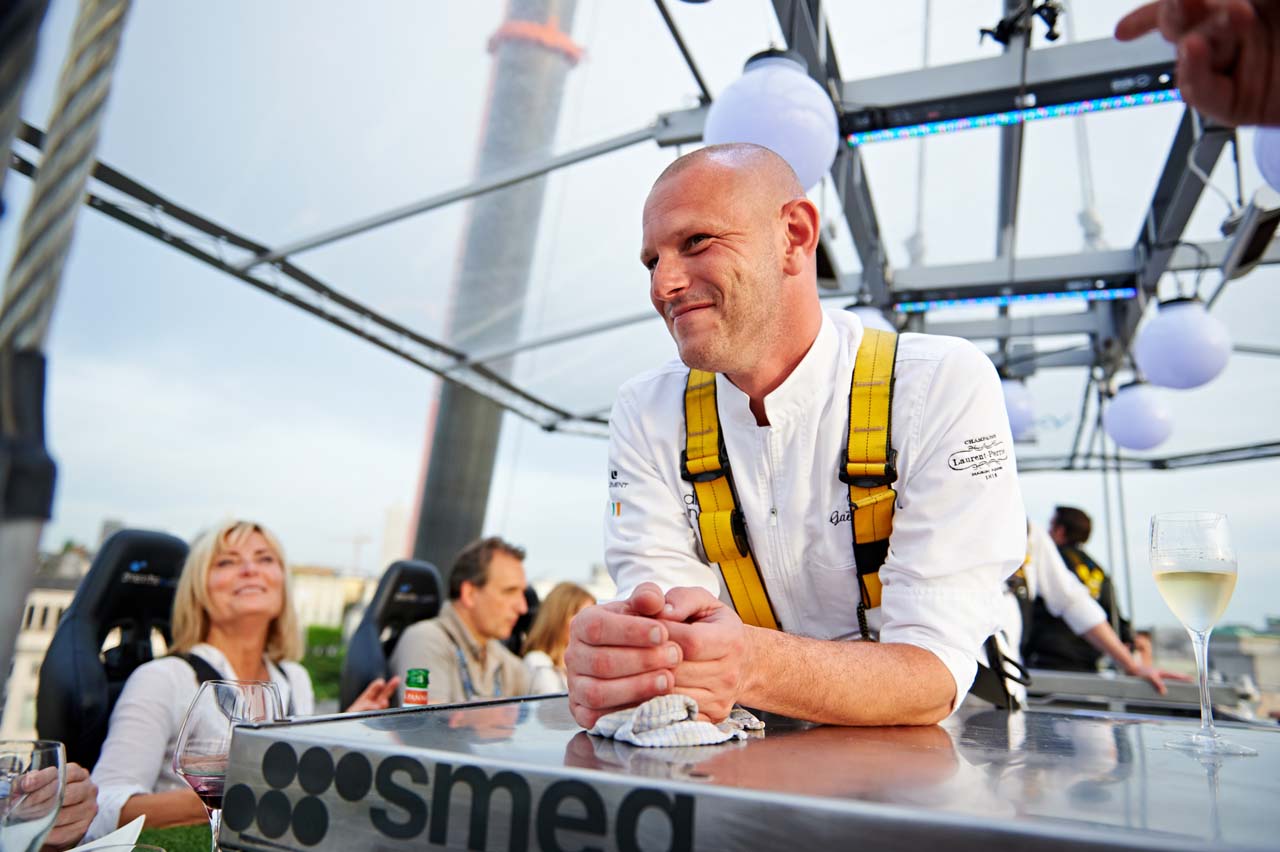 PLUME
The innovative culinary scene in D.C. continues to grow as millions of tourists flock to see new museums and exhibits, such as the International Spy Museum and the National Gallery of Art’s Jazz in the Garden series. Nestled in the luxury boutique hotel, The Jefferson, is one of the capital city’s premier Michelin starred restaurants, Plume. Extending the hotel’s homage to Thomas Jefferson, its ingredients are inspired by our third President’s love of French food, and also showcases Executive Chef Ralf Schlegel’s background in ne dining, including a two year plus stint at Marcel’s in the West End. Patrons dine in a Washingtonian/European style interior, special nooks of which (such as the Bird’s Nest private cubby under a century old chandelier) can be reserved for a private experience. 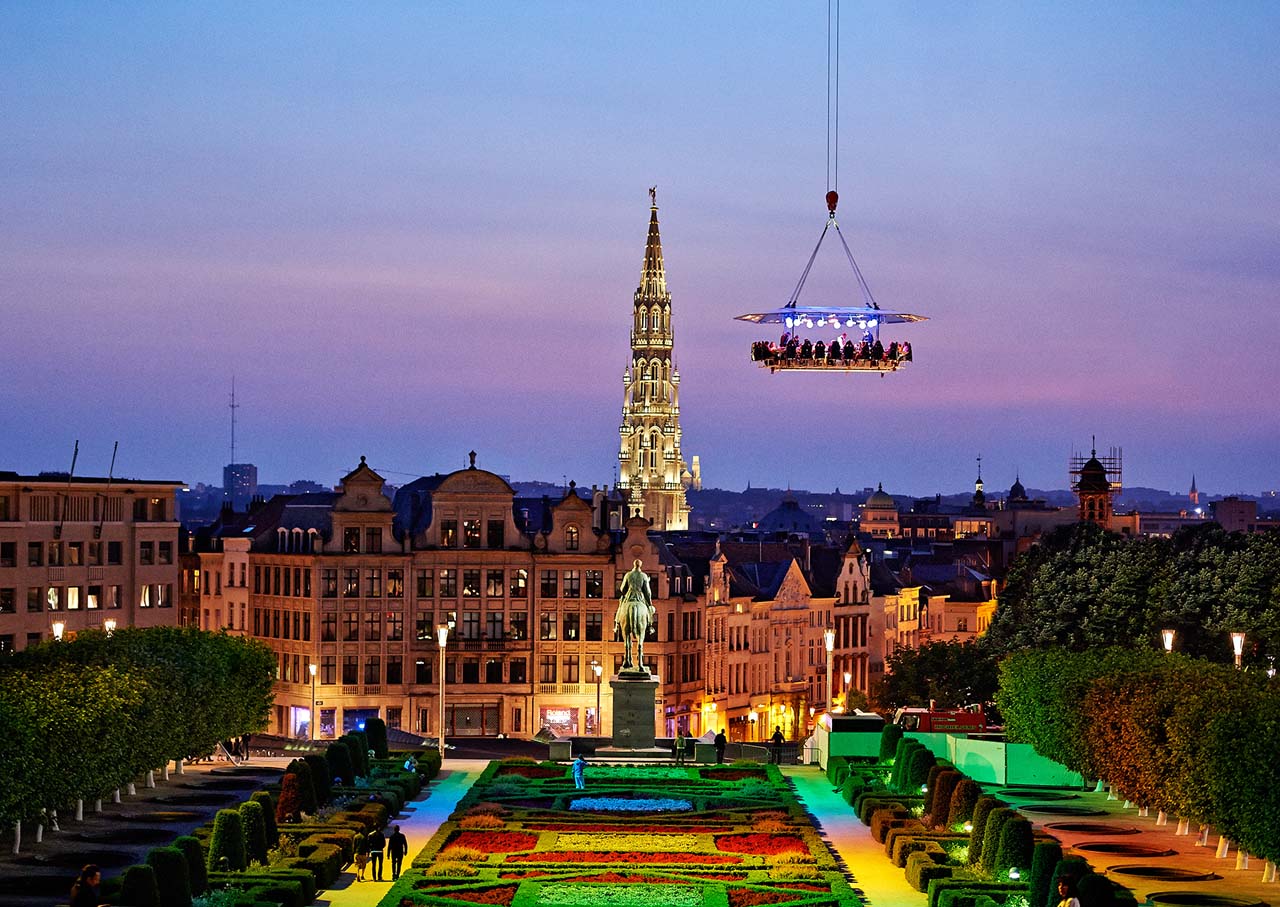 Plume is known for its innovations dishes like the Poached King Salmon Bento, marinated tableside in Amish beeswax (see above photo) and a part of the $106 prix fixe menu, as well as New Frontier Bison Loin served with heirloom eggplant and Shishito pepper. Oenophiles will be enticed by the U.S.’s largest collection of Madeira wine ( Jefferson’s favorite beverage), including a 1720 Borges Madeira priced at $1,720 for a one ounce pour. A bit pricey? Then order e Jefferson Cup, available on Plume’s “Hidden Menu” a $25 cocktail served in a smoky glass encasement and presented tableside. It includes Sercial Madeira along with Cardamaro, Domaine Canton, and black walnut bitters. e Wine Experience, for $270, includes four courses paired with dishes like White Asparagus Blanc Manger Coral with Triple Zero Caviar and Firey Squid Con t. Kids get to have their own “luxury” experience with a Michelin kids’ menu and a non alcoholic beverage cart with juices and fun child safe concoctions. 1200 16th Street NW, plumedc.com 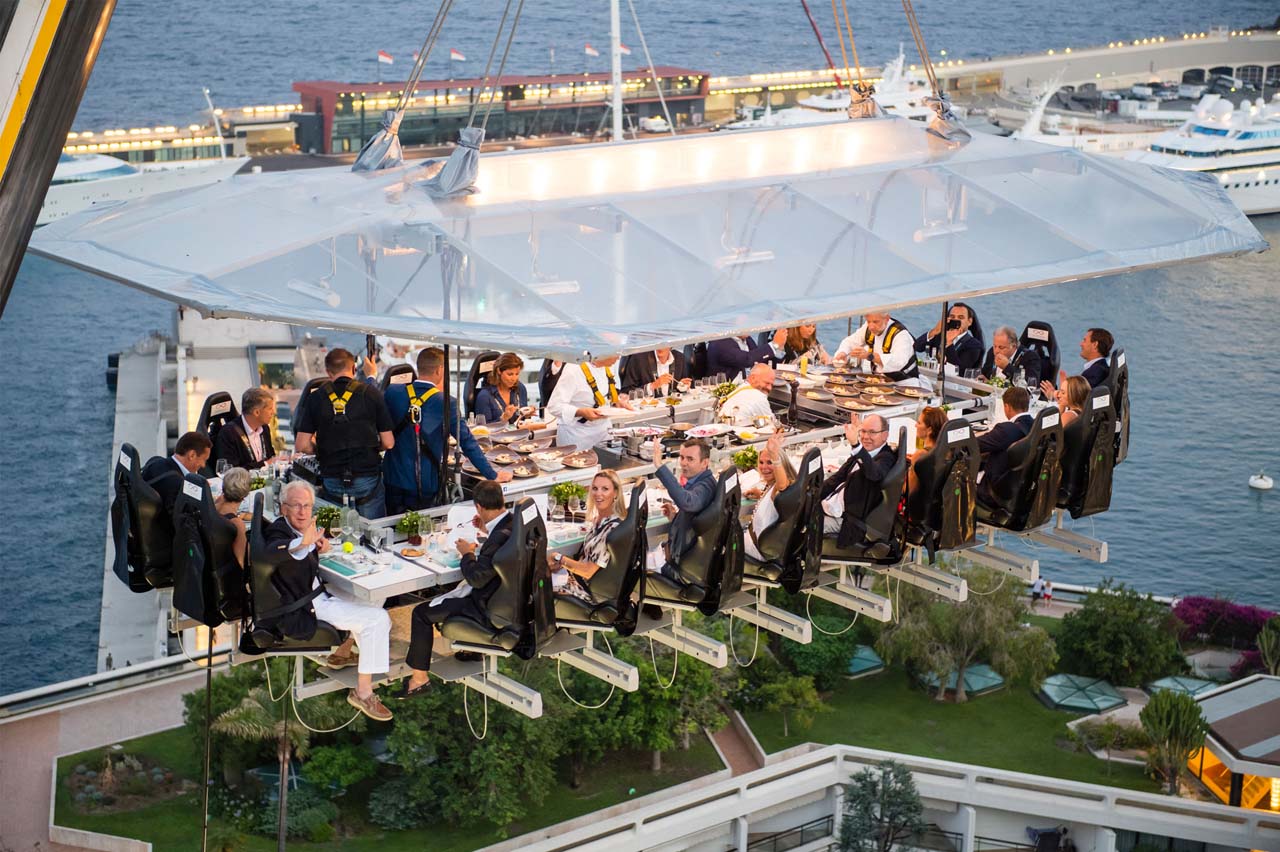 ONCE UPON A TABLE
Maldives, $$$
Twenty six ring shaped atolls comprised of 1,000 coral islands in the Indian Ocean the Maldives are a breathtaking destination. This former British protectorate (a republic since 1967) is also home to the luxury resort Soneva Fushi, which offers a notably exclusive and intimate dining experience at its newly opened restaurant, Once Upon a Table. Housed within a larger overwater structure called Out of the Blue, it’s only open on select evenings. 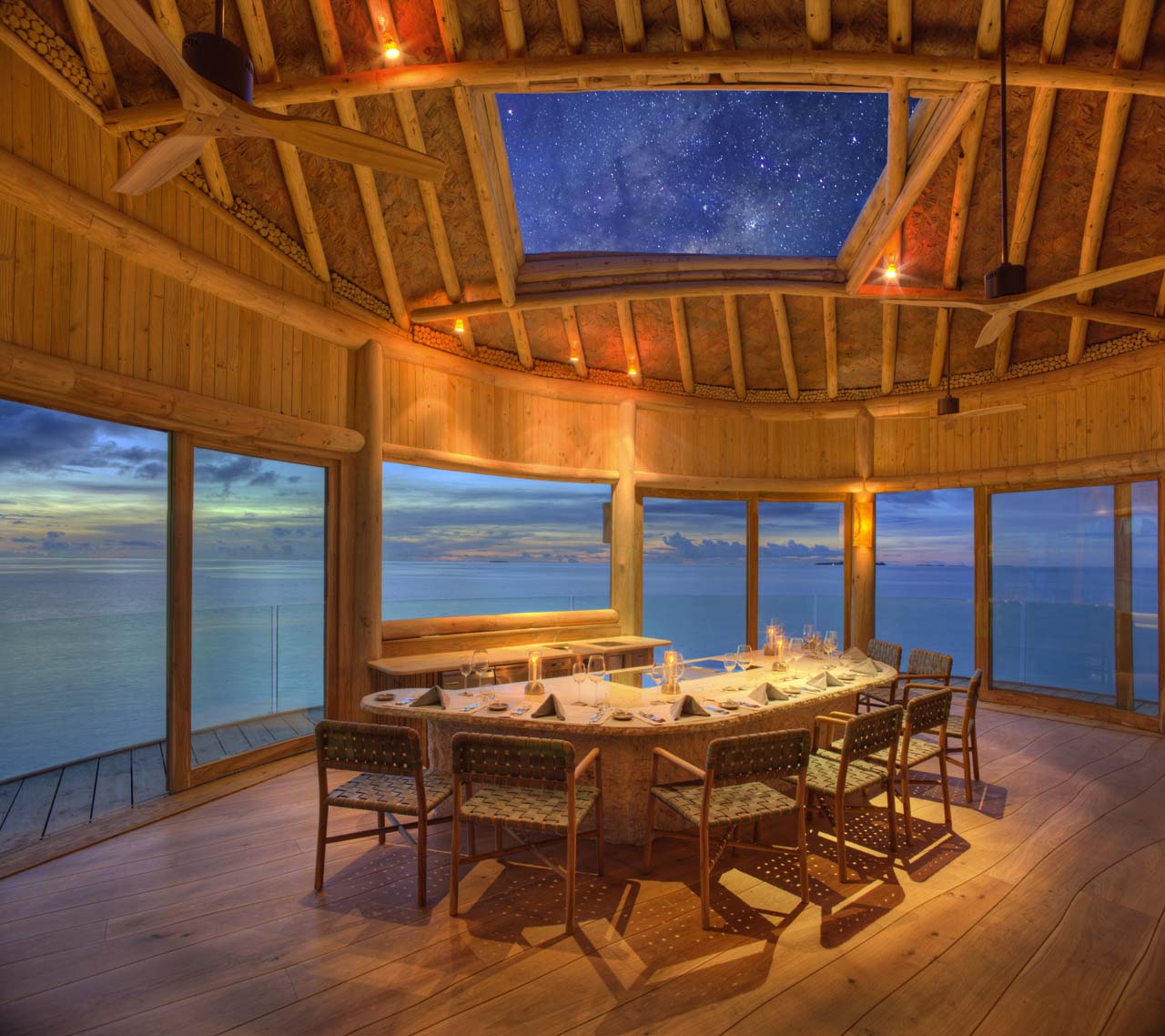 Floor to ceiling windows offer a perfect sunset view, and the ceiling features a partially retractable roof, so guests can look up at the stars while enjoying a meal. The horseshoe shaped table accommodates up to eight guests, who are served a rotating menu invented and reinvented by 30 of the best culinary minds in the world (there is no printed menu; things change too fast for that). Masters in the lineup include Michelinstarred chefs as well as those from San Pellegrino’s Top 100 list.

Past entrees include roasted Hokkaido scallops with dry martini sauce; risotto with duck leg breast made with coffee powder and beetroot cream; and Royal Belgium caviar served with plankton crème and rice cracker. Kenji Gyoten, the youngest three Michelinstarred chef in Japan and one of only four sushi chefs with three stars, will be in residence from November 10 to 17, and January 31 to February 16 of next year. (Kenji’s restaurant in Fukuoka, Japan, Sushi Gyoten, currently has a waiting list of 12 months.) His gor geously dexterous knife work and other preparation precision make for a wonderful addition to the experience. Meals run $500 per person on average. Kunfunadhoo Island Baa Atoll, soneva.com/soneva fushi 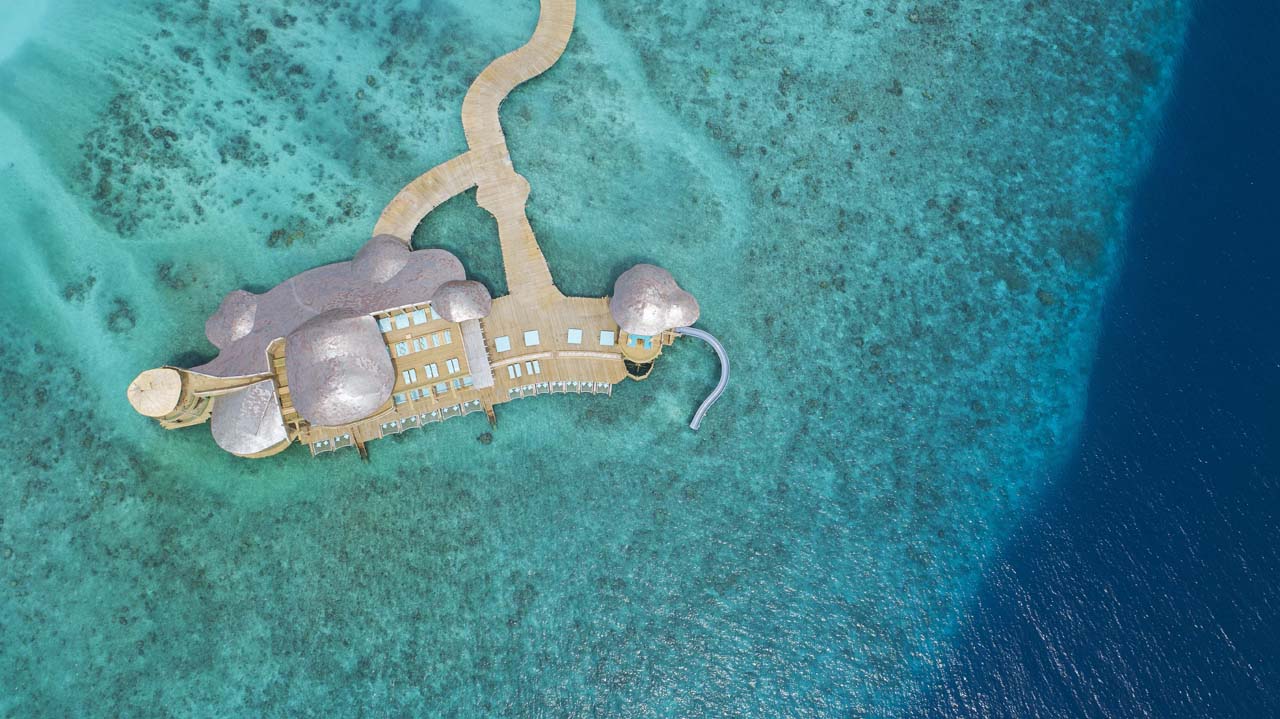 LA PETIT CHEF
Napa, CA, $$$
Napa has more than just good wine in the valley; its downtown, an emerging foodie destination, is also home to a world spanning and globally famous multisensory eating experience. Culinary Institute of America at Copia’s Le Petit Chef is an interactive 3 D dinner show that pairs art projection technology with fine dining. The six course menu takes guests on a global journey across regions the famous explorer Marco Polo visited when he discovered, among other things, some of the most amazing spices ever introduced to Europe all tied in with an extraordinary sequence of dishes. 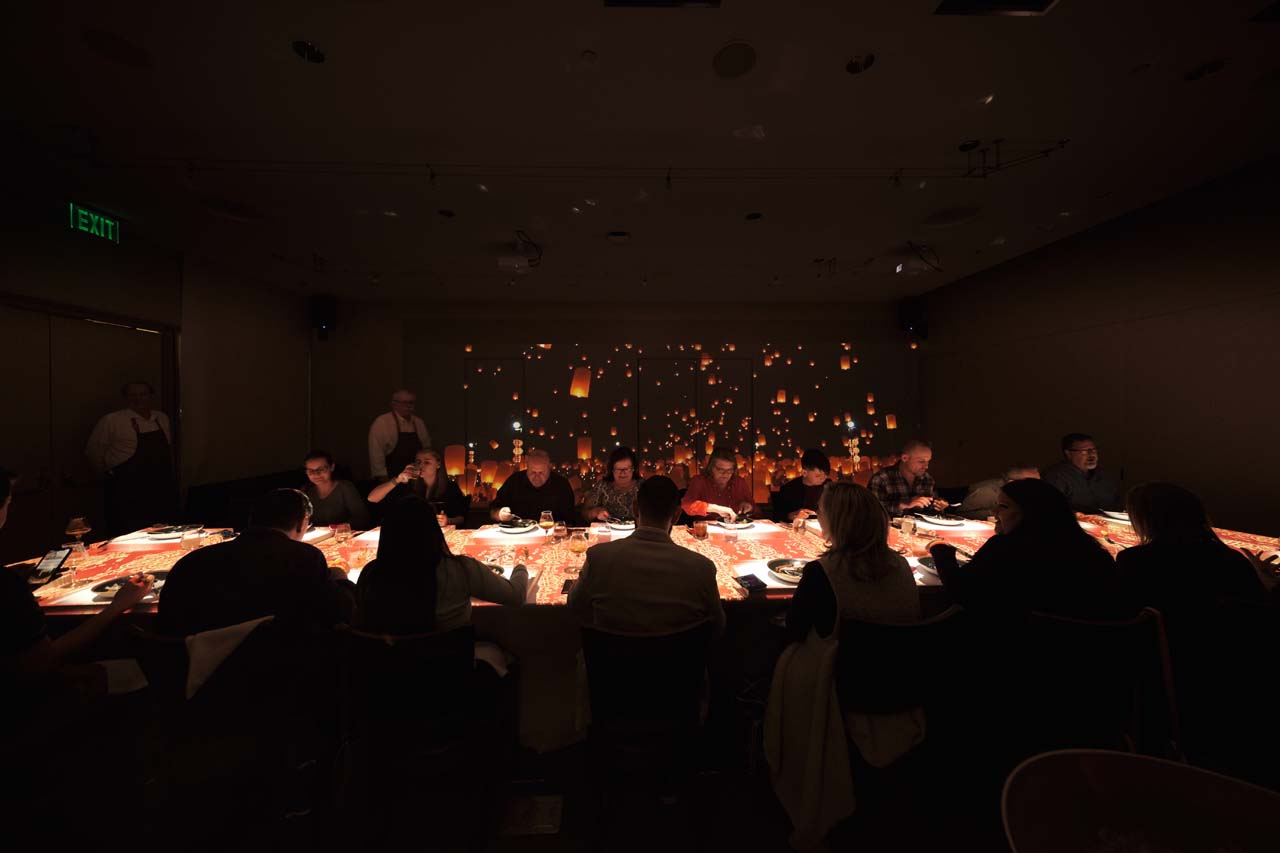 Located in the thriving Oxbow district, the immersive two hour, six course dinner uses visual storytelling through flavors, ingredients, sights, and sounds. First course takes guests out into the open sea (ocean waves are projected onto the table) its serving “chest” presenting an ahi tuna crudo and duck liver pâté, as pouches with spices are passed around and diners are encouraged to guess which were used. Entrees like tagins with roasted pistachios, coconut curry shrimp, and duck braised in red bean paste are inspired by Morocco, India, and China. Guests create a smoking dry ice effect in one course featuring citrus sorbet and yogurt a Himalayan mountains themed pallet cleanser (keep phones at the ready to capture the multimedia majesty here). Tickets are $140 per person, plus $50 for an optional wine pairing. 500 1st Street, Napa, ciaatcopia.com Images 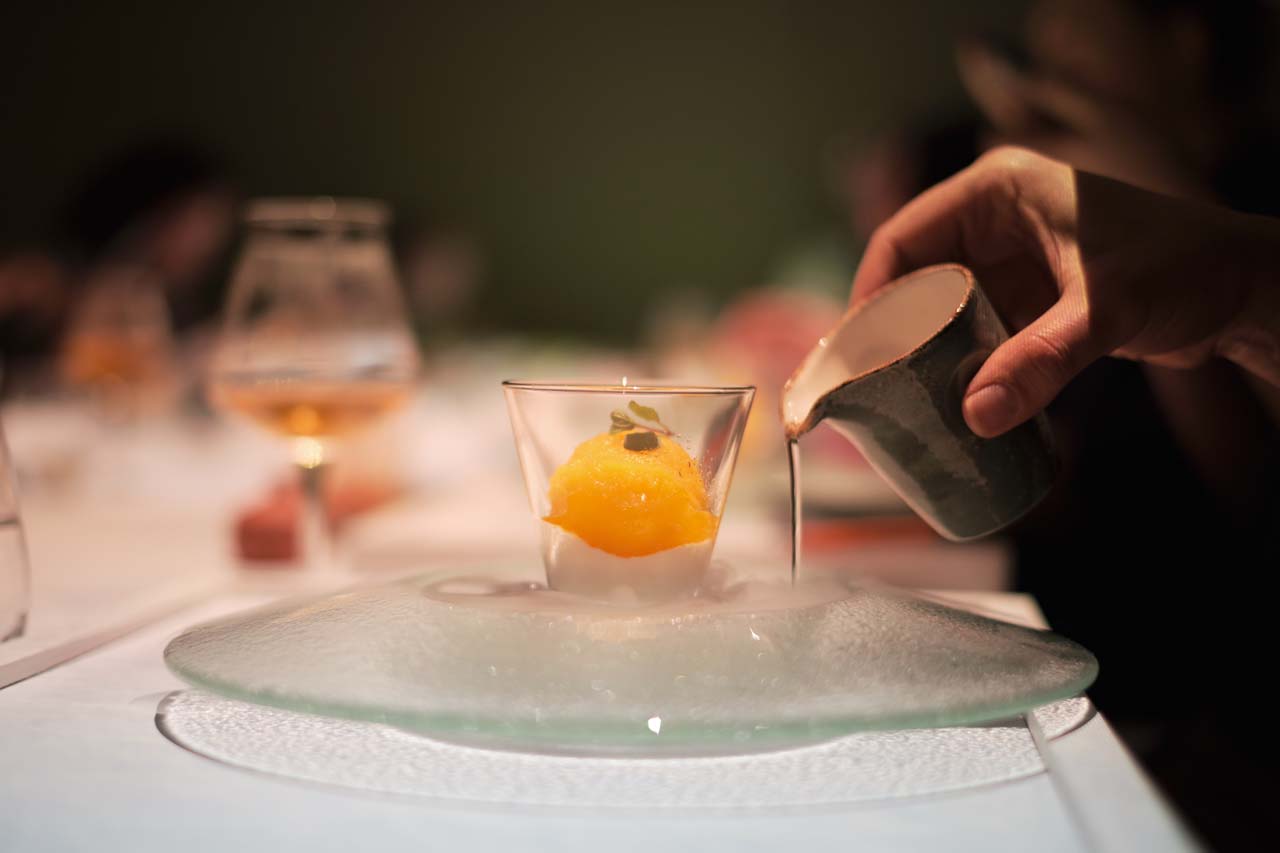 FEAST AT MOKAPU
Maui, Hawaii, $$$
Andaz Maui at Wailea Resort delivers a farm fresh seasonal culinary experience utilizing the unforgettably rich favors of the second largest Hawaiian Island. Bring your hunger to a 15 course luau t for a king and queen a beautifully curated cultural and culinary combination set on the grassy lawn adjacent to Mokapu beach. While feasting, guests are taken on a journey through Polynesian history (including ancestors arriving to Maui and making it home) while learning about Hawaiian values that focus on the love of, connection to, and kuleana (responsibility) to the land. 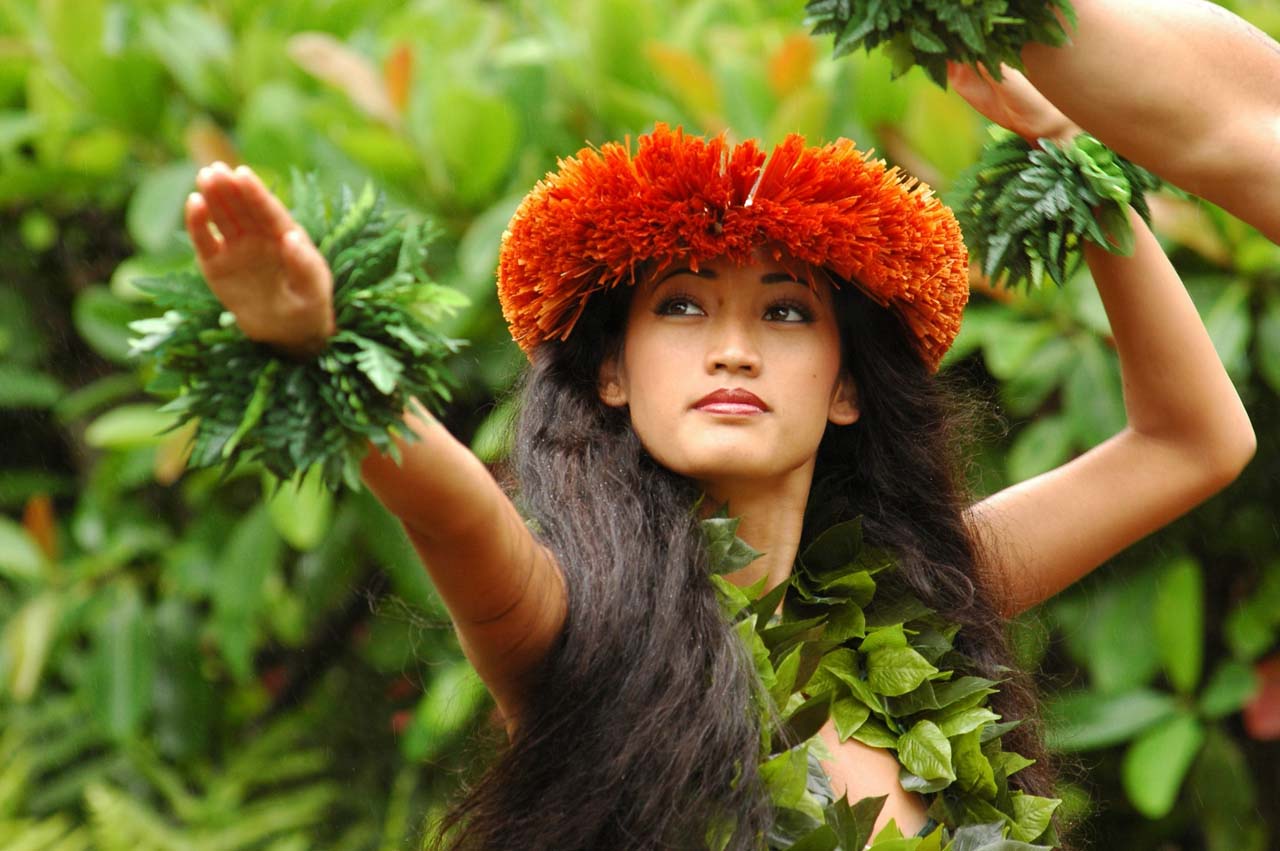 The ohana style (to be shared) dinner is plated and executed by Executive Chef Isaac Bancaco of the acclaimed restaurant Ka’ana Kitchen on the resort (voted 2014 Chef of the Year by Maui No Ka Oi Magazine). Traditional dishes include ahi poke, traditional poi from Waikapu, cured beef poke, mushroom salad with sugarcane vinaigrette, and grilled ’ulu (breadfruit) salad with macadamia nut dressing and these are just part of the first course! Sunday and Tuesday evenings. Premium seating for adults is $250 (“classic” seating $200) and places for children at both levels are $40. 3550 Wailea Alanui Drive, Wailea, andazmaui.com 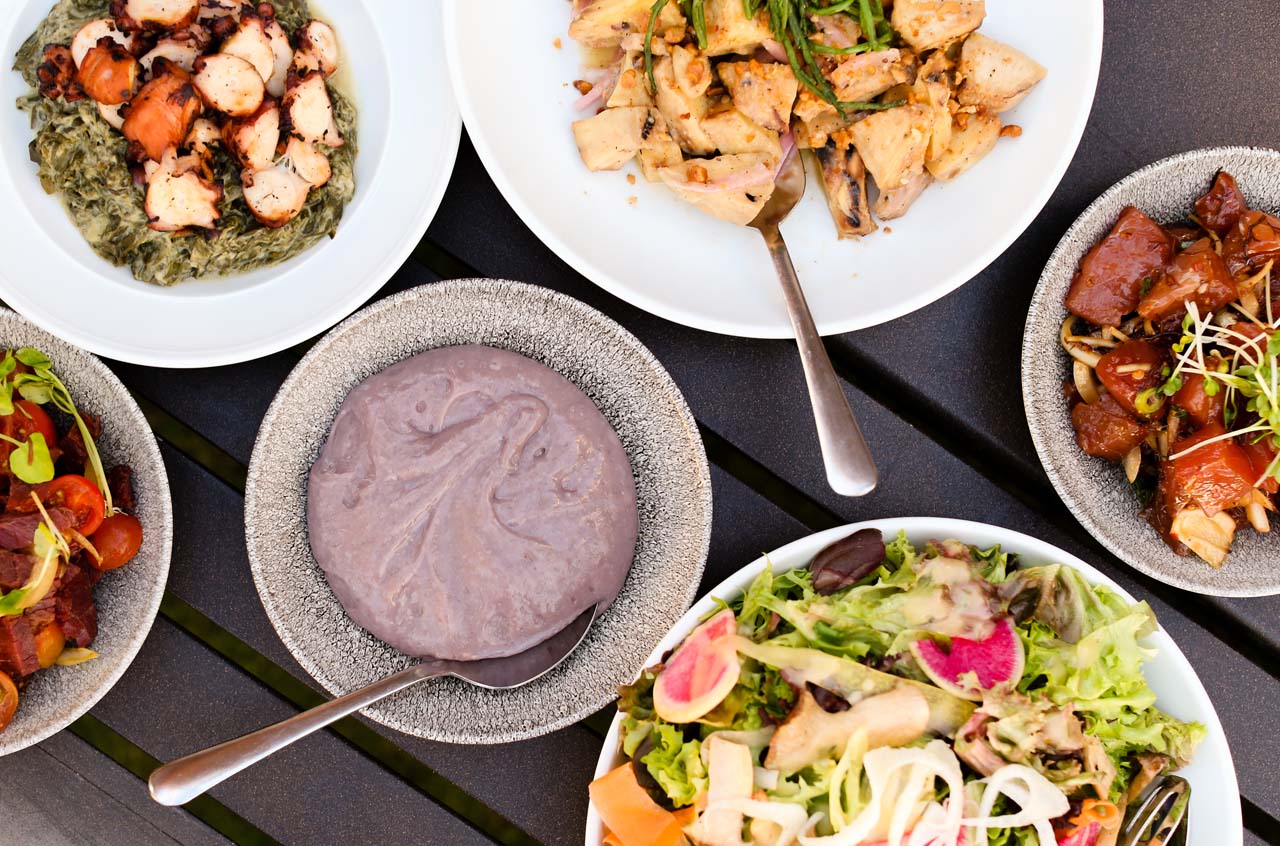