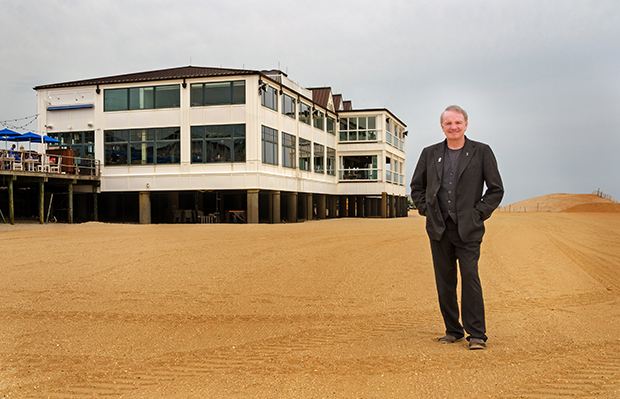 It was New Year’s Eve 1986 when Tim McLoone took a chance and purchased his very first restaurant.

“I was a lifelong musician with no money and absolutely no business buying a restaurant,” the now-esteemed restaurateur said during a recent phone interview, detailing his hasty entrance into the industry, which came as the year was closing and the country’s new tax reform act was going into effect. Hours before capital gains taxes skyrocketed, McLoone secured ownership of the time-honored Rum Runner piano bar on the Shrewsbury River in Sea Bright.

“I had played there before with my band and thought it was a great place,” McLoone recalled. “It had closed up and was for sale, so I thought if I bought it I could continue to have a venue for my music, so I kind of just started this whole business on a whim.”

McLoone stuck with the location’s original name because “…everyone knew where the Rum Runner was,” but added his surname to the awning in order to establish that some changes had been made to a business that had been steadily failing.

“I was a 39-year-old guy who had been sitting at the piano bar for years thinking I could run a restaurant,” he said. “I thought I knew how to make this place a success, but there was definitely a learning curve. And then the market crashed in ’87 and this stockbroker-heavy area was a tough place to be.”

But the bright-eyed owner and his Rum Runner survived… not an easy feat for an industry novice.

“I had opened a running store in Fairhaven in 1976, but that was my only other business experience,” McLoone said. “I knew this music thing was really a high-wire act and there was very little chance I could actually make a living performing. I was a little late getting into the restaurant business; now my only regret is that I didn’t start sooner.”

Schooled at Harvard and accomplished in music, athletics, and business, McCloone was an All-American runner in college who parlayed an interest in athletics and entertaining into a career as a sports announcer. He has an extensive resume of broadcast and directorial work, and also served as an announcer at The Meadowlands arena.

After taking over the Rum Runner, he focused on offering an upscale dining atmosphere for the whole family.

“One of my goals was to make sure a person of modest means could come in and find something delicious and affordable,” he said.

McCloone also carved a niche in the market as a venue for famous local musicians. Bruce Springsteen, Jon Bon Jovi, Southside Johnny, Bobby Bandiera, as well as his own band, Tim McLoone and The Shirleys, became regulars on the stage. His piano bar was voted number one on the Jersey Shore for many years, but after celebrating its 25th anniversary, the business was hit hard by Hurricane Sandy. Rebuilding efforts are already underway, and a reopening is planned for 2015.

“I think reopening the Rum Runner is just a small part of this community’s rebirth, but I have been playing music in Sea Bright my whole life, so we’ll play any little part we can to bring back the vibrancy,” McLoone said.

“For 17 years, the Rum Runner was my only endeavor,” he added. “But in 2004, I was presented with an opportunity to open another location at the Pier Village project in Long Branch.” McLoone’s Pier House, a more casual version of his original venture, opened in May of 2005 in the Pier Village enclave, and features oceanfront dining, banquets, outdoor dining, two bars, and live music many nights of the week. McLoone’s Woodbridge Grille was constructed in 2007 in a new off-track wagering facility after the restaurateur partnered with The New Jersey Sports and Exhibition Authority. And in 2008, he joined national developer Madison Marquette to launch a two-level venue—one floor a posh supper club, the other a more casual grille—as part of the rebirth of the iconic Asbury Park Boardwalk.

“We were so proud to be a part of that rebirth,” he said.

The launch of McLoone’s Boathouse, on the shores of the reservoir with the South Mountain Recreation Complex, and McLoone’s Bayonne Grille in the New Jersey Sports and Exposition Authority’s Off-Track Wagering Facility, followed. The company’s first venture outside of New Jersey, McLoone’s Pier House at National Harbor on the Potomac River, opened in June 2010. In 2011, McLoone’s Boathouse in West Orange opened on the South Mountain Reservation alongside the reservoir, and CJ McLoone’s, featuring an intimate, American tavern experience for the entire family, was also recently launched.

“People give me all this credit for opening restaurants, but building these brand new properties on the beach have been such wonderful opportunities,” McLoone said. “We have such success because the landscape simply speaks for itself.”

And by year’s end, the owner is planning on several new openings, bringing his tally of locations to eleven.

“We’re going to be opening up in Hoboken, right on the Hudson River opposite Manhattan,” he said. “And we’re planning a Red Bank location right on Broad Street.”

But for McLoone, who resides in Little Silver with his wife Beth and four children (Molly, Jack, Connor and Hannah), owning and operating a restaurant empire is just a slice of his life. A generous philanthropist, he started Holiday Express in 1993, a charitable endeavor which brings holiday parties and presents to homeless shelters, soup kitchens, long term psychiatric facilities, and other needy institutions.

“I had been working with the New Jersey Nets basketball team, and one of the players was organizing a Christmas Eve dinner for a group of poverty-stricken people in Newark. It was such a wonderful experience that the next year I decided to get involved in organizing the event. I think we brought a boom box and played some Johnny Mathis cassettes. I was determined to make it grow and have some live music the next year.”

Twenty-one years and more than 900 holiday events later, Holiday Express has grown to be one of the state’s largest charitable functions.

“Last year we started ten days before Thanksgiving and did 64 events in 40 days,” McLoone said. “It’s the biggest floating holiday party you’ve ever seen, with a live band, thousands of subs made by Jersey Mike’s, and hundreds of volunteers making and giving out gift bags and spreading the holiday spirit.”

In addition to his philanthropic endeavors with Holiday Express, McLoone has also enjoyed a close relationship with the Boys and Girls Club of Monmouth County as well as The Valerie Fund at Monmouth Medical Center of Saint Barnabas Health. In November of 2009, The New Jersey Restaurant Association presented him with its annual Gold Plate Award which is given in recognition of current and outstanding service in the industry and community. In March of 2010, he was honored as “Irishman of the Year” by The Friendly Sons of Saint Patrick.

And all of this entrepreneurial spirit and community involvement started simply because of the owner’s love of music.

“I just wanted to have a place to play with my band,” McLoone mused. “I’m so glad I found one.”