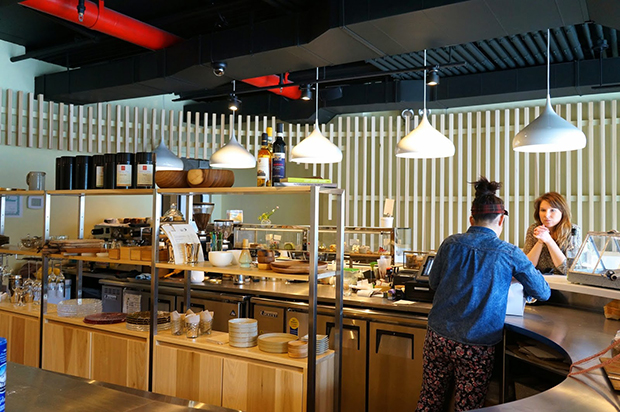 Williamsburg’s a crazy quilt of old and new, traditional and modern. Fitting, then, that within one of its mirrored high rises is a tiny patisserie where old-style French baking meets sleek Japanese sensibilities, and does so beautifully. Patisserie Tomoko opened its doors in November 2013—owned and operated by Tomoko Kato, a patissier with an admirable resume that includes Le Bernardin and The Russian Tea Room. Her shop’s charming warmth—with flowers, Hershey’s-Kiss-shaped pendant lights, and blonde wood paneling—is a draw, to be sure, but it’s the U-shaped bar’s cozy intimacy that seals the deal.While ruminating over what to order, patrons can watch Kato and her assistants as they press rounds from tart dough, dish out ice cream, carefully assemble desserts, torch a brûlée, and scoop freshly-cooked sweet potato into the bowl of a food mixer. (“Everything is from scratch,” she emphasized.) All of the chefs take great care in their work, and it’s fascinating to watch. Somehow the result manages to be beautiful but not overly fussy. Maybe that’s just efficiency at work, maybe it’s because there’s no distance between chef and patron—but either way, it’s riveting.The shop offers a la carte and takeout desserts as well as a dessert prix fixe of two or three courses (with or without a wine, coffee, or tea pairing). Between spoonfuls of the threecourse menu and typing sticky-fingered notes, we asked Kato questions. When are you busiest? “In the afternoon, when people come in for something to go, and weekend nights, of course.” Do you decide what to make based on the seasons? “Yes. Like the pumpkin tart—I waited to make it. The squash [had been] too hard.”

Patrons can be grateful that she held off until now, because the tart—made with freshly roasted Kabocha pumpkin, served warm in a buttery flaky tart shell—was sublime. More standouts include mascarpone ice cream, served with mixed berries and mixed berry compote, and yogurt with what Kato calls “grapefruit soup”—a juicy, not syrupy, compote. Both dishes are a successful contrast of richness against brightness.The pairing of salt and chocolate is currently a darling of chefs, which is fine because it’s a great idea. Kato’s salted chocolate sorbet, made with 64% cacao Cacao Barry French chocolate and topped with plain kataifi pastry, is smooth and dark, with a low-key zing of salt. Her French-style macarons are lovely, too, especially the lavender mint, with its tingly fresh mint shining through. (“Yielding on the outside. Really good,” said patron Casey Okamoto. ) The Japanese-style desserts were also unusual—including mochi made with cherry leaves and green tea crunch, but the black sesame crème brûlée was the knockout. Smoky, creamy, and dark as ash, it is paired with a delicately sweet sake ice cream. The American palate is used to desserts that are oversized and cloying. Kato, by contrast, with her command of European/Japanese subtlety, strikes a welcome balance of sweet and savory. Her pastries may well have a hand in educating dessert-goers and elevatingstandards, but in the meantime, they’re just delicious.