TO THIS SHEEPSHEAD BAY RESTAURANT OWNER, FISH PREPARATION IS AN ART FORM FUELED BY SIMPLICITY AND TRADITION

On this Monday evening in late June, the street front along Emmons Avenue in Sheepshead Bay is free of obvious traffic; Tucker Place, a diminutive city park that brushes up against Stella Maris Bait & Tackle, contains a few scattered families, and the Bay’s small fleet bobs languidly in the water facing Manhattan Beach. Outside the bait shop, a small flock of boat owners and local fishermen share conversation and drinks in the shade, a car passes slowly in search of parking, and the avenue one of the neighborhood’s four main shopping thoroughfares is otherwise still. 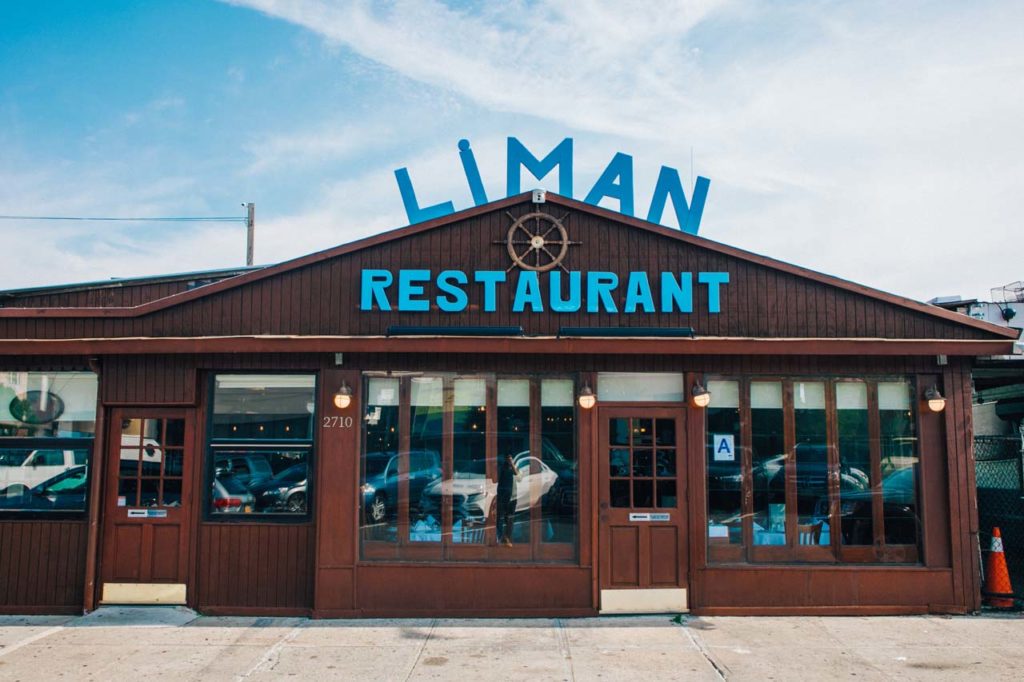 Inside Liman Restaurant, one door down from Stella Maris, the atmosphere is much the same. The simple, wood paneled building opens into a quiet atrium below a sign announcing “Grilled Fish House” in letters that follow the angles of a pitched roof; behind a modest glass case, whole salmon, dorado, branzino, and other catches lay clear eyed in elegant patterns on a bed of glistening ice. A server emerges to briskly collect drinks from a bar, whose two occupants talk over a selection of small plates: whipped codfish roe, charred eggplant purée, and grilled octopus and tomatoes. The server departs and the bar resumes a hush. Shortly beyond, a few steps down a brief hallway, the scene changes entirely.

Yusuf Basusta, the Turkish owner and founder of Liman, moves nimbly through his spacious pier side dining room where there is not an empty chair to be found, and not, that I can see, a table that seats fewer than four. Party after party crowd tables ten feet long. Servers rush trays bursting with whole grilled fish in the narrow gaps between busy diners. Under the room’s retracted roof, open to the still high summer sun, Basusta threads the packed seats, greeting one guest and then the next by name and with frequent handshakes. A young, bearded man, every inch the trendy Brooklyn father, pauses as his family is being seated to cross the room and greet Basusta himself.

Founded twenty years ago by Basusta at a time when Turkish cuisine in New York City was bound by the familiar tropes of kebab and shawarma known to every Manhattan intersection, Liman is as much an obscurity as it is a Sheepshead Bay institution. 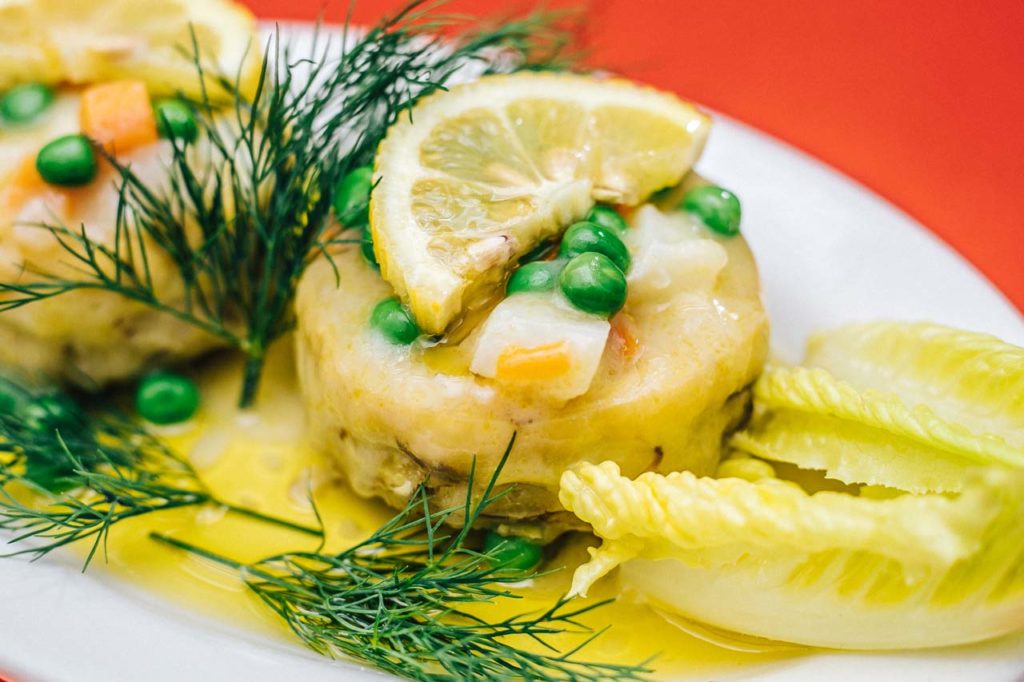 In this neighborhood, there were no fish restaurants,” he said. “For the first three years, I was going to the market myself and bringing my own fish back. I made the menu, I displayed the fish, but I didn’t know if it would succeed because people in the area were used to kebabs and Italian food.”

Basusta comes from a tradition of family restauranteurs in the small town of Rize, on the northeastern coast of the Black Sea. “My background is by the water,” he explained. “Fish was a hobby that I liked and I decided not to follow all the other Turkish restaurants, so took my restaurant experience and opened Liman.”

The owner arrived in Brooklyn in the early nineties, and a brief partnership with a cousin operating a modest restaurant followed. 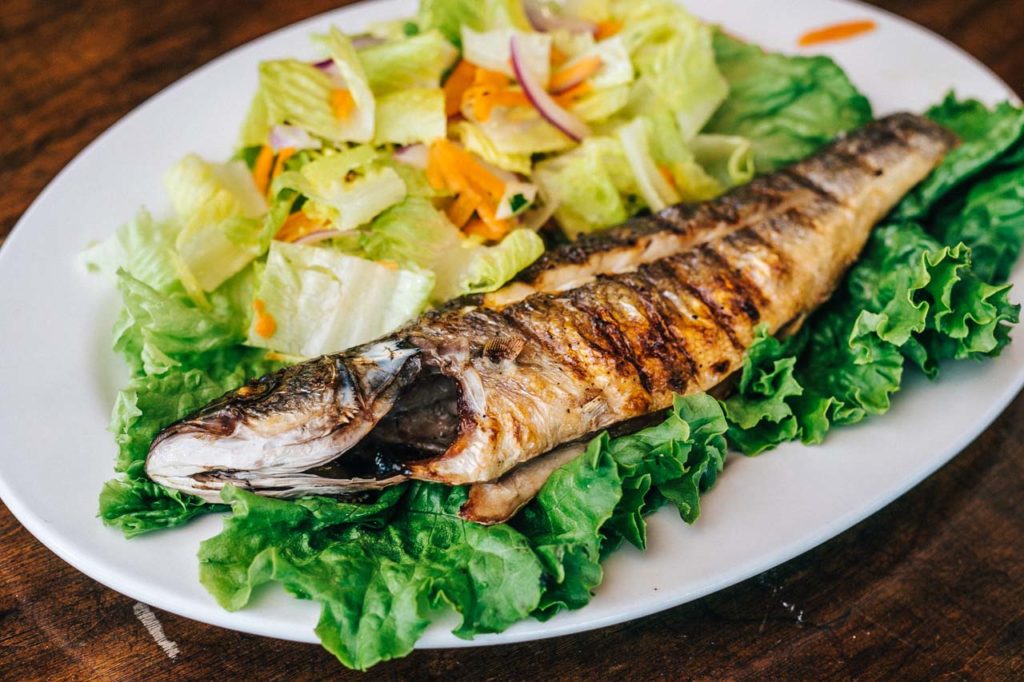 “That was my first experience in a Turkish restaurant in this neighborhood,” he said. “It was small, a fifty five seat kebab house, not many fish.” When the cousin departed for California, Basusta decided to fill an evident vacuum in the city’s Turkish cuisine. Leaving kebabs to more casual owner operators, he introduced Sheeps head Bay to the seafood he remembered from childhood. “I was preparing it in a very natural way, but each country has its own way of preparation. In the U.S., restaurants like to make only fillets. They didn’t want to deal with the bones.” Basusta did.

Liman took up the challenge of persuading its diners that there could be more to well prepared seafood than familiar boneless fillets, grilling, frying and serving fish whole. 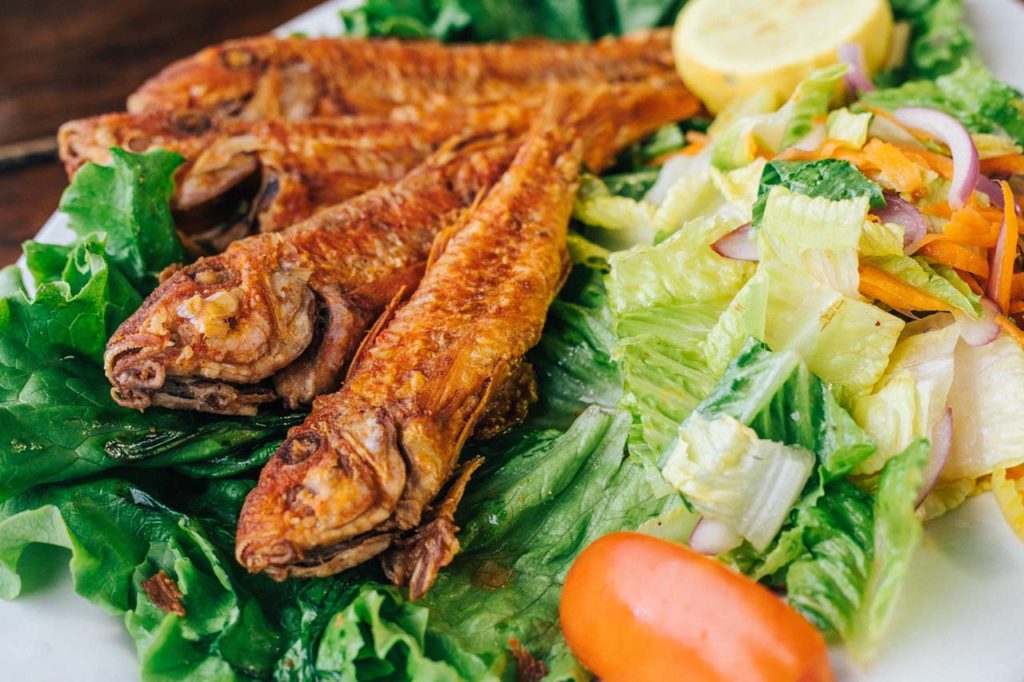 At first, when I was displaying fish in a live aquarium, it was hard,” he continued. “People didn’t want to see the head and the tail and the skin.” Little by little, patrons became convinced. “Now everyone asks for it that way,” he laughed. “People liked my preparation, with no sauce, no dressing. I put it on the grill with salt, pepper, and olive oil only. Or with a little bread if people want a pan fry. I don’t do deep fry; deep frying kills the fish.” 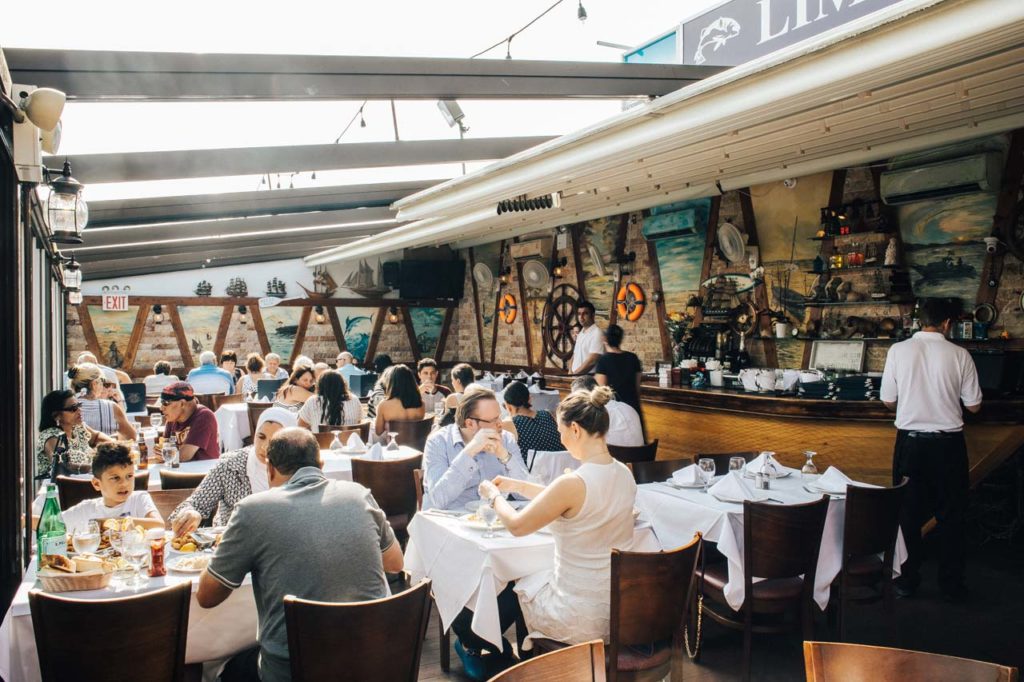 Another Basusta standard calls for every fish to be prepared with its skin intact. “The skin is the best part,” he explained, “because the oil is between the skin and the meat, and it’s the oiliest fish that is the tastiest. So even fillets I grill with the skin on so we don’t lose anything, and it’s more flavorful. Over time people came to like it.”

The simplicity of Liman’s method extends to unassuming seasonings.

“As in most of the Mediterranean, our preparation is the plain, natural way,” he said. “Our ingredients are lots of olive oil and lemon. These are parts of nature and people’s daily lives. That’s all I use.” The owner’s philosophy is that each fish has its own flavor that should be the pinnacle of a dish. “This is very important,” he went on. “Some of them are quite fishy, some are mild; some are flaky and sweet, and some are hard and sharp.” As the talk turned to the kitchen, Basusta gestured warmly. “At the same time, each fish has to have the right preparation. Over centuries, people put together that certain fish are good for grilling, some are good for frying and some are good for baking. I continue this way of preparation in a plain, natural way.” 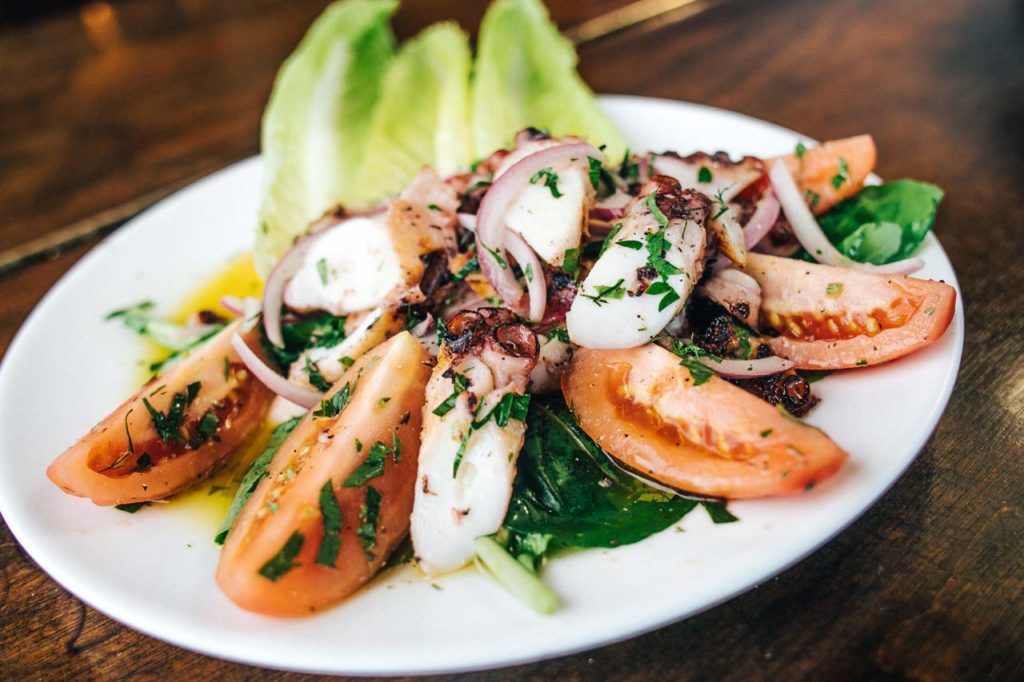 Liman became a success, and Basusta purchased the deli next door and expanded. Then, in 2012, Hurricane Sandy knocked it all down.

“I was closed for three months,” he said. “I renovated everything…built up to the waterfront, and installed a retractable roof to make an outdoor space.”

It’s that outdoor space we are standing in as I watch Basusta mingle and consider the composition of a Monday evening clientele. Thirty to forty percent of customers come from out of town, Basusta tells me, and to judge by the easy recognition with which each table he approaches meets him, his reputation has clearly cemented itself past the boundaries of Sheepshead Bay. 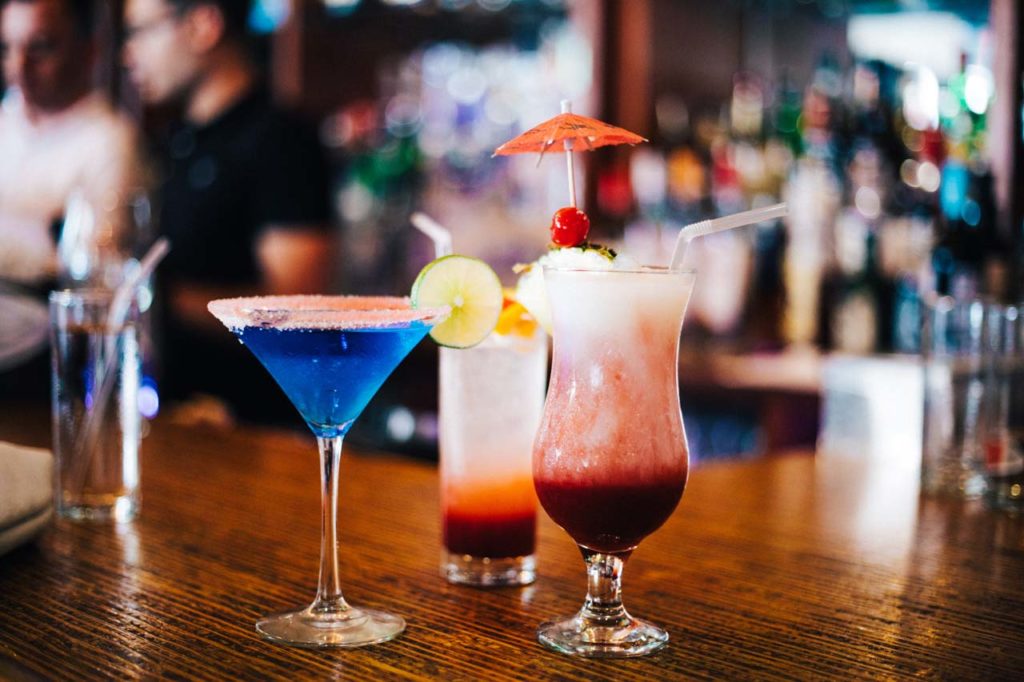 “We have our name,” he told me. “We have our success. There are only a few Turkish restaurants in New York owned by people with restaurant knowledge. The thing is that fish is hard. With fish, you need to be very professional, you have to understand the quality you’re buying, how you keep it, how you prepare it. It’s very hard work. But this is my background. This is what I do.”