Set in His Ways 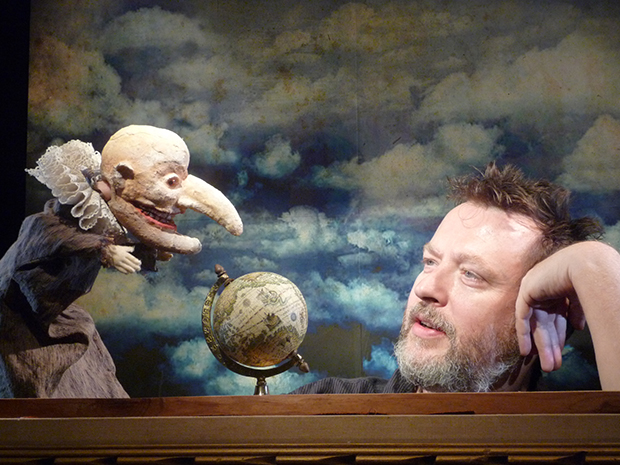 Peppering the Windsor terrace home designer, director, writer, and teacher Julian Crouch shares with his wife, actress and educator Vicky Finney, and their two young sons, are members of his puppet family: a Don Quixote-esque marionette and hauntingly realistic,gnarled little gnomes among them…and a real-live cat named Spooky.The man who provided deliciously macabre set designs to Broadway productions like The Addams Family, ShockheadedPeter,and Hedwig and the Angry Inch was born in Yorkshire, UK, though grew up in Ayr, on the west coast of Scotland. “I made masks and puppets throughout my childhood,” he recalled. “In those days, children had hobbies, and mine was art.”Crouch had no formal training, which didn’t hold him back.

“I learned early on that I didn’t like being taught in a classroom,” he recalled. “The work I did at school was not nearly as compelling as the things I made in my bedroom. But my college lecturers had a dim view of my external activities, and convinced me that I was lazy and had little prospect of gaining any kind of meaningful employment.”After studying art history at the University of Edinburgh, Crouch turned to mask-making, which he found therapeutic. Upon amassing an impressive collection, he took them to local theater companies—in two black trash bags.“One day, the Trickster Theatre Company came to a venue where I worked at the box office,” he said. “I noticed that they used masks in their productions, so out came my bin full of masks. A local arts council representative then arranged for me to receive a scholarship to move to London and become apprentice to Trickster, where I made masks and puppets.”Crouch also sat in on rehearsals and learned about lighting design. “Trickster’s tours took me all over Europe, and introduced me to friends and artists I still collaborate with today,” he said. This was the beginning of a strange and wonderful journey that eventually led him to design puppets, masks, and sets for ballets, operas, and theater companies worldwide. This summer found Crouch in Salzburg, remounting his production of Jedermann, an Austrian version of the Medieval play Everyman. “It’s a big tradition in Salzburg and has played there almost every summer since 1920—except when Hitler was in power,” he explained. “I was the first non-German speaker asked to direct. I also designed the sets and wrote some of the music.”

While in Austria, Crouch also designed a production of Dreigroschenoper, or The ThreepennyOpera,which he’ll codirect in Salzburg in 2015—just a few of multiple projects in the works, both in the U.S. and abroad. “I designed sets and costumes for a new opera of The Little Prince, which will open in Lausanne, Switzerland in November,” he added. “I also designed sets for The Metropolitan Opera’s The Merry Widow, which opens on New Year’s Eve.”Also down the pike is a children’s picture book of Jedermann, readying an installation of his work for Chelsea’s Dillon Gallery, designing sets for the Joffery Ballet’s The Nutcracker,and an as yet unspecified opera for La Scala in Milan. Occasionally, a project doesn’t go as planned. Case in point: The Devil and Mister Punch, a fanciful twist on the Punch and Judy story with that unmistakable Crouch touch—devised, directed, and designed by the puppetmaster himself. Although Punchhad a sell-out run at the Barbican in London, it proved too expensive and complicated to go on tour, but all was not lost. “The puppets from that show became the basis for the Armchair Parade installation at BRIC,” he explained. Created with musician Mark Stewart (see January/February 2014 issue) and filmmaker RagnarFreidank, it was the first project developed in the borough’s BRIC commissioning and residency program, BRIC House Fireworks.Crouch creates the work in his Red Hook studio. “It flooded pretty badly during Hurricane Sandy,” he remembered. “I lost tools and an old upright piano, which was part of the Punchset. Fortunately, most of my work was stored higher. When I entered the studio the morning after, all of the puppets’ feet were wet.”Weather aside, the theater gypsy is contentedly based in Brooklyn, where he’s lived with his family since 2009. “There’s so much about the borough that reminds me of Glasgow,” he said. “We feel verymuch at home here.”But life is tinged with irony, Crouch pointed out. “Now that we’ve all moved to the States, I seem to be getting more offers from Europe these days!” 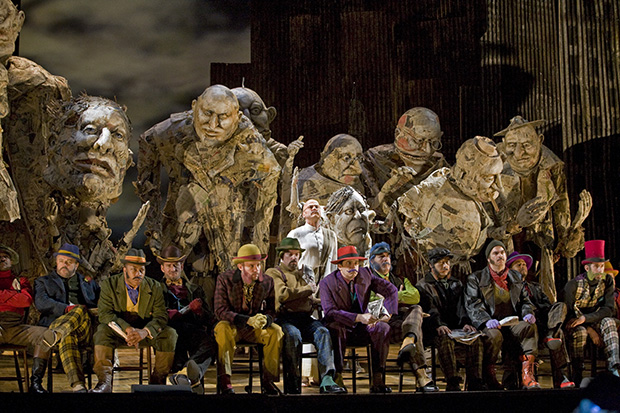