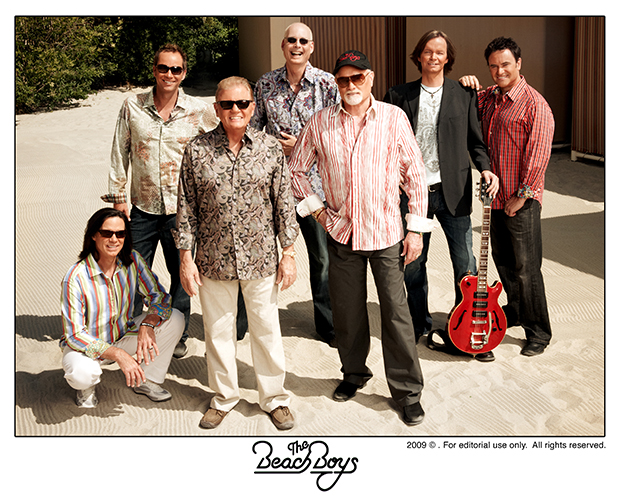 For more than 50 years, the Beach Boys have been synonymous with the sweet, good-feeling sounds of summer.

The tireless wayfarers, whose brash California surfer sound revolutionized pop music and redefined Americana, is far more than a fun time, however. Going to a Beach Boys concert is like surfing the biggest wave in the vast ocean of rock and roll.

As prolific as the band has been in creating luminous, catchy pop tunes like “Surf in’ USA,” “Good Vibrations,” “Wouldn’t It Be Nice,” and “God Only Knows,” it is even more impressive in its touring prowess.

The worldwide tour—one that stretches from Laguna Beach, CA to Tel Aviv, Israel—would be a remarkable achievement for any youthful up and-coming band, much less a group of mostly septuagenarians.

The group quickly found success by signing with Capitol Records in 1962 and performing on The Ed Sullivan Show in 1964.

Few bands in the history of rock were as creatively and commercially successful as the boys were over a five-year period. From 1962-1967, they released the singles, “Sufin’ Safari,” “Surfer Girl,” “I Get Around,” “Don’t Worry Baby,” “Help Me, Rhonda,” “California Girls,” and their groundbreaking experimental album Pet Sounds.

The group has sold more than 100 million records worldwide, and founders Jardine, Love, and three Wilsons were inducted into the Rock and Roll Hall of Fame in 1988.

In 2011, the band announced a 50th Anniversary Reunion Tour that was accompanied by the release of the group’s Fifty Big Ones greatest hits album. To mark the reunion, the group also released Live-The 50th Anniversary Tour, a massive 41-song multi-disc album that captured the historic swoop of the rock icons.

The band’s 2014 Tri-State performances promise to be as monumental as any of these live recordings.

It would usually be safe to assume that a band touring in the twilight of their playing careers would offer a subdued set list, with maybe a few bombastic moments peppered into a shortened affair, but the 2014 Beach Boys tour has turned that expectation on its head. Led by original member Love and keyboardist Bruce Johnston, this year’s shows have been packed with numerous greatest hits and timeless summer-themed covers, amidst a set list that hovers in the mind-blowing 37-40-song range. Ticketholders can expect 3-plus hours of what essentially amounts to a crash course in the history of hangin’ ten.