The Limits of Space 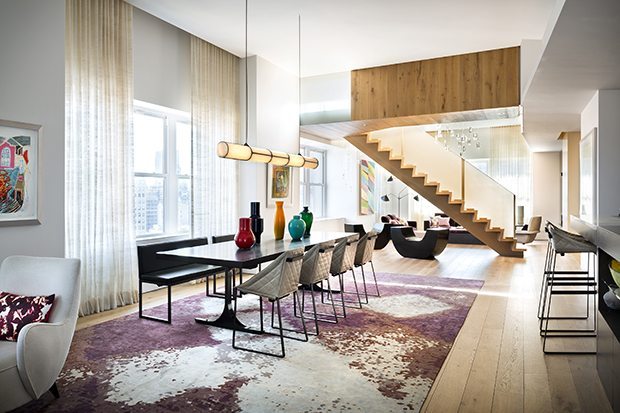 In renovating an enormous 5,000-square-foot former storage facility in Tribeca, designers were faced with how to build discrete living areas without inhibiting expansive city views

The average two-bedroom New York City apartment is approximately 800 square feet; compare this to the average size of an American home built outside of the city (2,600 square feet) and one begins to get an idea of the typical challenge faced by urban architects and interior designers. New Yorkers may earn more than the national average, but we tend to live in mobile home dimensions, however wittily conceived.

When BKSK Architects was asked to consult on this Tribeca space—the now-penthouse of a former refrigerated storage building in a historic district—they had the opposite problem. In a veritable canyon of a two-floor residence, there were 5,000 square feet to explore, its owners a pair of empty-nesters just beginning a new phase in their lives.

Stacey Jattuso, an associate of the firm and director of its interior design department, was faced with the task of converting a veritable blank slate into something at once spacious and intimate—structured yet airy, and which took advantage of a particularly enviable view scape in the building’s north-south axis. Joined by Gerry Ende, whose specialty in this project was furniture selection, they were confronted right away with one critical limitation of the building’s landmark status—an inability to alter relatively small windows.

“If we designed an interior space with 12-foot-high ceilings from scratch, we would not use standard six-foot windows,” Jattuso explained. “Nor would we design them with sills three feet high. Thirty six inches is essentially counter height, and presents a real visual impediment for residents—the view becomes frustratingly blocked at that sill height.”

Unable to change the windows, they changed altitude instead—raising the floors of the entire lower level (with the exception of the den) by eight inches. This considerable task had the payoff of making the space more residential in form and function, as well as amplifying the existing supply of natural light.

“The challenge then became, in this large volume of space, how to create individual intimate areas,” Jattuso observed. “Spaces that needed to be defined, certainly, but loosely enough that they didn’t feel obstructive.”

One such definition—perhaps the most challenging task of the 2.5-year renovation— was achieved by the removal of the old stair and the installation of a relocated one, complete with dynamic angles and semi-transparent tones.

“We knew we needed to provide a stair that was not only more aesthetically pleasing, but one that would allow a great deal more light to filter from the upper level and its associated terrace,” Jattuso explained. “We had to punch through two layers of slab to do it, but the results are wonderful, not least because of the extraordinary sculpture above the stair by Brooklyn-based Graham Caldwell.”

Both Jattuso and Ende made reference to the sculpture as emblematic of a sensibility throughout, in which structural metal and glass elements were integrated with both softer materials and a gentle color palette.

“The focus was on scale, craft, texture—the clients had a strong sense of color, so there’s a great deal of color variation within the space,” Ende said. “We also wanted furniture materials that had a high-end, luxurious quality to them, but still felt cozy and warm.” By mixing metal and leather, for example, the team established a comfortable sense of home that also linked architecture, furniture, and fixtures.

Ende pointed to the neutral leather Kekke dining room chairs, designed by Piet Boone and sourced through Lepere, as particularly appropriate examples of that link. At once structural, sculptural, yet comfortable, the chairs are light, versatile, and don’t interrupt the viewscapes within the room. Ende explained additionally that the U-shaped Huang Chairs underneath the stair (copper base, with multiple layers of lacquer) from Robert Kuo were intended to accomplish a similar mission: defining the space but not rising so high as to create their own partition.

“This idea is also represented in the living room in the white High Back Barrel Chair and ottoman by Vladimir Kagan,” said Ende. “They not only play off the rectilinear lines of the nearby sofas in their rounded, soothing shapes, but the chair is also relatively low, so as not to act as a view block.”

Identifying pieces that were homey but high-end, and sizable without inhibiting light and air, was an ongoing brain game throughout the project. Insight from Andrea Robinson of ASR Studios and Suzanne Randolph Fine Arts was instrumental to the process, as well as guidance from BKSK partner Joan Krevlin.

The furniture and art choices were not only a task in their conception and sourcing, but also in that a number of pieces were oversized, and not at all suited to the relatively small elevators supplying the building. The Black Knight dining room table by Hudson Furniture and the 30-foot Tania Johnson custom rug, among other pieces, needed to be hoisted by crane nearly 200 feet in order to enter the home.

“I’m not going to suggest that size was the defining factor in everything we did,” Jattuso said with a smile. “Let’s just say it influenced a number of our choices, and presented more than a few challenges. I will humbly say, though, that the effort was more than worth it; the result is a whole that, while enormous by city standards, feels approachable, intimate… very much a home.”